Tonight’s instalment of Coronation Street saw Ed Bailey (played by Trevor Michael Georges) confront Don, the new manager at the Bistro, as the residents of Weatherfield celebrated its reopening. Ed had been listening to vile racist remarks from Don while he’d been working on the restaurant’s renovation but tonight he had enough when he heard the manager refer to his family as “monkeys”.

Ed shocked the room when he revealed the abuse Don had been spewing at him and the jokes he was making at the restaurant’s reopening party.

It certainly caused a stir with Dev Alahan (Jimmi Harkishin) commenting on Ed’s confrontation in the Rovers Return.

Kevin Webster (Michael Le Vell) squirmed a little at the topic of conversation but Dev insisted it was an essential chat to have.

Dev went on to explain you can’t hit every racist, telling his friend: “Alright, well what about the next guy? And the one after that?

“It goes on and on. You can’t just go around smacking everyone who says anything.” 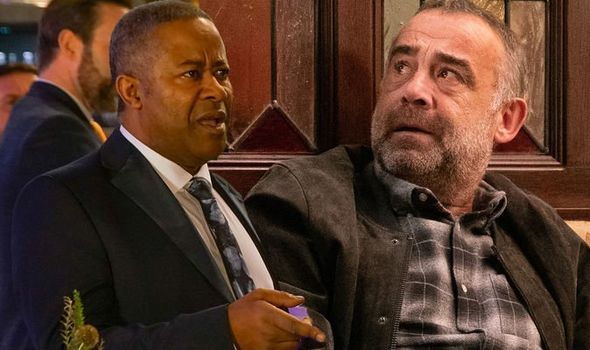 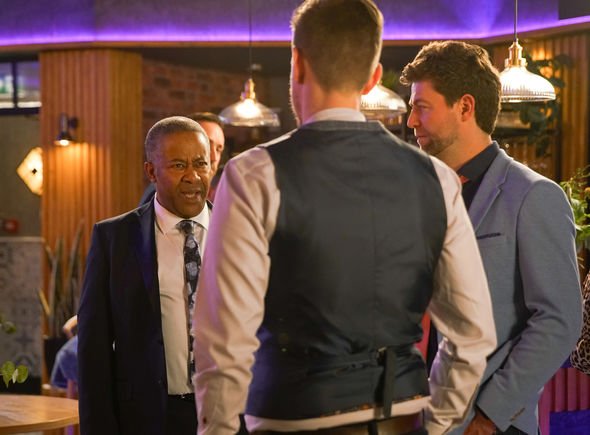 Kevin agreed and the pair continued their conversation at a table with Dev explaining is often ignored.

“Take football, guys, we all know what goes on on the terraces right?” Dev remarked.

“Just because a place has a racist in it, doesn’t mean everyone in it is a racist.”

“Yeah, well we don’t have many at Weatherfield County,” Kevin replied, which left Dev stunned: “Not many?”

Kevin continued: “No because if someone shouts something bad, they kick them out and ban them.” 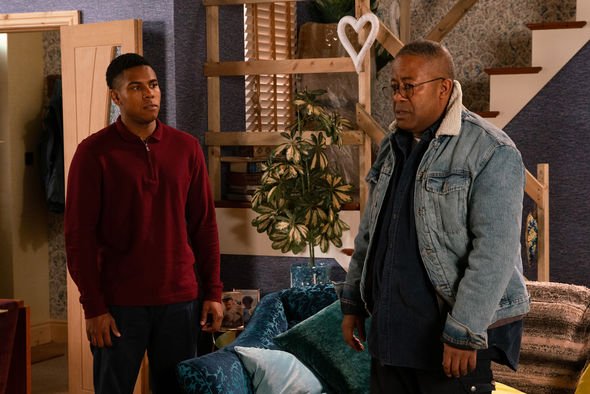 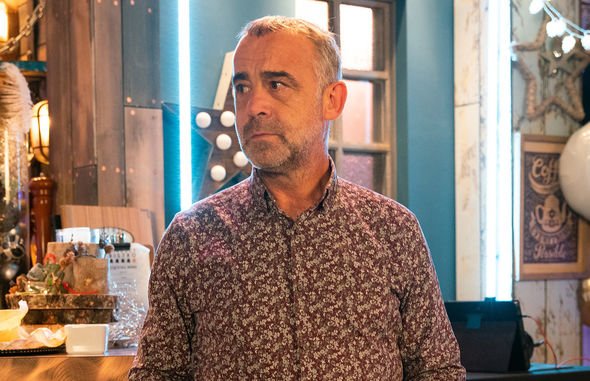 “Yeah but it still doesn’t stop someone from thinking it or saying it somewhere else where they think they can get away with it,” Dev hit back.

“Or if they’re with their mates like in the Bistro tonight.”

Kevin admitted he was “scared” of saying the wrong thing but Dev encouraged him to talk, listen and read about racism.

The mechanic went on to think about what Dev had to say while back at the Bailey household, Ed spoke to his son James (Nathan Graham) about his sexuality.

Ed and James haven’t been on the best of terms with the builder advising his son to keep his sexuality a secret.

He believes that by not confirming he is gay, he will be protecting himself from abuse on the football pitch.

But after confronting Don, Ed had a change of heart and told his son that he would stand by him if he opened up about his sexuality.

Coming episodes will see James come out at gay to his teammates at Weatherfield FC. He has already faced abuse online and next week will see someone joke about his sexuality.

While James laughs it off, when the supporters find out, they could hurl more abuse at the young player.

With Ed determined to stand by his son, he’ll no doubt be on the sidelines when he plays again and Kevin could be with him as he’s a big fan of the club.

If someone shouts racist abuse at James while he plays, Kevin could step up and hit back at the supporter, defending his neighbours.

But things could turn ugly with the racist supporter lashing out at Kevin – could he become embroiled in a fight as he stands up for his friends?

Hopefully the Baileys have been able to open the eyes of their neighbours and show them the vile abuse they face everyday.

The ITV soap has had guidance from Baroness Lawrence regarding the racism storyline.