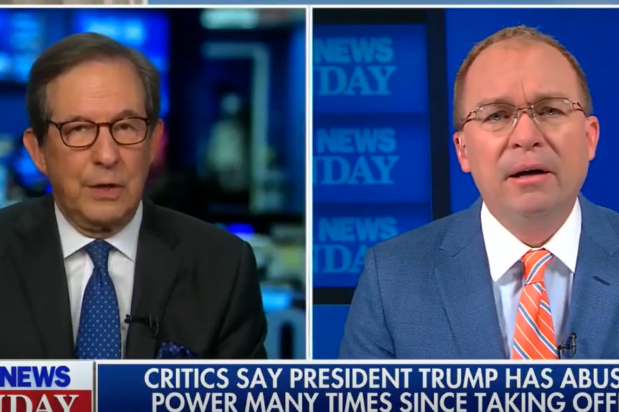 The attack on the U.S. Capitol led Mick Mulvaney to resign from the Trump Administration, but Chris Wallace didn’t let him off the hook during his interview with him on “Fox News Sunday.”

Mulvaney, who was replaced as chief of staff in March 2020, said that six weeks ago, he wrote in an op-ed for The Wall Street Journal that he believed that Trump would leave office “in a presidential manner,” and that he believed it at the time. But he believes that Trump’s behavior has changed since losing the election to Joe Biden.

Wallace pushed back, playing clips from Trump’s first chief of staff John Kelly and noting that he specifically said that Mulvaney and others in the Trump Administration “didn’t have the spine to tell the president no.” Mulvaney responded by defending his tenure as chief of staff.

Wallace again pressed Mulvaney on past behavior by Trump, including his response to the 2017 Charlottesville riots and his administration’s decision to separate immigrants at the border from their children and detain them in inhumane conditions. Mulvaney dismissed this as “policy differences.”

“These are differences of style, the way the president speaks,” he concluded. “Did he misspeak at Charlottesville? Yes. Should he have corrected it? Yes. Did he handle it poorly? Yes. It’s not something people resign over.”

Mulvaney is one of several Trump Administration officials and staffers that have resigned after a mob of the president’s supporters stormed the Capitol on Wednesday during certification of the presidential election results. The attack prompted an evacuation of lawmakers. Five people, including a Capitol police officer, died, with a second officer later dying by suicide. Federal investigators have made multiple arrests in connection to the attack, including one Arkansas man who broke into House Speaker Nancy Pelosi’s office and a West Virginia state legislator who was photographed among the rioters.

In response to the attack, House Democrats announced their intention to file articles of impeachment against Trump for a second time on Monday, though Senate Majority Leader Mitch McConnell says impeachment matters won’t be taken up until Jan. 19, one day prior to the inauguration. In Silicon Valley, multiple tech companies have finally answered calls from Trump critics to clamp down on the president and alt-right media, as Twitter permanently banned the president while Amazon Web Services has announced that it will be removing Parler, the right-wing social media site where the attacks were promoted in advance, from its servers.