With rutting season underway, Carol Kirkwood was hoping to bring BBC Breakfast viewers a glimpse at the beasts live from Bushy Park, London this morning. The area is famous for having deer roam free and Carol was on hand to inform Dan Walker, Louise Minchin and BBC One viewers the dangers the animals can pose as well as praising the spectacle they can also provide. However, as the cameras cut to Carol for one of her weather reports, she was left disappointed viewers had missed the chance to see the creatures, claiming: “It’s live telly.”

Just as the clock had passed 7am, Dan and Louise cut to Carol in Bushy Park as she shared an update on the weather and how her sightings were going.

“Bushy Park in South West London is a deer park,” she informed Dan and Louise. “And it has roughly 320 fallow deer in it over the course of the year.

“We’re in rutting season at the moment, that lasts from October to early November and we’ve been listening to the roar of the stags this morning.”

Carol soon moved on with the weather report but with no sighting of the deer caught on the BBC cameras, she was quick to voice her disappointment. 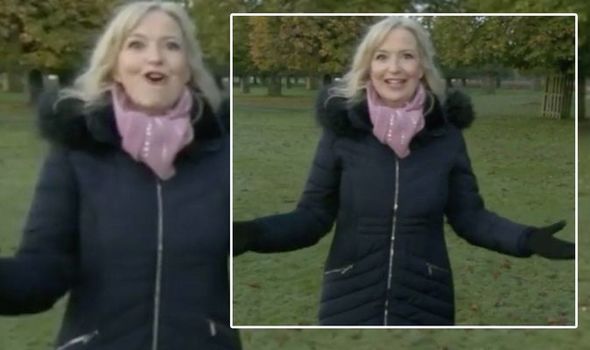 “It’s amazing here, Lou and Dan,” she signed off. “We’ve been listening to the roar of the stag in the last wee while,

“And we’ve seen a few of them crossing the road but, as ever, live telly, as soon the cameras come on, woo, off they go.”