It was only a few days ago that we last saw a documentary on Britney Spears, that being a continuation of the New York Times Presents series coverage of the pop star’s fraught situation. “Confronting Britney Spears” felt hastily brought together in order to cut off this other feature, Netflix’s year-long expose of the pop star’s life, “Britney Vs. Spears.” Directed by Erin Lee Carr, whose previous work has included the “At the Heart of Gold,” about the USA Gymnastics sex assault scandal, “Britney Vs. Spears” attempts to remind of us of who Spears was before the conservatorship that kept her confined, and how our own desire to consume her ended up doing just as much damage.

Right off the bat, if you’re expecting a shocking, lurid expose about Spears’ trauma, it won’t be found here. At 93-minutes, “Britney Vs. Spears” takes its time in getting to where we are today, and instead seeks to show us why Spears was such a success in the first place. Gone is the discussion of pre-teen sexuality and in its place is the story of a girl who loved to sing and, unfortunately, was good enough at it to become one of the biggest pop stars of our generation. There’s a dark undercurrent to every frame of Carr’s feature, reminding us that as much as audiences’ loved Spears, there was a patriarchy that wanted to keep her confined.

The basic tenets of Spears’ nightmare are laid out, but it feels like more care is being taken compared to other articles and documentaries about the case. Spears’ divorce from Kevin Federline is oft-cited as the major turning point for her descent into the conservatorship that she’s been under for 13 years and without saying anything new Carr makes us feel a deep sense of empathy for the singer. Footage of her bonding with her children are shown, contrasted with terrifying moments of Spears’ car surrounded by clicking cameras. A lengthy letter, written by Spears to friend Andrew Gallery, is read, wherein Spears discusses how she didn’t want to get divorced, but her attorneys, for reasons never explained, told her to.

Carr and writer Jenny Eliscu are more interested in examining the relationship between mental health and commerce, if one can ever co-exist, and how Spears sought solace in others. An anonymous source sends the pair a confidential series of medical reports, wherein staff interviewed people close to Spears, including her boyfriends. Immediately, it’s shocking that medical professionals had to vet those spending time with the singer, including her paramours. But what becomes even more disturbing is the reports that attempt to mitigate concerns that Spears can still work, despite having a presumably fragile mental state. When Spears was a judge on the reality show “X-Factor,” the reports mention that Spears is in a delicate mental condition, but the team was begrudgingly willing to allow her to work. 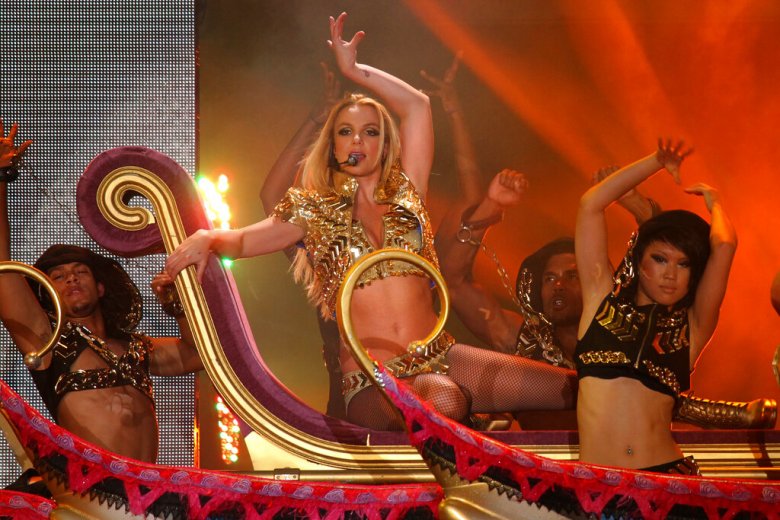 Britney Spears, center, performs on a stage during a concert in Moscow, Russia, Saturday, Sept. 24, 2011. Britney Spears performs in Moscow, St.Petersburg and Kiev as part of her European Femme Fatale Tour. (AP Photo)

Much like Carr’s previous documentaries, “Britney Vs. Spears” is about how a larger system lets down the individual, and Spears was let down. Why were medical doctors even factoring in things like money and work for a woman whose conservator claimed she suffered from dementia? Why were Spears’ medication dosages altered on days that she worked? A key question no one can answer, from the numerous attorneys consulted, to Carr and Eliscu themselves, is who acts in the best interest of Spears when everyone is financially invested in her interests?

If anything can be perceived as shocking in this sad story it’s in who Carr and Eliscu were able to get on the record. Both of the men perceived by Spears’ father, James, as being responsible for her downfall: paparazzo turned boyfriend Adnan Ghalib and Spears’ alleged “Svengali,” Sam Lutfi both talk candidly about their time with the singer.

Ghalib, especially, opens up a new avenue for discussion in how men both shaped and dominated Spears’ life. Back in 2007, many saw Ghalib as little more than a fortune hunter; a man who took Spears’ picture for a living and now how unlimited access to her. And while that could still be the case, hearing him discuss his time with Spears presents him as a man who, if anything, wanted to be there for her. He talks about much of the animosity towards him being directed not just at his job, but for him being non-white and that’s an interesting element that’s never been explored before.

To say the Spears train has been exhausted is an understatement and it’s doubtful any future looks at Spears will be better, short of the singer herself finally telling her story. That being said, Erin Lee Carr’s “Britney Vs. Spears” feels like a movie not searching for scandal but a genuine desire to help, to say something to Spears, to remind us why we love her and how we failed her. It reminds us how a government system has failed her consistently for 13 years. It reminds us of how her family has failed her. In all that failure, Spears has been able to scream and might finally see an end to this. Thankfully, “Britney Vs. Spears” isn’t trying to rehash old material.