In a sneak preview posted by Fox (which you can watch above), Kat (Bialik) invites her coworker to “Come meet the stars of my favorite TV show when I was growing up,” before introducing Lawrence,Von Oÿ and Stroyanov.

Lawrence then places one of Blossom’s signature hats – a brimmed straw hat with a large sunflower – on Kat’s head.

Later in the clip, Kat poses for a picture with the trio and makes sure to stand next to Lawrence. “I’m gonna get cropped right out of this thing,” saysStroyanov.

“Blossom” ran for five seasons on NBC, from 1990 to 1995. The Emmy-nominated sitcom starred Bialik as Blossom Russo, a teen living with her father (Ted Wass) and older brothers Joey (Lawrence) and Michael (Stroyanov). Her fast-talking best friend, Six Dorothy Lemeure, was played by Von Oÿ, while her mother Maddy was played by Melissa Manchester. 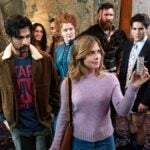 Fox sitcom “Call Me Kat” stars Bialik as a woman who uses all of her savings to open a cat café in her mission to find fulfillment and happiness. Leslie Jordan, Swoosie Kurtz, Cheyenne Jackson, Kyla Pratt and Julian Gant also star.

Two weeks ago, the show’s Instagram teased the announcement with a snap of the sunflower hat resting on a countertop. “Happy #NationalCatDay, everyone!,” read the caption. We may be deep into fall, but Season 2 of ‘Call Me Kat’ is blossoming. We can’t wait for you to see what’s in store!”