If nothing else, at least Big Brother producers will have a lot of footage from the live feeds to put together the Thursday night episode. Whether it will actually change anything is a different question.

As the Wednesday night episode showed, Head of Household Cody Calafiore won the Power of Veto. He elected to keep Christmas Abbott and Tyler Crispen as his two nominees for eviction this week.

During the October 8 Eviction Ceremony, Nicole Franzel, Enzo Palumbo, and Memphis Garrett will now decide whether it is Christmas or Tyler going to the BB22 jury. And for a while, it seemed like the house was officially set on one eviction target.

After the Power of Veto was decided last weekend, Tyler became the primary target for eviction. Everyone (other than Tyler) was on board with the choice and Cody was pushing for them to make sure it was a unanimous vote. Tyler was doomed.

On the Big Brother live feeds, it even got to the point where Nicole was calling Tyler a “snake” and ranting about him to anyone who would listen. Janelle Pierzina heard Nicole’s rantings and took to Twitter to call Nicole jealous.

Could Nicole save Tyler or is it all an act?

Late Wednesday, Nicole suddenly began pushing the idea that they were making the wrong choice by keeping Christmas in the house. Nicole was trying to hammer home her point that Memphis and Christmas would be a strong duo to deal with if Tyler got evicted.

At each turn, Cody tried to keep her from spinning, but Nicole had convinced herself that keeping Christmas was a bad idea. These conversations definitely gave show producers a lot of footage to advertise a possible vote flip when host Julie Chen Moonves takes the stage again on Thursday night.

As of the publishing of this article, Nicole has not found any success in flipping the vote, even though all it would take would be for Enzo to get on board with her. And Tyler is separately trying to sell Enzo on it as well – without knowing what Nicole is trying to do.

Nicole crying a lot on the feeds again

When Enzo and Cody talked Nicole out of flipping the vote, she didn’t get mad about it, but she did start crying and saying that she felt bad about having to vote Tyler out this week. 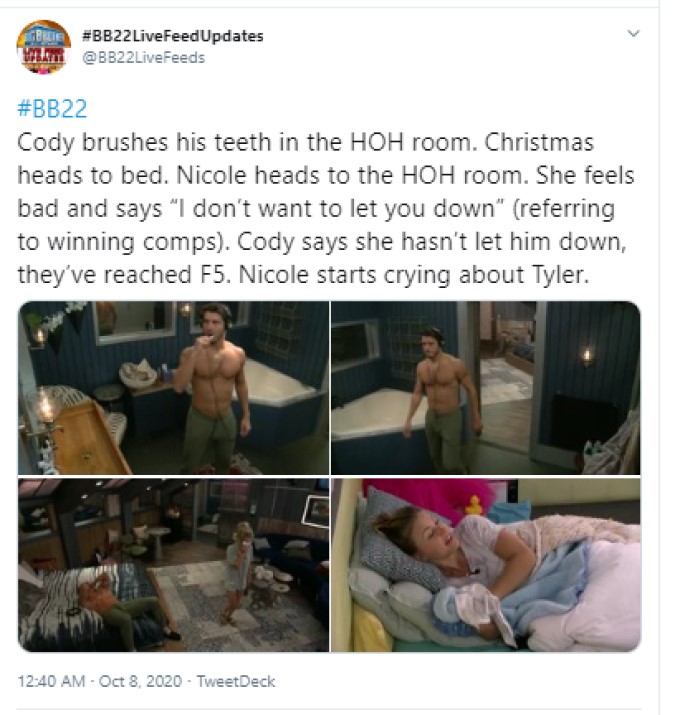 It’s extremely unclear what would motivate her to feel bad about it. It seems very similar to when she became one of the reasons that Ian Terry got evicted and she only started feeling bad about it later. Many fans thought that she was playing it up for the camera then, and she may be doing it again with Tyler.

For a week, the narrative has been that Nicole despised Tyler, that she couldn’t stop talking about him, and that she was ready to leave a mean goodbye message to him that she claimed would ensure he never voted for her to win. It makes the sudden change of heart pretty suspect, but at least it made the Big Brother live feeds interesting for a while.

Will the vote flip? Probably not. But if we hear anything definite in that regard, we will make sure to pass on those Big Brother 2020 spoilers as well.

For now, we still expect Tyler to unanimously get evicted. Will he blow up people’s games in the same way that Daniele Donato tried to do during her eviction? We’ll all find out together very soon.