The former F1 star joined Ben Shephard and Kate Garraway virtually from Ibiza where he first excused Nelson Piquet’s racist slur with Lewis Hamilton before talking about the Russia/Ukraine war.

‘He’s a first-class person,’ the 91-year-old businessman continued. ‘What he’s doing is something he believed is the right thing he was doing for Russia. Unfortunately, he’s like a lot of business people, like me, we make mistakes from time to time.’

Bernie then turned his attention to Ukraine president Volodymyr Zelenskyy.

‘I think if he’d thought about things, he would have made a big enough effort to speak to Mr Putin, who is a sensible person and would have listened to him and probably would have done something about it,’ he continued. 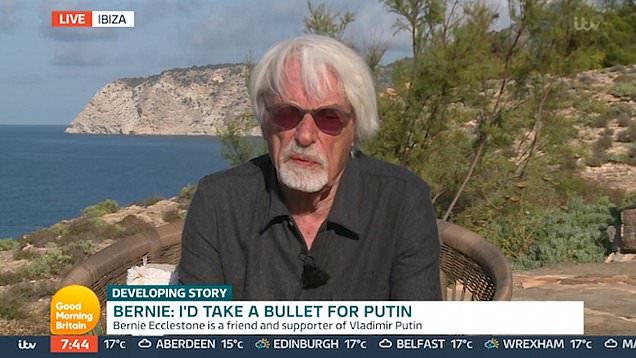 At this point, a shocked Ben quickly interrupted to remind Bernie that Putin started the war in Ukraine which has led to the deaths of thousands of innocent people.

‘You can’t justify that, surely?’ he asked.

‘It wasn’t intentional,’ Bernie replied. ‘Look at the number of times America has moved into different countries that has nothing to do with America… they like wars because they sell a lot of armour so it’s good for them.’

Earlier this year, he came out to the president’s defence during an interview on Times Radio.

‘As a person I found him [Putin] very straightforward and honourable,’ he shared. ‘He did exactly what he said he was going to do without any arguments.’

According to reports, Bernie and Putin’s friendship blossomed after the pair were introduced at the Russian Grand Prix in 2014.

In 2019, Putin told The Times that he’d like to see Putin ‘running Europe’.

‘I would like him running Europe. We haven’t got anybody, so it couldn’t be any worse.’