Home » TV & Movies » Below Deck Med: Captain Sandy Yawn and Malia White blasted for reunion behavior, fans are over them

Below Deck Mediterranean stars Captain Sandy Yawn and Malia White are being blasted for their reunion behavior. Fans are over the bosun and captain, declaring them both snakes on social media.

Part one of The Wellington crew’s virtual chat was pretty much what views expected. It was more of the same with Captain Sandy and Malia.

They failed miserably to justify their actions of season. Twitter exploded with fans expressing their disgust over the way Malia and the captain handled themselves.

Then again, is anyone really surprised those two didn’t take any responsibility for their behavior?

Social media called out Captain Sandy for her favoritism towards Malia, Bugsy Drake, and Tom Checketts. The captain shared Kiko should have kept his emotions in check while in the galley.

However, in the next sentence, she praised Tom, who, as viewers saw, had a meltdown every single episode, for his professionalism. It is no surprise, though. Captain Sandy also let Malia run wild with her emotions, like with the cabin assignments.

Let us also not forget that Captain Sandy told Hannah to deal with disgruntled second stew Lara Flumiani, who put her hands on Hannah. However, she gave a lecture to the deck team after Malia whined that Peter Hunziker kept calling her “sweetie” and “sweetheart.”

Malia smirking through the entire reunion also proved she knows she is a favorite. The bosun did address her laughing on social media, but fans thought her explanation was more BS.

Captain Sandy and Malia are not trailblazers

Season 5 was the first that featured women in all the leadership positions. It was supposed to be an empowerment season for women.

Instead, fans watched Captain Sandy and Malia play mean girls. They have referred to themselves as trailblazers, but Twitter disagrees.

Fans think the disastrous duo cut women down instead of building them up. Malia and Captain Sandy give women in power positions a lousy name for sure. 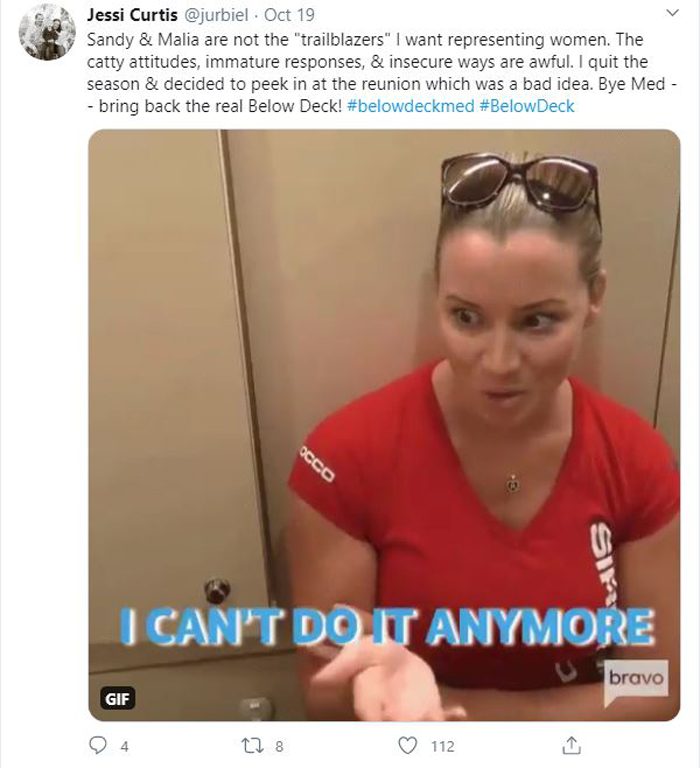 There is speculation the bosun and captain are filming Below Deck Mediterranean Season 6. If the news proves true, viewers are threatening to drop the show.

Then again, people tune into reality television for the drama, and the two women certainly bring out fans’ anger.

The Below Deck Med Season 5 reunion has not changed fan opinion of Malia White or Captain Sandy Yawn. Bravo has promised some OMG moments during the second part of the virtual chat.

The preview clip features host Andy Cohen banging his head on the table and trying to speak over all the yelling.