Jules Verne’s 1872 novel Around the World in 80 Days has had no shortage of screen adaptations. That includes the Oscar-winning 1956 film starring David Niven and the more recent 2004 movie starring Steve Coogan and Jackie Chan. Now, PBS has unveiled a new version of the story, with Dr. Who‘s David Tennant stepping into the role of Victorian adventurer Phileas Fogg.

[Warning: This article contains spoilers for Around the World in 80 Days Episode 1.]

The set-up of Around the World in 80 Days is simple. Wealthy Englishman Fogg bets an acquaintance that he can circumnavigate the globe in 80 days or less. He embarks on his journey with his French valet Passepartout. They visit India, Hong Kong, and the U.S. on their way back to Fogg’s home in London.

The new series follows the same basic premise. In the frantic, action-packed premiere (the first of eight episodes), we meet Fogg, an unassuming middle-aged bachelor. He’s so predictable and unadventurous that the other men at his posh club can order his bland, boring lunch for him. But after his longtime nemesis Nyle Bellamy (Peter Sullivan) mocks his dull ways, Fogg makes an unexpected announcement. Inspired by a newspaper article he just read about how it’s now possible to travel around the world in 80 days, he decides to attempt the journey himself. Never mind that he’s barely ever left London. He also bets Bellamy a staggering 20,000 pounds – about $3 million in today’s U.S. currency – he can complete the trip.

Verne published his novel when the British Empire was nearing the height of its size and power. The book has an undeniably colonialist viewpoint and focused largely on white, male characters. The new series attempts to make the story more palatable and relatable for modern audiences by diversifying the cast. (How the show handles things when Fogg arrives in places such as Hong Kong and India, which were then British colonies, remains to be seen.)

Black French actor Ibrahim Koma plays Passepartout. He learns of Fogg’s planned adventure while working as a waiter at the Reform Club. The Frenchman finagles his way into a job as Fogg’s valet, which gets him out of a sticky situation in London. He also has a complicated past that we learn a bit more about in this episode. (More on that in a bit.)

Meanwhile, Babylon Berlin alum Leonie Benesch plays a new character, Abigail Fortescue. She is clearly inspired by real-life journalist Nellie Bly, who made her own round-the-world journey in 1889. Abigail is the daughter of a powerful newspaper editor and a journalist struggling to make a name for herself. (Her father insists on publishing her articles under a male pseudonym.) She writes the article that inspires Fogg and tags along on his journey, now using the name Abigail Fix. 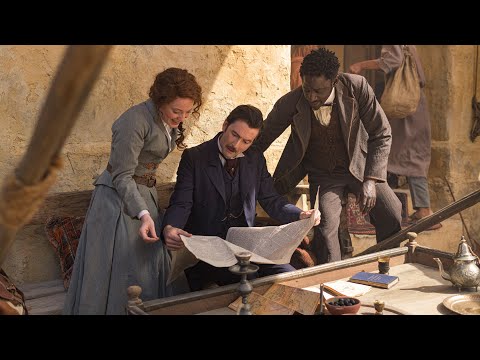 To say Fogg is woefully unprepared for his epic journey would be an understatement. He gets seasick on the ferry from England to France, miserably declaring that he’s “dying.” Things get worse when he and his companions arrive in Paris, which is in the midst of a vaguely explained popular uprising. He quickly gets separated from Abigail and Passepartout, leaving him to bumble around the streets of the French capital.

Meanwhile, Passepartout reconnects with his brother, a key player in the revolt. There’s some hasty backstory about the siblings’ tense relationship and their father’s past as a revolutionary, with Abigail tagging along in search of a good story. Here, the episode awkwardly shifts between mostly comedic scenes of Fogg attempting to reconnect with his friends and more serious moments as Passepartout’s brother plots to assassinate the French president.

The action heats up at the end of the episode when Fogg inadvertently foils the assassination attempt. Soon after, Passepartout’s brother is shot to death in a dramatic scene. But the moment lacks emotional impact given that we barely knew the character and the details of his realtionship with his brother.

Phileas, Passepartout, and Abigail make their escape from Paris in a hot-air balloon, on the way to their next adventure. Meanwhile, there are more hints about what caused Fogg’s retreat from the world. He carries a flask engraved with the words, “To my darling fellow traveler, always yours.” And then there are those mysterious postcards he’s been receiving, including one with a brief but pointed message: “Coward.” Clearly, there’s more to this mild-mannered man than meets the eye.

So, what’s in store for Fogg and his friends on the next stage of their journey? Find out when Around the World in 80 Days Episode 2 airs Jan. 9 on PBS.