In the most recent episode of Antiques Roadshow, the team of experts had visited the spectacular Culzean Castle in Ayrshire and had invited a select few members of the public to join them with their treasures and attic finds. It was the turn of Charlotte Riordan to cast her expert eye over a gorgeously vibrant watercolour painting of a pheasant which’s origin was a mere stone’s throw away from where she was standing. After speaking to the owner of the item about how she came to possess the artwork, she moved onto how much it would be worth should she auction it off. But the lady made it very clear; she would be doing no such thing.

“So we have a lovely watercolour her which I believe has a connection to this fantastic castle behind me!” Charlotte remarked.

“Yes, this watercolour was left to me by my mother after she died, about three years ago,” the lady explained.

“And I found the inscription on the back ad then delved into the history of my grandmother who it turns out was the great, great, probably great-granddaughter of the Great Kennedy that last lived here.”

“You’ve come on a pilgrimage today to visit your ancestral home,” Charlotte continued.“What started you off on this research is this very interesting inscription on the back: ‘Painted for me by Archibald Thorburn on the occasion of my marriage, 10th March 1923,’ which we have a lovely image of here.” 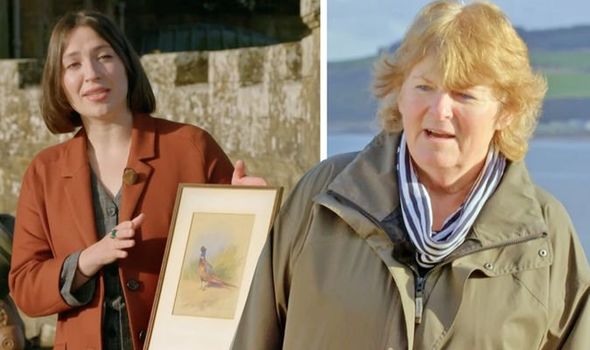 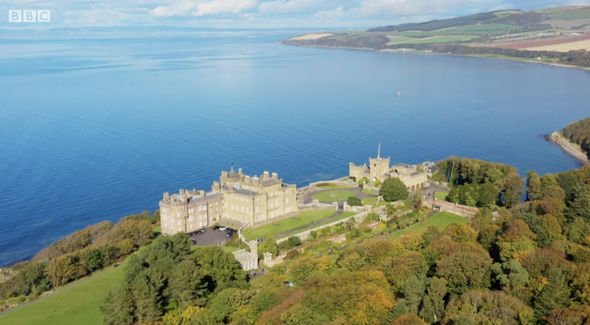 The owner commented: “And it turns out that Thorburn was a friend and neighbour of my grandmother when they lived at Hascombe Court in Surrey.”

“That’s right, yes, because he was actually a Scottish-born artist, which is why it’s so nice to see it up here in Culzean today,” the expert revealed. “[He was] born in Midlothian, spent a lot of his life down there in Surrey.

“He’s regarded as one of the finest watercolourists of his period and probably one of Britain’s best painters of birds so I recognised it straight away.

“He’s very technically skilled in his handling of watercolour,” she added. 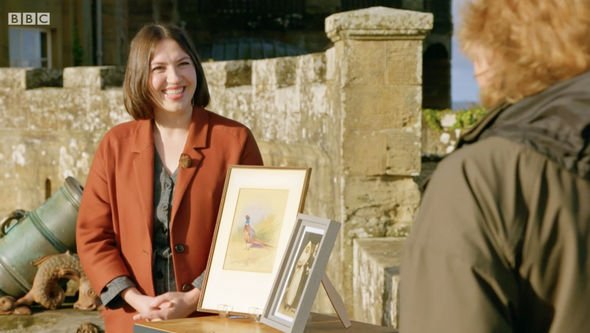 Charlotte then took a closer look at what the painting was of and said: “This is one of his favoured subjects, for collectors, a game bird, in this case, a pheasant.”

In fact, the Scottish artist specialised in creating portraits of a variety of wildlife and regularly visited Scotland to sketch the animals in their natural habitats.

His favourite haunt was apparently the Forest of Gaick near Kingussie in Inverness.

Despite the painting being nearly 100 years old, the richness of each colour was still alive. 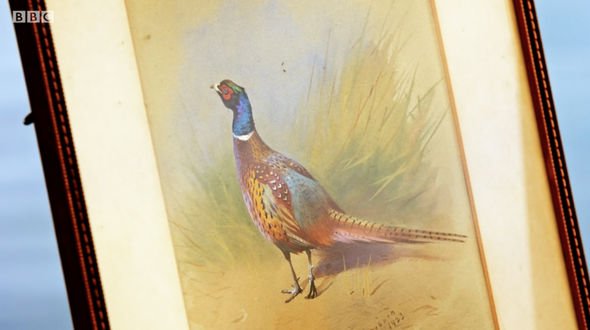 And as for the price of such item in today’s market? The expert continued; “In terms of value at auction, this would be worth around £4,000 to £6,000 in its current condition.”

“Well, that’s lovely, very nice. Though it won’t be going anywhere, it’ll be staying in the family,” the owner stated firmly.

Elsewhere on the show, Fiona Bruce took part in another round of Guess the Mystery Object where she was given a series of clues to try and identify what the items were before putting a price on them.

“Now Lisa, you’ve brought along three things which are totally mysterious to me I have to confess and you’re going to give us a couple of options for each and together we’ve got to try and work out what on earth these things are!” The presenter commented. 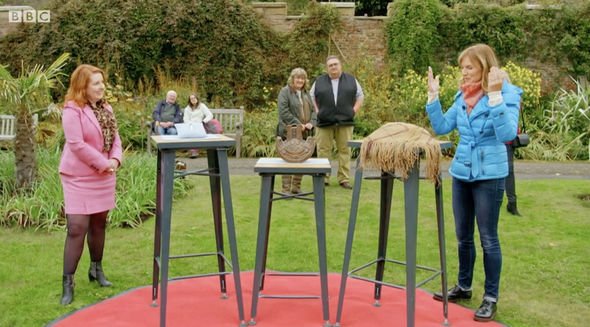 “There’s a pair of those, they are woven hemp and they a ritual of ceremonial aprons for a tribe in Papua New Guinea,” the expert revealed. “Alternatively, they are visors – again woven out of hemp – and they are the sort of thing which would’ve been put over the head of cattle to keep away the flies.”

Confused, Fiona moved on: “And what’s this wooden contraption?”

“That is a ceremonial stirrup from South America,” Lisa added.

“A poor horse would have that dangling down by its sides?” Fiona asked and Lisa replied: “Well it may have only been used for ceremonial occasions but they are quite heavy.

“And what about this teeny tiny little silver thing over there?” Fiona said referencing the third and final object.

“That’s silver, it’s the holder for part of a tracheotomy kit and that’s just the vessel that would’ve held the pice that punctures the throat,” Lisa explained.

“But why would a surgeon have it in silver?” The presenter asked.

“A lot of surgeons’ utensils were made out of silver,” the expert remarked. “Alternatively it’s for holding a single flower and perhaps it would’ve stood in a little stand.”

“They all seem completely bonkers to me!” Fiona laughed.

The objects were then revealed as a face covering for cattle, a stirrup and a flower holder.

Antiques Roadshow airs every Sunday night on BBC One at 8pm.