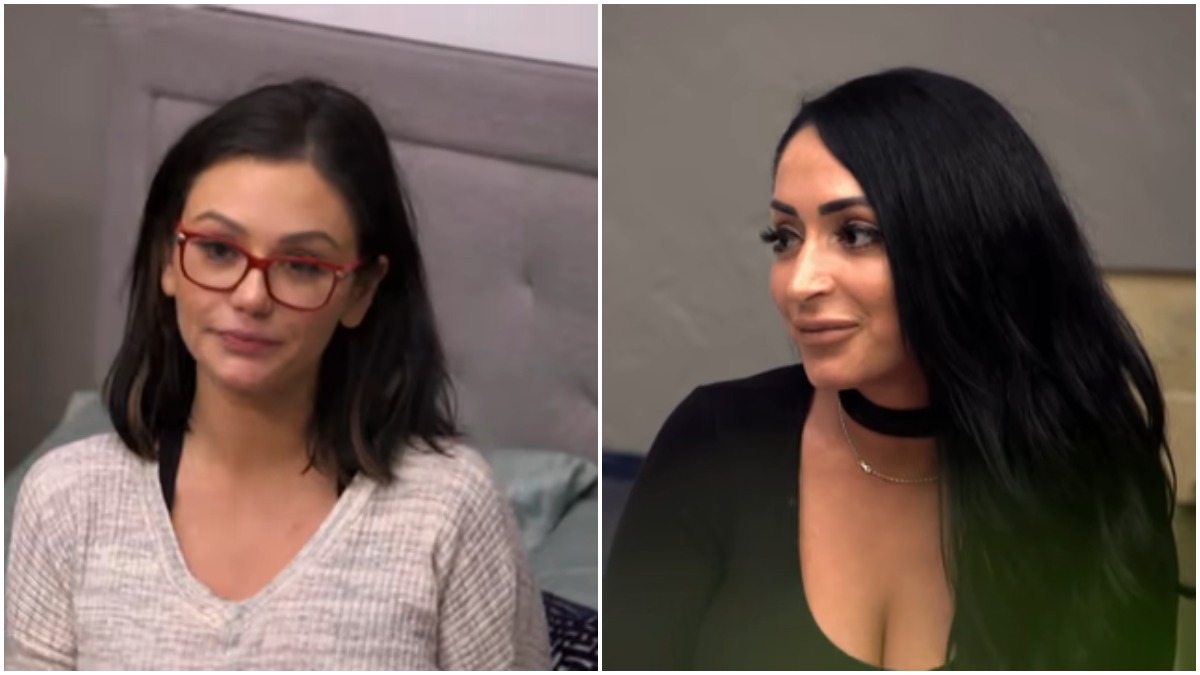 During the new season of Jersey Shore Family Vacation, Angelina Pivarnick called out Jenni “JWOWW” Farley for stiffing her on a wedding gift.

At the beginning of the episode in question, Angelina recapped the wedding drama with her husband Chris Larangeira as they went through their gifts two days after the event.

Angelina said, “My mother says it was a fairytale wedding with a price to pay and I agree.”

“Now when you have three girls that I call my friends say this wedding speech and right off the bat they say, ‘you had three engagements and you finally had one that stuck’… you kinda just ruined the night for me,” she continued

Chris recalled how they both laughed in the moment, but when he looked out into the crowd of guests and saw his mother and grandmother, he was embarrassed.

Angelina said to him, “I was more hurt at that point, I’m still hurt… I’m really hurt right now.”

During a confessional interview, Angelina continued to discuss the disappointment she felt and said, “You know what, you can say you were drunk all you want but you’re still an adult at the end of the day. Even if it’s a joke between us, I don’t think it should have been said in front people that don’t know those jokes.”

She then slighted Jenni for not giving her a gift and said, “Honestly I thought it was a little f**ked up. Not to mention Jenni didn’t even give us a gift…maybe that was Jenni’s gift, the wedding speech.  But that is some gift let me tell you!”

Shortly after the wedding, and prior to the episode airing, someone leaked audio from the wedding and the girls’ speech went viral on social media.

Vinny said in a confessional interview, “It’s been a few days since the wedding at this point and I’m still in shock at how sideways this wedding went.”

“Drama escalated because audio leaked of the girls giving their speech so the whole world thinks that the girls just ruined Angelina’s wedding on purpose and it makes this issue grow into so much more than it originally started as,” he explained.

Deena and Jenni discussed the social media backlash they received and the impact it had on them.

Deena said to Jenni, “This has been the most stressful thing.”

Jenni agreed and said, “I’ve never experienced what we’re experiencing right now on social media. As bad as the wedding was, today it’s so much worse because there is now leaked audio and social media is the devil.”

The girls detailed the comments they received from critics. Jenni said she received thousands and thousands of messages about being a bully.

She said, “They’re attacking my parenting, the type of karma I deserve, like literally I should die and get kicked on and spit on.”

Jenni also said fans were going after her children and one said, “I hope your daughter experiences what Angelina went through”

Deena experienced similar messages and said, “People are telling me my son deserves to be bullied, if people saw me out they would punch me in the face.  People are literally coming after me as a mother…like how could you do that? I just want to go into a little friggin hole and cry.”

Following the wedding backlash and leading up to the new season of Family Vacation, the girls hadn’t talked to Angelina in nine months.

With the Jersey Shore roommates coming back together during quarantine, the boys hope they’ll be able to mend the relationship between the girls so they can move on as a happy family.

Only time will tell if bringing the Shore cast back together will fix their friendships or push them further apart.