I came to discover the talent of actress and director Adrienne Shelly in a weird place: the 1991 movie “Big Girls Don’t Cry, They Get Even.” Is it the best movie? No, but as a child I remember being struck by the beauty and empathy of Shelly’s performance. It’s something I continue to notice whenever I revisit the movie, which I maintain is actually very darling. The next time I heard Shelly’s name it was the announcement of her tragic murder at the age of 40, and like the death of Heath Ledger I always remembered where I was. Ironically, I saw “Waitress” soon after and was again reminded of what we lost.

Maybe because her death was so heinous, so senseless, but the people who remember Shelly’s name and work remain affected by it. So almost immediately you should expect an emotional rollercoaster going into HBO’s latest documentary on the director, “Adrienne.” Directed by Shelly’s husband Andy Ostroy, the documentary’s primary focus is on her life, her relationship to art, and her family. Starting with her breakout role in Hal Hartley’s “The Unbelievable Truth” and ending with her directorial work with “Waitress,” it’s a fantastic exploration of a woman, director, mother, and creative.

Ostroy is not a director by trade, making this his feature film debut, and thus he positions the camera on others more often than himself. The usual suspects of a documentary of this stripe are included, from Shelly’s friends, her mother, and her child. But what’s immediately evident is the love for this woman that everyone, 15 years later, still feels so acutely. The audience walks away from the movie certainly understanding who Shelly was as a person — both infinitely sexy and an old soul.

Shelly always worried about dying young, and in fact it’s a shock to hear how she died at age 40 just like her father did. This often happens in documentary, hearing about a person who almost seemed to know they were doomed. But in Shelly’s case, these moments hang in the air. They aren’t connected to her demise, more indicative of her desire to become a creator quickly. As she started to find success in the indie world, it came with her losing a bit of control over her image. The movie doesn’t belabor the point, but there is mention of how Miramax initially wanted “The Unbelievable Truth” recut to include nudity from Shelly. The decision to become a director was always in Shelly’s mind, starting with her time at college, but the struggles of being a woman in the driver’s seat left the director feeling things were taking way too long to develop. 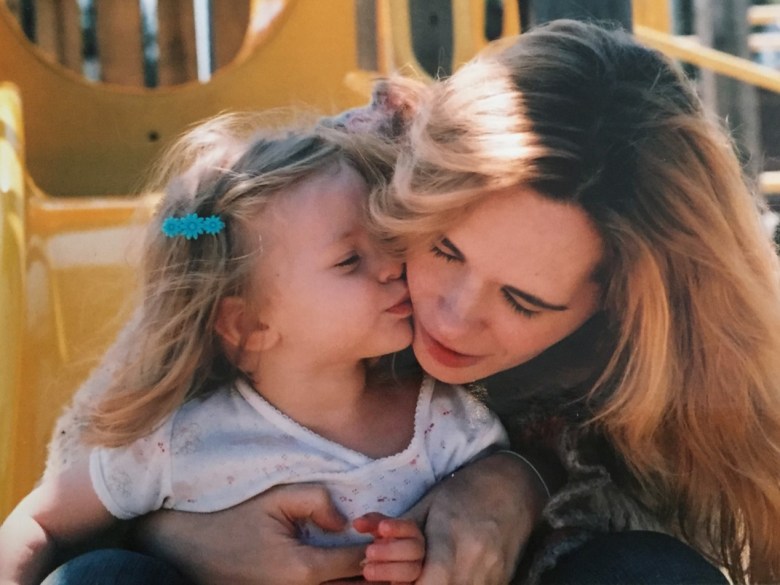 It’s wonderful how much footage of Shelly is included, truly making her feel like a living figure within the narrative (and only making her loss feel even more poignant). Shelly documented her own life within that of her films, particularly toward the end of her life as she was working on a story about finding happiness. It’s apparent that Shelly was a creative who also endured the same issues we all have, namely hoping that she wouldn’t become consumed by her work. As her friends reveal to Ostroy, many of them assumed he and Shelly met during a fundraiser or something else related to 9/11, only to discover that Shelly was embarrassed to admit they’d met on Match.com.

This balance between director and family comes through clearest in Shelly’s greatest work, her daughter Sophie. Footage of mother and daughter bonding is enough to break one’s heart, but to hear the quiet intimate moments between father and a now 14-year-old daughter emphasizes the gravity of the loss of Shelly to them. Sophie discusses how she hasn’t cried about her mother’s death, with her father wondering if that’s healthy for her.

The decision to read passages Ostroy documented of Sophie bringing up her mother from the age of 2 to the age of 10 is interesting. Told in animated segments, young Sophie tries to process death and her mother’s murder. But the decision to have Ostroy and his daughter read these passages is a bit off-putting as the readings are dispassionate. It might have been better to let actors create some distance in these moments. There’s also Ostroy’s potentially controversial decision to film his meeting with Diego Pillco, the man convicted of killing Shelly. The conversation is brief and comes closer to the end of the film. It’s less a pointed moment to shame a murderer and more to focus on Ostroy’s own desire for closure. To tell this man about what he, Ostroy, lost that day.

“Adrienne” is a beautiful testament to the power of Adrienne Shelly and will hopefully inspire fans, new and old, to revisit her work. Andy Ostroy’s documentary certainly emphasizes the emotional and sentimental, but that intimacy bonds the audience to Shelly as a woman. Bring tissues.

“Adrienne” airs on HBO and streams on HBO Max December 1.