It seems a newborn isn’t the only thing Halsey fans can expect her to deliver soon. The “Now or Never” hitmaker has been teasing fans and they think they’ve figured out what’s to come.

The New Jersey-born star first rose to fame after releasing her debut album, “Badlands,” in 2015. Two years later, her sophomore LP, “hopeless fountain kingdom,” gave Halsey her first chart-topping album on the U.S. Billboard 200 while her 2020 follow-up, “Manic,” cemented her status as one of music’s biggest stars of today, peaking at No. 2.

Halsey’s back catalog of hits includes “Without Me,” “Bad At Love,” and “Closer,” to name a few. Over the years, the Grammy Award-nominated singer has collaborated with a bunch of huge names — The Chainsmokers, Big Sean, Marshmello, and Khalid — and had her fair share of high-profile relationships. In January 2021, Halsey announced she and her boyfriend, writer and producer Alev Aydin, were expecting their first child. As seen in an Instagram post shared on June 5, she looks pretty far along. Even though Halsey hasn’t revealed when she is due, it seems she might be giving birth in the upcoming weeks.

With that being said, Halsey’s fans believe a baby isn’t the only thing she will be releasing into the world. Keep reading to find out more. 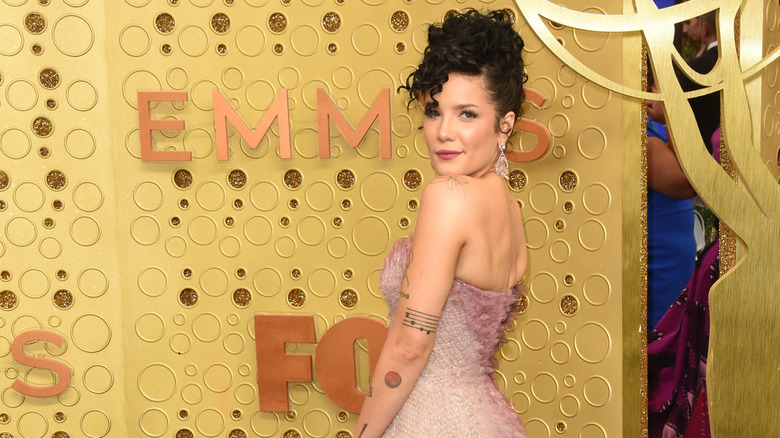 Since 2015, Halsey has released three studio albums. Her most recent, “Manic,” dropped in January of 2020. While her latest record didn’t come out too long ago, it seems the singer is getting ready to release another. Even though the “You Should Be Sad” hitmaker has been tight-lipped about new music, she has been sending mysterious postcards to fans that have “H4” written on them, which hints at a fourth album, per Twitter.

Unsurprisingly, Halsey sent her fans into a mini-meltdown on social media. “Halsey… aren’t u about to release a BABY how did u have time for an ALBUM ???” one user wrote. “HALSEY WHAT THE F**K MAAM ARENT YOU SUPPOSED TO BE RELEASING A BABY SOON AND HERE YOU ARE TEASING AN ALBUM???” another person shared passionately in capital letters. “Just a heads up that I will probably lose my mind when the new Halsey album drops,” remarked a third fan.

No news on whether a single is coming before the album, or if Halsey plans on dropping the whole project as a surprise. All we know is, we’re ready and can’t wait!