It’s no secret that Sam Asghari has been a huge supporter of his girlfriend, Britney Spears, over the years. Aside from the fact that he’s been in attendance at her various shows, he’s also been a rock for her to lean on during this challenging time in her life. Back in June, a source told Page Six that Asghari “has been a huge support for Britney,” and “he helps boost her confidence and assures her that everything will go well.” Although the two have been together since 2016, Asghari has only recently started speaking out about what’s going on in Spears’ life behind-the-scenes, though he doesn’t really speak openly about the court proceedings or about what he has personally witnessed when it comes to Spears’ conservatorship.

Following Spears’ virtual court appearance on July 14, Asghari took to Instagram to share a photo of a lioness. Although he didn’t caption the pic, fans know that Asghari calls Spears his “lioness,” and that he was posting to celebrate Spears’ victory; according to NBC News, the judge overseeing the case granted the pop star the right to hire her own attorney. Previously, Spears has been forced to work with court-appointed lawyers. Asghari’s Instagram share wasn’t the only thing that he did following the conservatorship hearing, either. Keep reading to find out what Asghari posted, and how he really feels about the Free Britney movement.

Britney Spears and Sam Asghari are both ready to 'Free Britney' 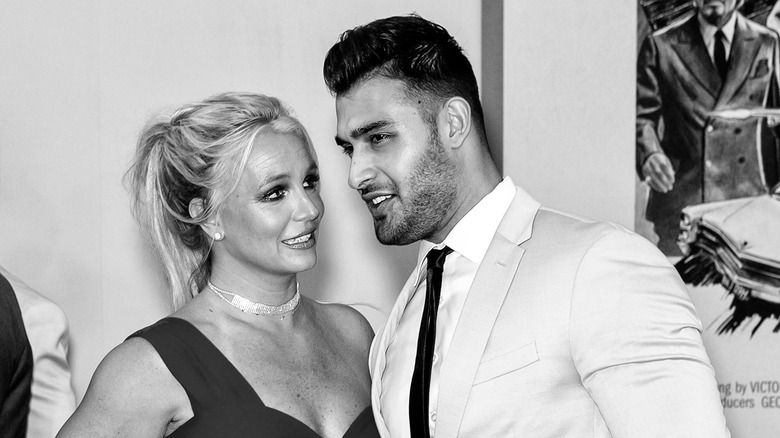 Sam Asghari has actually been following the Free Britney movement, according to Page Six. A source told the outlet that the model/actor “has been following the #FreeBritney movement online for a while now and always tells Britney how much she’s loved and supported by fans.” He seemed to prove that on July 14, when he commented on Britney Spears’ first Instagram post after the hearing ended. Spears uploaded a video of herself doing flips and riding a horse, and added a very telling caption. “This is me celebrating by horseback riding and doing cartwheels today,” she wrote, also taking some time to thank her fans for their support. At the end of the caption, Spears used the hashtag “#FreeBritney” for the first time — ever.

Spears’ boyfriend didn’t skip a beat. Showing his full support, he commented on the Instagram photo, “internet is about to explode,” and he added the #FreeBritney hashtag. More than 100,000 people liked Asghari’s comment, showing their approval. It seems clear that both Spears and Asghari are on the same page when it comes to this conservatorship battle.