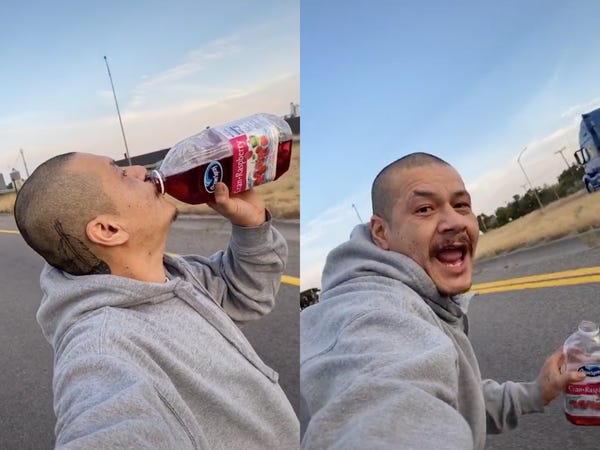 Over the course of quarantine, there's been an online tendency to gravitate towards wholesome, relaxing, and empathetic content. From videos like the explosive "Meatier/Meteor" TikTok skit about the end of the dinosaurs to a viral video of two violinists recreating "Titanic's" sinking ship scene in a toilet paper aisle in March, people have latched onto content that makes them feel good.

Perhaps nothing has hit that target more than a viral longboarding video from 37-year-old Nathan Apodaca, better known online by his handle @420doggface208.

In the video, Apodaca skates down the curve of a highway, holding his phone in one hand and a jug of Ocean Spray Cran-Raspberry juice in the other. He lip syncs along to Fleetwood Mac's 1977 "Dreams," takes sips of his juice, and crouches down on his board as Stevie Nicks croons.

As one viral Twitter repost describes it, Apodaca's video is a "whole vibe. simple as that." It's attracted attention from Ocean Spray, which gifted Apodaca with a new truck, as well as Mick Fleetwood, drummer of Fleetwood Mac, who created a TikTok account to recreate the video.

Apodaca told Insider that rumors of a Travis Scott collaboration had been "[blown] out of proportion" after someone asked what he would do if Travis Scott reached out. "But that would be awesome, to do a promo for someone like that," he said.

Apodaca filmed the iconic video on his way to work at a potato warehouse (from which, as he told the Post Register, he's taking a leave to manage his viral fame) one morning in Idaho. After his car shorted out, he didn't want to wait to get it jumped, so he decided to "take off on [his] board," Cran-Raspberry juice in tow. He also said that he needed to put out a video to keep his following, which he told Insider was around 720,000 people who he calls "souljahz," entertained.

"I was like, 'okay, this is perfect because I can just coast all the way down. I can get a smooth video, won't have to set up the video, put my juice down and come back later,'" he said.

Apodaca shot the video in one take, deciding not to walk back up the hill to re-film it. When he arrived at work, he contemplated posting it — "I wasn't going as fast as I wanted to go," he said — but that the video's vibe was "steady." Deciding that he could just take down the video if it didn't perform well, he posted it.

Now, two weeks after he originally posted it, the video has approximately 35.5 million views and 6.3 million likes on TikTok alone.

The Fleetwood Mac sound is a definite part of the video's draw, and Billboard reported that "Dreams" saw its biggest streaming week ever after the video blew up online.

"Growing up my mom, my dad, my uncles, my aunties, you know, everybody was always Fleetwood Mac, Hall & Oates, Marvin Gaye, Al Green growing up," Apodaca told Insider, saying that he doesn't have a favorite genre of music and listens to everything from reggae to country. "It was just them who brought me up with music from the olden days."

Apodaca told Insider that he had a significant following on social media even before his video went mega-viral. Known for his dance videos and impeccable vibes, his videos regularly amassed thousands of views and likes on the platform.

Per an interview with The LA Times, @420doggface208 is actually his second TikTok account — the first, @doggface208, was banned in 2019 after Apodaca posted a video promoting his merchandise. The first time he went viral, it was for a video of him doing the infamous "Git Up" dance challenge.

Apodaca told Insider that his merch sales have exploded since the video went viral. Previously he embroidered beanies by hand, which he says only brought in around $1000. Apodaca said that he's not hand-making the beanies in his store at the moment due to demand. Now, his merch store features hoodies and shirts emblazoned with his handle and the instantly-recognizable image of him drinking from his jug of cranberry juice on the highway.

That doesn't mean that the days of his custom merch are over. "I'm still here with a whole stack of beanies right now," he told Insider. "So I'm going to do my little own special edition of, you know, one run of the last of what I have."

Apodaca acknowledges that his vibes contributed to the energy of his viral video, saying, "I'm chill, you know what I mean?

"I don't like conflict… anything can be resolved with a simple conversation. And if it can't then let it be and you go your way, I'll go my way, you know? Two tears in a bucket," he said.

That kind of energy is something that feels deeply comforting in the midst of the madness of an election season taking place during global pandemic. The LA Times' Mikael Wood called Apodaca's video the "viral antidote to Trump's chaos."

On a personal level, Apodaca said that the video's success and a wave of donations have helped him to be more "comfortable" financially, allowing for him to pay his phone bill on time and make a down payment for a house.

"It's just been a little bit better, you know what I mean?" he told Insider. "Just still smiles always, no matter what, but just a little bit more comfortable."

It doesn't seem like his viral fame is going to be fading much any time soon. Apodaca now has approximately 2.8 million followers on TikTok, and said that he's getting into Instagram Reels. While he said that it's harder to comment and interact with his audience now than it was before, he still tries to like as many comments as he can.

Apodaca told Insider that his content on social media isn't going to change. "I just do me, that ain't gonna change," he said. "I'm gonna keep skateboarding and doing my longboard videos because those make me feel good. My little dance videos, my little skits that I do, it's just exciting to me. It's fun and exciting because I get to see the joy that it brings people."