Home » Music » The street where everyone is at home

"No one is bigger than Sesame Street," according to Joe Fiedler, who has been composing and arranging music for the iconic kids' TV show for the past 10 years.

It's hard not to agree when you consider the star-studded list of names who have performed on the program – everyone from Stevie Wonder to Norah Jones, Queen Latifah to Elvis Costello. 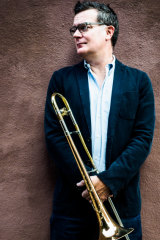 Joe Fiedler has written thousands of the cues that make up the unique soundscape of Sesame Street.

"Everyone has grown up with it, so people are willing to do anything and humble themselves.

"These huge stars come and you think, 'Oh my God, they are going to have their entourage and they are going to be all uptight but, because it's Sesame Street they are so chilled out and so easy to work with it's a privilege and a joy."

New York-based Fiedler, an in-demand jazz trombonist, is a music director on the show, which is this year celebrating its 50th anniversary.

Music has always been central to Sesame Street and one of Fiedler's key tasks is to write and arrange underscoring cues.

"If Elmo is walking down the street, there needs to be music to accompany him," he explains. "Say he runs into Oscar the Grouch, then we need to have some Oscar the Grouch music."

"And then in every episode there are usually one or two songs. We have a team of song writers. Then I get the song and do the arrangements and then conduct and lead the band in the studio. Every week is very different."

Even after writing as many as 10,000 of these cues, Fiedler is still not 100 per cent sure where the fresh ideas keep coming from.

Too much jazz music is too intense and too difficult for difficulty's sake.

And now Fiedler has combined two of his great loves – Sesame Street and jazz – in one quirky album. Called Open Sesame, it's a quirky series of his own arrangements of classics from the show, including the theme song and the timeless Rubber Duckie.

The music is inventive, fresh and, in places, more than a little silly – which is just how Fiedler intended it.

"In part of it was a reaction to the jazz scene in New York City. I just think too much jazz music being put out is too intense and too difficult for difficulty's sake.

"And also, with where America is politically right now, I though now was the time to make a record that was really fun to break down the seriousness of both the jazz world and the political climate."

Fiedler has been delighted by the reaction to live performances of the arrangements – which he is bringing to Australia this week for two shows – which he puts down to a mixture of nostalgia and the strength of the original tunes.

"People go crazy for it," he says. "The response has been great."