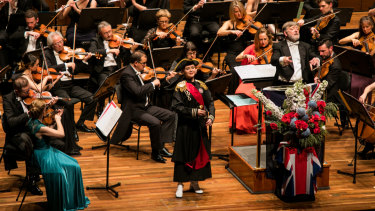 The Melbourne Symphony Orchestra production of Last Night of the Proms.Credit:Nico Keenan

In 2016, Melbourne hosted the first international outing of the BBC Proms, which for a few nights, offered a bite-sized version of the month-long British original. Since then, the Proms' antipodean experiment has been discontinued, but the MSO have clung onto its most crowd-pleasing event, The Last Night.

It's a jolly good knees-up to be sure, and judging by the flag-waving, streamer-chucking masses that packed Hamer Hall, a box office bonanza to boot. But much of this concert was, inevitably, money for old rope. With the audience singing along, Sir Andrew Davis (a Last Night legend in London) led the orchestra through the obligatory Parry, Elgar and Arne earworms, with a few Australian ditties thrown in for local flavour.

Lifting proceedings, violinist Lu Siqing offered a sumptuous account of Saint-Saens' Introduction and Rondo Capriccioso, packed with vitality and tenderness. The ever-astounding Greta Bradman traversed the full spectrum of her range in Rossini's Una voce poco fa and Verdi's D'amor sull'ali rosee, revealing the soprano's surprisingly robust lower register. The MSO chorus were also in fine voice in Berlioz's brilliantly bizarre Tempest Fantaisie, although it was unclear why the ratio of male to female voices was so top-heavy.

But these were all passing divergences from the Last Night ritual, and at the risk of sounding like a buzzkill, aspects of this felt decidedly hollow. The patriotic pageant of London's Last Night is almost two centuries in the making. The MSO should seize the opportunity to craft its own Last Night traditions, rather than merely aping the same outdated tropes.