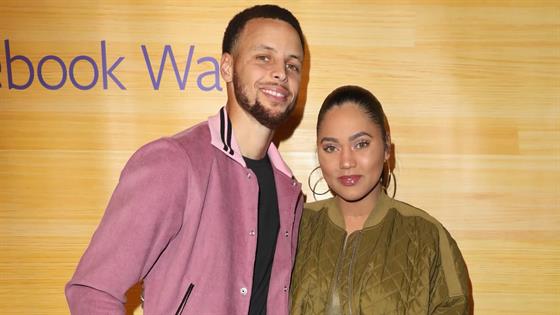 Is there anything that Stephen Curry can’t do?!

On Thursday, the NBA star gave fans an inside look at how he and his family have been faring as they continue to practice social distancing during his vlog series “Lock In with Stephen Curry.”

“I know it’s been challenging for everyone, especially for those who are on the front lines. We thank you so much but it’s now important more than ever to stay optimistic and, you know, find that silver lining,” he said at the beginning of the video. “I’ve been loving all this family time that I’ve been getting here at the household. Just want to give you guys a little sneak peek at what the Curry Quarantine has been like.”

After capturing some fun-filled moments between his wife Ayesha Curry and their children Riley, 7, Ryan, 4, and Canon, 22 months, Stephen showed off his musical talents when it came time to change his adorable toddler’s diaper during a segment he called “Curry Karaoke,” where he serenaded Canon with his dirty diaper song sung in the tune of SWV‘s “Weak.”

“Diapees today and I go away, how the poop comes out,” he sings to his baby boy. “But it stinks inside of you, but it’s got to get changed sometimes ‘cause it’s nasty and it’s gonna stick all the time and I change and I change all day, probably 6, 7, 8. I don’t know what just stinks all day.” Finishing his dirty diaper song strong, Stephen belted, “Can’t explain what your diapee does to me.”

The father of three’s hilarious karaoke skills were just one of the many secret talents that he debuted during the video. In addition to treating viewers to his father-son serenade, he also showed off his dance moves as he bopped along to Drake‘s “Tootsie Slide.”

If one thing is for sure, it’s that the Curry family sure knows how to entertainment themselves. Throughout the vlog, Stephen showcased the ways that his little ones have been keeping busy while cooped in the house, including some inventive hacks to make it feel like they’re playing outside.

While walking on the family’s treadmill, Riley was able to enjoy a virtual walk along the Golden Gate Bridge thanks to her parents’ high-tech workout equipment. She also played a virtual round of golf with her famous dad, who projected the video game on a big screen so it felt like they were playing on a real course.

See how the Currys are tackling social distancing in the epic video above!