The Greatest Guitarists of All Time are on the record. Endlessly recycled by boards of beardy blokes for rock mag listicles, their names and the respective demons that drive their hands to shred and bleed are scripture to any aspiring player. 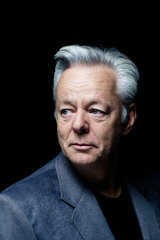 A handful, though, are too good for that nonsense. Certified Guitar Player is the official honour devised and sparingly bestowed by the late Tennessee master, Chet Atkins. Half of that elite sextet, including he, is now sadly deceased. The youngest and sole Australian in the trio of survivors is Tommy Emmanuel.

The title is unlikely to be disputed by anyone who has come in range of the six-string wizard's acoustic fireworks these past four decades. But what demons might have driven this supremely affable entertainer to the absolute pinnacle of his chosen craft have gone unexplored until now.

"I knew Tommy had lost his father when he was very young," says Sydney-born, Nashville-based filmmaker Jeremy Dylan. "I knew that loomed large over his life. But the dark aspects of that, which we confront in the film, were all new to me."

Tommy Emmanuel: the Endless Road, due to premiere at next week's Melbourne Documentary Film Festival, has been four years in production. But the writer-director's research effectively began in his childhood.

Young Jeremy joined the family business editing tour ads, graduated to music videos and made his first feature in 2011, aged 20. Benjamin Sniddlegrass and the Cauldron of Penguins was "pretty bad", he says, so he immediately threw himself into the music documentary Jim Lauderdale: The King of Broken Hearts.

Between that and a longstanding family friendship, Emmanuel was convinced to tell the story that had somehow slipped between the cracks of Australian music history.

"I was really excited and honoured about that," Dylan says, "but at the back of my mind I had this thing which is that Tommy has historically been quite a private person.

"Even if you watch his This Is Your Life episode [of 2005], there is a lot that goes unsaid … so I wanted to make sure that if I was to do this film, we were going to be telling the full story."

Emmanuel was game. "I don't know how comfortable I'm going to be about whatever ends up on this thing," he replied, "but I'm totally willing to talk about anything." 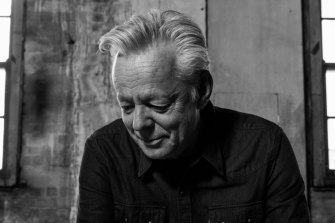 Tommy Emmanuel tells the story that slipped between the cracks of Australian music history.Credit:Ian Laidlaw

Dylan reckons part of Emmanuel's impetus was "having just had his daughter" — his third, Rachel, to his third wife, Clara Rolls — "so I think he was in a really reflective mood and needed to get this stuff down on the record … the stuff that had happened with members of his family, the mistakes he'd made, his drug abuse and addiction, all of that."

A cyclonic appetite for cocaine and alcohol is hardly banner material for films of this nature, of course. Throw a dart at any of those aforementioned Greatest Ever lists and you'll hit an artist flying at superhuman speed simply to avoid the terrors — publicly revealed or otherwise — of standing still.

Dylan's film is different in the important respect that redemption is a work in progress. Far from slowing down, Emmanuel claims towards the end of the film that he's performing more today than the 300 nights a year that defined his destructive lifestyle for so long.

"I think the entertainer role is such an important point to make with Tommy because he would think of himself as that, first and foremost," Dylan says. "His raison d'etre in life is to bring joy to everyone he comes into contact with, and that drives him to an obsessive degree." 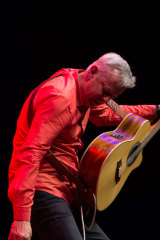 Emmanuel’s ‘raison d’etre in life is to bring joy to everyone’, says filmmaker Jeremy Dylan.Credit:Ian Laidlaw

He picks Keith Richards as a more typical example of the guitar hero/ chemistry set. For him, drugs were "always part and parcel of what he did. That was bound up in the ethos of the music; almost celebrated as a part of what he did and he was comfortable with the idea of that.

"Tommy is someone that is so different [in that] the primary idea is making other people happy, rather than using art as a conscious way to work out his own demons. Even though that's obviously what's going on."

Obvious, at least, to both former wives, who speak with great insight and lasting love in the film. Meanwhile, non-certified guitar greats Steve Vai and Joe Satriani lead a long list of gobsmacked fans who can only marvel, as we do, at the astonishing grace, energy and dexterity Emmanuel brings to the spotlight.

His similarly gifted brother, Phil, also took part before his tragic death last year. Photos and memories from their early family band days — with Dad cracking the whip at their heels — begin a typical happy showbiz tale that turns out to be anything but.

Even after all is revealed, though, and all ongoing dangers considered, the beatific glow of Tommy Emmanuel in full flight on stage has a miraculous way of banishing any shred of darkness at either end of his road.

"Recovery is obviously going to be a one-day-at-a-time thing," Dylan says. "We didn't want to end the film with the idea that everything is fine now; everything will always be fine. Just that he has evolved to a place of self-awareness and being at peace with a lot of the demons … if things aren't a hundred per cent resolved, and they never will be, that things are looking up."

The world premiere of Tommy Emmanuel: the Endless Road screens at Cinema Nova, July 26, as part of the Melbourne Documentary Film Festival.