Reba McEntire and her boyfriend Rex Linn announced they were both diagnosed with COVID-19 during a TikTok livestream. Just Jared reported that McEntire pleaded with her fans via the video-sharing platform after she and Linn got sick. The country singer and the former “CSI: Miami” actor are both on the road to recovery now, but McEntire said COVID-19 is “not fun.”

While the virus has not been fun, it’s clear that McEntire and Linn are having a blast together in the grand scheme of things. The couple started dating in 2020, and many fans assumed they met on the set of “Young Sheldon.” Linn stars on the CBS series, and McEntire appeared as a guest star. But the country star told Andy Cohen (via YouTube) that she and Linn actually met in 1991!

McEntire said, “I met him in 1991 when we were doing the movie, Kenny Rogers movie, ‘The Gambler.’ We were both on that in 1991 and we’ve kept in contact with each other over the years and we both know the same people. So it was just like good friends getting back together having dinner in January, then we started texting and talking on the telephone getting to know each other better during the quarantine.”

Keep reading to find out more about the plea McEntire made to fans after contracting COVID-19. 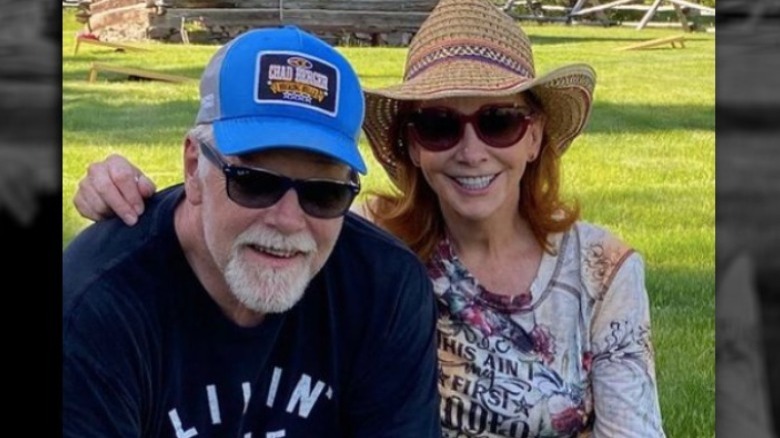 Reba McEntire and boyfriend Rex Linn got COVID-19 despite being vaccinated. According to Just Jared, the country superstar made a plea to fans on TikTok. McEntire said, “Stay home. Just stay safe. Stay healthy. It’s not fun to get this. I did get it. Rex and I got it and it’s not fun. You don’t feel good.”

McEntire continued, “We were both vaccinated and we still got it, so stay safe, stay home, and be protected the best you can.” Just Jared also reported that McEntire’s video gave fans news about upcoming concerts. Linn and McEntire made their couple status red carpet official at the 2020 CMA Awards.

“I have no idea what plans for next year are. You know, the COVID thing has really hit hard and spikes are going everywhere right now… and it’s all over the country… so we don’t have an idea,” McEntire said. “We have plans right now to go back on tour in January, February, and March…We’re just gonna move forward, keep prayin’ that everybody stays safe and healthy, and wear your mask and just be safe.”

Fans are breathing a sigh of relief that the beloved country star and Linn are on the mend.