Peter Asher could pick a hit song at 19, even if the finest songwriters on earth thought it was a bit rubbish. "Please lock me away" was the daft opening line that ensured Paul McCartney's A World Without Love would never be mop-top material.

At the time, the cute Beatle was dating Asher's sister Jane and living in the family guest room in Cavendish Avenue, NW8. The canny brother downstairs borrowed the tune from the reject pile and had his first worldwide number one in February 1964. 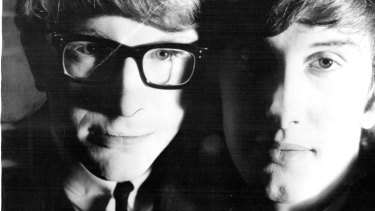 So begins the charmed life story the bespectacled half of Peter and Gordon will tell, in between his and other songs from rock 'n' roll's golden age, on stage with fellow journeyman Albert Lee (Emmylou Harris, Eric Clapton, the Everly Brothers) in Australia in August.

As pop lives go, its perfect mix of outrageous good fortune and shrewd commercial judgement is perhaps best illustrated by the coolest entry on any CV, ever: Head of A&R, Apple Records. 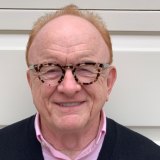 Peter Asher: ”Everyone now tends to be more worried about, you know, ‘We have to have a hit’.”

"It was an intimidating job," Asher concedes of the post he held at the invitation of the Beatles from 1968 to '70. By then, Peter and Gordon (Waller) had had their squillion-selling moment in the sun.

"I didn't spend too much time thinking about it, put it that way," he says. "I took the job in a flash."

In the subsequent half-century, the role of an artist and repertoire manager, "which is to say who gets signed, what they sing, who produces their record and what musicians get hired" remains unchanged, he says. Mostly.

Back then, "we'd have our meeting throughout the week with as many Beatles as were able to show up, and talk about who we were signing and what records we were making and so on."

When those decisions were made — for Mary Hopkin, say, or Badfinger, Billy Preston or Rhada Krishna Temple — "they were left alone to make the best record they could, a bit more than they are these days, because everyone now tends to be more worried about, you know, 'We have to have a hit.'

"They always wanted hits, of course [but] with the nature of the whole industry changing and how you make money … there's less willingness to indulge an artist in making two or three albums. Now it's got a bit more desperate," he chuckles.

Asher's very first production job in '68, the self-titled debut from an American hopeful named James Taylor, didn't set charts on fire. But his faith remained strong enough to draw him away from the imploding Apple empire in 1970 to become Taylor's manager.

Asher heard a new kid named Ed Sheeran on the radio and tracked him down.

In 1995, he shelved his management company to become senior vice-president of Sony Music International.

"The first time I came to Australia wearing my Sony hat," he says, "I remember going to [the Sydney] office and saying, 'So what's going on? Who have you got that's great?' On that trip I heard Silverchair and Tina Arena and I remember thinking, 'Well, this is gonna be easy'."

Another dozen or two pop cycles later, picking hits remains second nature. Eight years ago in London, Asher heard a new kid named Ed Sheeran on the radio and tracked him down to tell him he had a big future. Today he's in New York for his annual pilgrimage to the Songwriters' Hall of Fame awards.

"I remain as much a fan as anything else," he explains.

It was a benefit concert for a friend — Mike Smith of the Dave Clark 5 — that lured him back to the other side of the microphone in the mid 2000s. Peter and Gordon found their harmony miraculously intact after 27 years apart, and they performed intermittently until Waller's passing in 2009.

The more recent pairing with legendary English guitar sideman Albert Lee has brought a wider repertoire of songs and memories, Asher says. "Of course we both know all of the Everly Brothers' songs by heart … and as Albert rather ingraciously pointed out one day, between us we have over 100 years' worth of stories."

You can read what you like into the fact that I've been in Mensa for 60 years and I've been to two meetings. 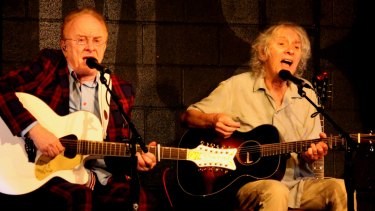 Peter Asher and Albert Lee perform in Australia in August.

For Asher's part, they're destined to remain oral history. "One of the reasons I'm leaning towards not writing an autobiography is that it seems to me that everybody who worked in the Apple building has written a book except me and the Beatles, so I thought maybe I'd keep it that way."

Instead of the sprawling memoir, he's boiled it down to greatest hits. The Beatles From A to Zed, a dictionary of tales and factoids drawing on his ongoing satellite radio program of the same name, is due in November.

"Everything about the Beatles is exceptional," he says. "It was a unique and remarkable coalition of these four extraordinary musicians; extraordinarily good songs by any measure; incredibly well played, well-sung … Everything about the Beatles can be described in superlatives. It was one of those giant, happy accidents. Like the big bang," he says.

Whether it was a happy accident or something more like genius that made him pick up that discarded McCartney tune back in '64 remains a mystery. But surely the fact that the legendary hit-picker has, since his teens, been a certified member of Mensa is not to be sniffed at?

"You can read what you like into the fact that I've been in Mensa for 60 years and I've been to two meetings," he says. "You know, I'm over 70 now, so when I went to get my driver's licence I had to take the eye test again and I'm thinking 'It's a good thing Mensa don't make you take the IQ test again'. I've got quite a few less brain cells now. I think I'd politely bow out."