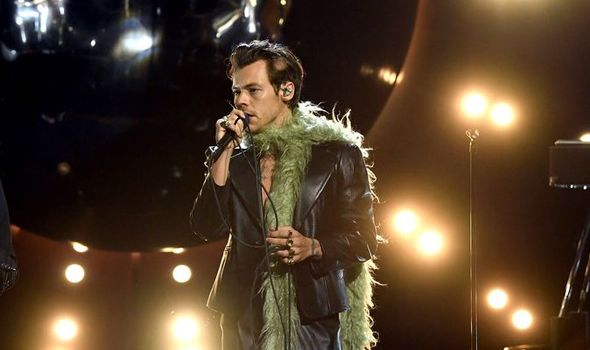 WHEN HARRY Styles becomes the first headline act to appear in concert at New York’s new $1.5billion UBS Arena this month, it will be the climax of an incredible 12 months that has seen the singer from a quiet village in Cheshire become one of the most iconic figures in modern British culture. Perhaps only his friend Adele is as prominent on the world stage. And he has done it all without losing his reputation as one of the nicest men in music.

There are several key factors in his success. He is not just a pop superstar; Harry has conquered the world of fashion and become a sought-after actor. His legion of fans see him as an authentic, thoughtful man who cares about the things that matter to them – racism, mental health, and equality. Almost exactly a year ago, the 27-year-old was revealed as the first solo man to grace the front cover of Vogue, at the personal invitation of editor Anna Wintour.

While his Vogue issue sold out on newsstands, Harry set about making two feature films.

During the shoot for the first, Don’t Worry Darling, set in Fifties American suburbia, he began a relationship with the director, actor, and activist Olivia Wilde, 37.

She has said of Harry: “I hope this brand of confidence as a male that Harry has – truly devoid of any traces of toxic masculinity – is indicative of his generation and therefore the future of the world.”

Olivia has been spotted enthusiastically dancing in the wings as Harry’s triumphant Love on Tour concerts swept across America this autumn. After her film, Harry moved on to star in the drama My Policeman, playing a gay police constable in Brighton involved in a long-standing relationship with the novelist E.M Forster.

Harry was able to take some time off to receive a BRIT award and his first Grammy – sporting a lilac feather boa – for his hit Watermelon Sugar.

Both films are expected to be released in 2022 but there was a chance to see Harry on screen earlier this month when he popped up in Eternals as the Marvel creation, Eros, in a post-credits scene that traditionally acts as an appetiser for a future story. Harry Styles as a comic strip hero will be something to savour.

He has always been fearless in his choices whether advancing his career in fashion, film or music – except of course during his first X Factor audition in 2010 when he sang the cheesy Isn’t She Lovely, which was about as safe a choice as you could get.

Mogul Simon Cowell, however, always recognised his potential – offering the masterful understatement: “You could be very good.” The major surprise during that unforgettable 2010 season was that Styles did not progress as a solo artist. But Cowell admitted that it was simply his age. At 16, Harry might have been lost if he had gone up against eventual winner Matt Cardle, ten years older. But Cowell had seen something in Harry.

All five of the boys in One Direction had natural talent and good looks but Harry was the one who, in Cowell’s words, had “unbelievable charisma” and was a “natural frontman”. Mr Cowell is far too shrewd to admit it openly but it’s easy to conclude that the ntlmi arou re band was actually formed around Harry Styles. Critics at early 1D concerts reported that if they closed their eyes they knew it was Harry’s turn to sing because the noise levels among the young female fans rose by many ear-splitting decibels.

He was always the one in One Direction. The group conquered the world of course, selling 70 million records in just six years, but great success as a group is no guarantee of similar glory when you go it alone. Many have to reform to recapture the fame and financial rewards. Backstreet Boys, Westlife and Take That are just three superstar boy bands who have found renewed fortune second time around.

Robbie Williams is the only comparable ex-boy band British superstar but even he has been outstripped by the younger man.

In musical terms Harry is very unlikely to match Robbie’s outstanding record of 18 BRIT Awards but the former Take That favourite has never conquered America and would not be selling out a 42-date tour in 2021. Harry was widely expected to be the first member of One Direction to go solo but was beaten to it by Zayn Malik.

That worked to his advantage as he could be thoroughly prepared without upsetting any fans. His new big-time American management, musical collaborators and major record label were swiftly in place. He was the only member of 1D to be taken on by the band’s US label, Columbia. He also started his own label, Erskine Records.

JUST AS importantly, much of the Harry Styles persona that separated him from the boy band was already there or ready to be put in place. Some of the signs of the cultural symbol he would become were already evident.

He had been crowned the winner of the British Style Award at the 2013 British Fashion Awards at the age of 19. He filmed his acting debut in the acclaimed war movie Dunkirk in 2016 before he had released his debut number one album.

Right from the start, he surrounded himself with the leaders of modern culture – able to talk philosophy with Alain de Botton or fashion with supermodels Cara Delavingne and Kendall Jenner; or just simply spending his 25th birthday alone and unbothered in a Tokyo café reading a book by Japanese author, Haruki Murikami.

HARRY’S role model for a successful transition to global solo fame was not Robbie Williams but Justin Timberlake. The multi-award winning American superstar, now 40, crosses the borders of music, acting and fashion just as Harry has done – even starting his own clothing label, which is something the business-savvy and well named Mr Styles might do in the future.

Harry was recently named as the second richest young UK musician with a fortune of £80million. His great friend Ed Sheeran came first, although Ed is already 30, so Harry will take top spot when the next results are published.

But what raises him to iconic status is the way he embraces the issues that are important to a modern generation, supporting what he calls, “the fundamentals of decent human behaviour”. On his latest tour, as he has always done, he waves on stage both a Black Lives Matter and a Pride Rainbow flag.

He took part in a peaceful BLM protest through the streets of Hollywood after the killing of George Floyd; he donated $42,000 of his last tour’s profits to the Time’s Up legal fund to support victims of sexual abuse.

And just last week he stopped his show in Milwaukee to help one fan come out to her mother. His defence of his young girl fans perfectly encapsulates his absence of toxic masculinity.

“How can you say young girls don’t get it?” he has argued. “They’re our future. Our future doctors, lawyers, mothers, presidents, they kind of keep the world going.” A very modern icon – and a man of many directions.