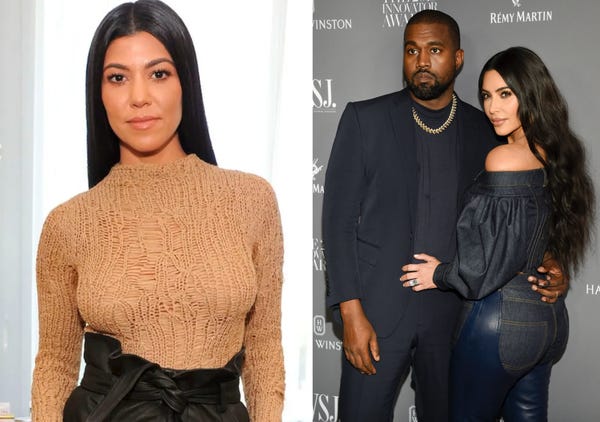 In the proceeding Instagram story about "The Best Vote Merch for 2020," Kardashian also wrote, "my favorite coming next slide." Both slides were linked to a post about "Voter Merch" on Kardashian's lifestyle website Poosh, which also advertised a Kanye 2020 sweatshirt and a link to his campaign website.

The Kardashians have been mostly silent regarding West's erratic presidential campaign. Kim Kardashian West previously appeared to endorse her husband, quote-tweeting his initial campaign announcement in July and added an American flag emoji. Since then, she has addressed West's mental health, asking the public for "compassion and empathy" in a July 22 statement she released after one of West's Twitter outbursts.

Although his name won't appear on ballots in most states, West has continued to campaign, most recently releasing a campaign video that argued for a renewed "commitment to faith." Republicans in at least 6 states have aided West's effort to get on the 2020 ballot, The New York Times reported.

Mental health and media experts previously told Insider that West's presidential campaign should be considered in the context of his bipolar disorder. West has spoken publicly about his bipolar disorder diagnosis and his decision not to take medication.

Kourtney Kardashian's Instagram endorsement appeared to anger some of her fans. YouTuber Tyler Oakley tweeted that her story was "so embarrassing."

Critics of West's campaign include those arguing that he, either intentionally or unintentionally, is helping President Donald Trump by taking theoretical votes from former Vice President Joe Biden. One response to Kardashian's last tweet says "A vote for [West] is a vote 4 Trump."

A publicist for the Kardashian family previously declined to comment to Insider about West's campaign.