There's an art crime scene at 1024 Manzanita. Nestled in the neat desert garden in the stinking heat of the Los Angeles summer, behind pale blue weatherboard and a white double-garage door, Kirin J Callinan has just purloined the concept album of the century.

When that door was open to the street, "which it usually was", says the Aussie rock provocateur, "you would have seen a lot of equipment with [price] tags hanging off. Plastic still on the pick-guards of the guitars; tags hanging off keyboards and electronic drums; acoustic drums with stickers still on." 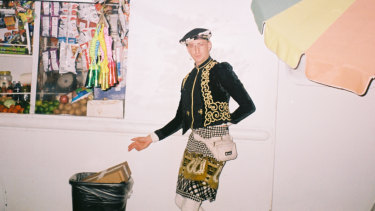 Everything in the makeshift studio, he explains, was new from Guitar Center, West Hollywood. Instruments, cables, effects, plectrums, microphones, lights and multi-track recording gear were all purchased with the $US8888.88 (about $12,000) budget of Callinan's new album, Return To Center.

Then, exactly two weeks later, album done and dusted, everything was repacked in carefully stored cartons and returned to the Center (get it?) under the store's convenient 14-day refund plan.

It gets better. Return To Center is a covers record. The Waterboys. Ultravox. Billy Fields. MIA. Public Image. Borrowed songs, borrowed instruments. It might all be a brilliant, scathingly cynical commentary on recycling and disposability if it weren't for one thing.

"These songs are far more personal to me that any song I've ever written," says the alleged enfant terrible of indie rock. "You write a song and you wrestle with trying to get to the point. You forget what the point even is, half the time, or you lack the tools to articulate it clearly.

"These songs articulate how I feel better than anything I've ever done, and they've spoken to me on a personal level, so really, I feel this record to be more honest and more personal than any of the others."

I went to this music festival, Coachella, and I just don't understand what the hell is going on.

If you only knew Kirin J Callinan for his shock-horror, penis-flashing headlines from the ARIA red carpet last year, or as the chief architect of that epic video where Jimmy Barnes screams in the sky for a very long time (Big Enough from his 2017 album Bravado has nearly 42 million views), you might find claims of "honest" and "personal" slightly suspect.

It's the price Callinan pays for some serious disruption of rock's po-faced orthodoxy. He was taking the piss, obviously, when he urinated in his own face on the cover of his Bravado album in 2017.

But his dad was in the Radiators, for goodness' sake. A healthy respect for the absurdity of the game is in his DNA. 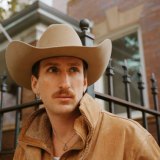 His commitment to the art of song, meanwhile, is beyond refreshing. In a world of tedious tribal flag-waving, his covers of Momus' The Homosexual and Randy Newman's Pretty Boy take a scalpel to the bone.

In his version of PiL's Rise, he conflates his own media vilification of last year with the struggle of Nelson Mandela. Suck on that, panel show culture warriors. And yes, this time, it's all palpably personal.

"I've never really been f—ed to learn someone else's song. I've always wanted to make my own noise because that's the kind of self-important little brat that I am," he says.

The one self-penned song on Return to Center is the title track, a lovely instrumental centrepiece interrupted in the exact centre (hang on … ) with 30 seconds of tortured, maniacal laughter. A toss-up between agony and comedy: the heart of the matter or what?

"I'm pretty confused by the world," Callinan says. "Maybe that's why I'm so excited by it. I went to this music festival, Coachella, and I just don't understand what the hell is going on. I'm watching these acts that people apparently love and I really don't understand it.

"I guess I'm a part of that, [but] my intention is really to make unquantifiable work and to explore ideas or regions unknown."

So how do the folks at West Hollywood Guitar Center feel about being roped into this year's expedition?

"I haven't heard from them. After we finished the record, we did email them and told them about the plan … Really, my ultimate 'return to centre' would be if they were to champion the album and to stock it in stores.

"Maybe I could do a tour all around America at Guitar Center stores, performing the songs on the gear that I bought from them. I'd be like a travelling salesman."

Any pop star who claims they're not is less honest than this one. And covers and all, few will ever make an album as fearlessly original as Return To Center.

"I guess there are two ways to look back at it," he says. "One is, it was a punk sort of idea where I'm stickin' it to The Man; taking the most generic corporate music store in the world for a ride."

Then again, he says with all sincerity, "I'm celebrating their customer-first model, their very generous return policy – which is a big selling-point for the company. I've made a beautiful-sounding record, I think, using exclusively their products.

"It could be seen as good PR for them. If they sue me, that's probably going to be good press too. I’ll leave it in the lap of the Guitar Center gods."