Feuding rappers are common in the music industry, but we did not expect to see a rivalry develop between “Trollz” hitmaker Nicki Minaj and immunologist Dr. Anthony Fauci. During the pandemic, Fauci has become a celebrity of sorts. He serves as the president’s chief medical advisor, and Americans look to him for updates on the spread of COVID-19 and the vaccines that have been developed to reduce death rates and hospitalizations. He also made the news frequently during the final months of Donald Trump’s presidency because he was often a target of the former president’s ire. Trump even complained about how much airtime Fauci was getting, per Politico.

As reported by CNN, Fauci got acquainted with some big-name celebrities when Kim Kardashian set up a video call with the doctor last November. She, Katy Perry, Orlando Bloom, and Gwyneth Paltrow were part of the group that quizzed him about the coronavirus. He was also interviewed by “Pretty Woman” star Julia Roberts for ONE’s Pass The Mic campaign, and she called him “maybe the coolest man on the planet right now.” One more sure sign of Fauci’s star power was the reports that the producers of “Dancing with the Stars” wanted him to compete on the show. “Dr. Fauci, while flattered, would respectfully decline,” a spokesperson for Fauci told the Daily Mail of the possibility of the infectious disease expert putting on his boogie shoes. Maybe it’s not that weird that he’s beefing with Minaj after all. 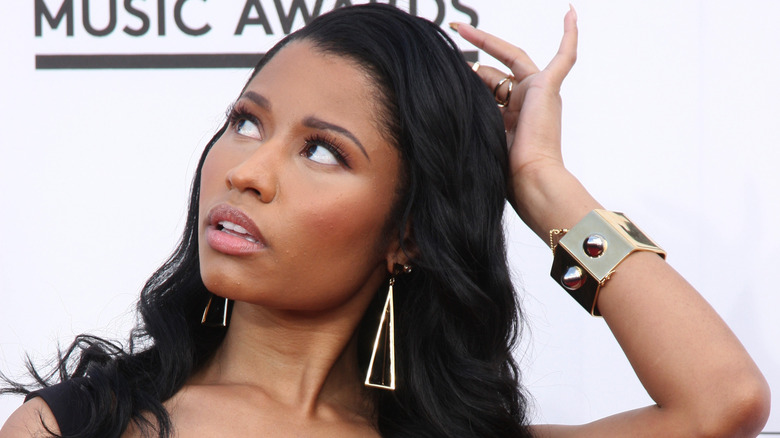 On the day of the 2021 Met Gala, Nicki Minaj set the Twitterverse on fire by tweeting that she would not be attending the event due to the requirement that all guests must be vaccinated against COVID-19. She explained that she wanted to complete her own “research” on the vaccines before deciding if she would get vaccinated. And that wasn’t all the outspoken artist had to say on the matter. She later shared a bizarre anecdote that was seemingly meant to serve as a cautionary tale. “My cousin in Trinidad won’t get the vaccine cuz his friend got it & became impotent. His testicles became swollen,” she wrote. “His friend was weeks away from getting married, now the girl called off the wedding.”

It wasn’t long before the story became Twitter’s latest punchline, with journalist James Felton suggesting that what Minaj really shared was a “flimsy alibi” for a totally different kind of infection. During a CNN interview, Fauci fact-checked Minaj’s tweet. “Dr. Fauci, is there any evidence that the Pfizer, the Moderna, or the J&J vaccines cause any reproductive issues in men or women?” host Jake Tapper asked him. “The answer to that, Jake, is a resounding no,” he replied. Fauci also chastised Minaj, adding, “She should be thinking twice about propagating information that really has no basis except a one-off anecdote.” Maybe the rapper will reach out to the actual infectious disease expert while she’s conducting her vaccine research.