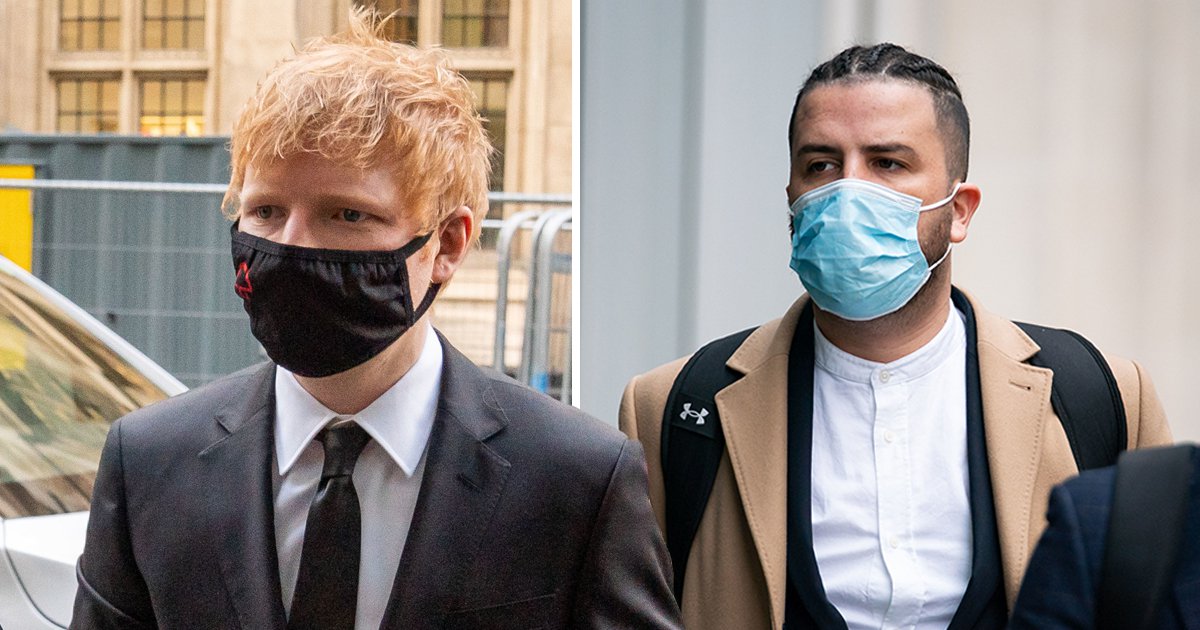 Ed Sheeran appeared in court this morning as his plagiarism case continues.

The singer-songwriter, 31, is fighting a copyright claim against his monster hit Shape Of You, which two songwriters claim rips off parts of their track.

Writers Sami Chokri and Ross O’Donoghue allege that the 2017 hit infringes ‘particular lines and phrases’ of their own song Oh Why, released in 2015.

Mr Sheeran and his co-writers of Shape Of You, Steven McCutcheon and John McDaid, began legal proceedings in May 2018, asking the High Court to declare they had not infringed Mr Chokri and Mr O’Donoghue’s copyright.

Two months later, Mr Chokri and Mr O’Donoghue issued their own claim for ‘copyright infringement, damages and an account of profits in relation to the alleged infringement.’

The trial began on Friday and is expected to last for three weeks.

Mr Sheeran attended in person both on Friday and to appear in the witness box today, where he denied claims he ‘borrows’ from other songwriters.

The Grammy winner turned up to the Rolls Building in central London wearing a black suit and tie and face covering.

On Friday, Andrew Sutcliffe QC, for Mr Chokri and Mr O’Donoghue, said Mr Sheeran ‘borrows ideas and throws them into his songs, sometimes he will acknowledge it but sometimes he won’t.’

The barrister alleged the acknowledgement depended on how famous the other artist was, adding the two songwriters ‘are not Shaggy, Coldplay, Rihanna or Jay-Z, if they were they would have been treated in a very different way.’

At the start of his evidence on Monday, Ian Mill QC, for Mr Sheeran, asked: ‘Do you accept that you behave or have behaved in that way?’

Mr Sheeran said ‘no,’ before adding: ‘The examples he has been using are obviously famous artists, two of them are people I’ve made songs with.’

Mr Sheeran continued that ‘if Mr Sutcliffe would have done his research,’ he would have known there were ‘lots’ of unknown artists he had cleared parts of songs with.

Continuing to refute the allegation, Mr Sheeran gave several examples of when he had cleared aspects of songs with unknown artists, including sampling a part of a song from the TV show Buffy the Vampire Slayer from an ‘unknown composer.’

‘All those examples are not famous artists that we’ve cleared songs with and that’s what I have to say on that,’ he said.

Mr Sheeran was branded a ‘magpie’ by Mr Sutcliffe when proceedings began, stating that he is ‘undoubtedly very talented, he is a genius’ butMr Chokri and Mr O’Donoghue are also ‘very talented’ and they ‘deserve the same respect as any other artist and due recognition where recognition is due.’

Mr Sheeran’s lawyers previously told the High Court that the singer and his co-writers have no recollection of having heard the song Oh Why before the legal battle and ‘vehemently deny’ the allegations of copying.

Mr Sheeran also denied that he was aware of Mr Chokri, a grime artist who performs under the name Sami Switch, earlier in his career.

Under cross examination from Mr Sutcliffe, it was put to Mr Sheeran that he must have been aware of Mr Chokri, because they appeared on YouTube channel SBTV at around the same time, they shared friends, Mr Chokri had sent messages to him on Twitter and Mr Sheeran had allegedly shouted his name at a performance.

Mr Sutcliffe asked him: ‘You’re saying you definitely weren’t aware of him, rather than you’ve forgot that you’re aware of him?’

He earlier told the court that it was ‘very unlikely’ he was asked to shout Sami Switch’s name at a performance, explaining that he does not do ‘shoutouts on stage’ as he would ‘feel bad’ if he forgets.

Mr Sheeran said he receives ‘hundreds of thousands of tweets,’ but that he didn’t ‘look through it.’

Mr Sheeran told the court that Mr Edwards ‘championed lots and lots of artists’ and that ‘it wasn’t like I watched every single video he uploaded.’

He also said: ‘I followed him on Twitter, it doesn’t mean I read everything he wrote.’

Shape Of You rapidly became a worldwide hit following its release as one of the lead singles from Mr Sheeran’s album Divide.

The track was the best-selling song in the UK of 2017 is the most streamed song in the history of Spotify.

The trial before Mr Justice Zacaroli continues, with judgment expected to be reserved until a later date.