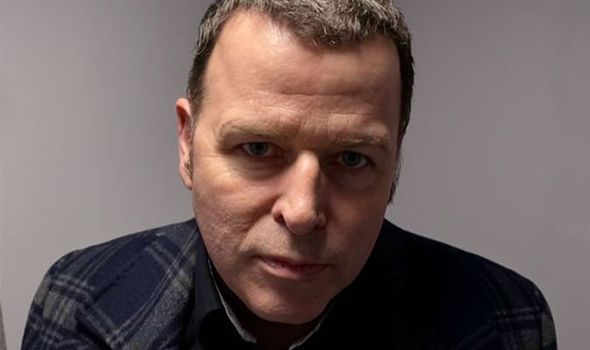 A hefty chunk of that revenue was generated by his biggest hit – the wonderful slice of surging optimism that was Things Can Only Get Better.

A minor hit in 1992, the song shot to Number One in 1994, selling an impressive 600,000 copies. It was a hit again in 1997 when Tony Blair adopted it as New Labour’s campaign anthem. But after that, things could only get bitter.

“I was so disillusioned with Blair,” says Pete, 55. “The war in Iraq? Not in my name. I’ve been accused of being complicit in that, so for me the record is tainted. Don’t even start me on Afghanistan, I can’t get my head around it.”

Yet in lockdown, the song became an anthem of hope. “They used it during Clap for Carers in Nottingham, and it spread. It was really touching. It took on a life of its own.”

D:Ream seemed to come from nowhere, but as singer/guitarist Cunnah laughs, “I’d written 300 songs before I got that one. I was 21, old for a pop star.”

He had formed house band D:Ream in 1990 with his original collaborator, DJ/producer Al Mackenzie. But success was too much for Edinburgh-born Al. “I left after the first album,” says Mckenzie. “I couldn’t deal with it. I liked the music, but the whole thing was overwhelming.”

He recalls getting blotto at Top Of The Pops, and falling out with a producer, and groans when I ask him about his hungover appearance on children’s TV show Gimme 5, where the band were interviewed by the costumed character Nobby the sheep.

“D:Ream weren’t pop,” Al insists. “That’s why I left, because pop was where it was going. I didn’t want to do kids TV music. But Pete immersed himself in pop, going on a tour with Take That, I wouldn’t have done that…”

Cunnah reflects, “I wanted bigger audiences, he said ‘No, we’re getting too pop’. He’s a good leveller, the yin to my yang.”

At the peak of fame, Pete recalls coming home from an overseas tour to find five fifteen-year-old fans camping outside his Ladbroke Grove home. “They’d seen us on the Take That tour. I told them, ‘Do yourselves a favour, go and find some young lads and come back to me and tell me how it went…’ I never saw them again.”

Fans inundated D:Ream’s management office with cuddly toys. “We’d gone from playing to 40,000 clubbers to being like teen heart-throbs,” Pete laughs. “We were taken three or four bin-liners of cuddly toys to charity shops every day.”

At one point, Cunnah recalls his tour bus was blocking one end of his road while another tour bus, belonging to neighbour Heather Small’s band M People, was blocking the other.

Welder’s son Al stuck around long enough to perform in the 1994 touring version of D:Ream which featured then-unknown cosmologist Brian Cox on keyboards.

“Brian got a summer job because our tour driver was sick,” says Pete. “He was such a bad driver it was never entirely sure that we’d make the gig. Then we heard him play keyboards and he was better at that than driving. He was a great lad, his hero was Carl Sagan. I remember he brought a book on tour which was all hieroglyphics and symbols. He spent a lot of time explaining things to stupid people like me, which is basically what he does on TV.

Now based in Staffordshire, Al remembers Brian having “really long straight hair and terrible dress sense, tartan trousers, tartan waistcoat and nothing else matching… there was no styling going on with us, whatsoever.”

The early creative tension at the heart of D:Ream still shapes their music. Their recently released latest album Open Hearts, Open Minds is critically acclaimed, but although Pete says he’s written enough in lockdown for two more, Al counters: “We’ll see. He’s got one song I won’t have anything to do with, The Ostrich or something – not with my name!”

Peter, who was raised Catholic, now lives in County Donegal in southern Ireland but calls me from his father’s house in Londonderry over the border.

“He was on HMS Decoy when the Cuban missile crisis was going on. He could tell you stories to make your toes curl.”

We don’t stream, the returns are terrible

Pete was adopted. Mum Monica was a factory worker; Les became “an old school insurance salesman, walking the streets collecting pennies for premium payments”. He has since been reunited with his birth mother, Anna McCrea, former singer with 1960s showband The Marines.

He saw Johnny Cash live that year too, “the closest to a religious experience I’ve ever had.”

He started playing the guitar at ten, went electric at 14 and at 15 formed indie rock band Tie The Boy. They were snapped up by U2’s label, Mother, but success eluded them. “We were just chasing girls and glory in the shadow of the war,” he says wistfully. “We ended at 21 with everyone getting married and mortgages. I took the red pill…”

His friend Victoria — better known as renowned sound engineer Raine Shine — let him sleep on her floor. “She taught me how to use all the synthesisers. I learned how to arrange, program and produce. I was the go-to guy by the time I met Alan. He had the dance floor kudos, I had the know-how.” Pete also had U R The Best Thing, Top 5 in 94.

Al’s musical journey was different. His father had introduced him to the music of Fleetwood Mac, Roxy Music, Bob Marley. “I progressed into funk and hip-hop.”

The family relocated to Surrey when he was 15. “I worked as a bank clerk in the 80s at Nat West in Piccadilly and got into acid house.” He started DJing and at 21 was running his own parties in Soho. He met Pete at The Brain club. “Neither of us was cool,” he says, “but we were going out to cool places.”

They started just making music, and then became a band by osmosis. “At Brain, we always had little acts on. I mimed played the keyboards, Pete sang, and the backing singers danced around. I’d never end thought of being in a live band and it took a while for me to be comfortable performing. I was no musician. It’s taken me thirty years to get this far. But I know what I’m doing. I’ve got a good ear.”

Leaving in 94, Al missed the madness of two world tours in 1995. D:Ream had two Top Ten albums and ten hit singles. Pete puts that in perspective. “Prince was stratospheric, we were touching the bottom of the cloud.”

Cunnah’s love of parties resulted in a conviction for “making repetitive beats”. After D:Ream, he married, had children, divorced, and remarried. He wrote and produced for various acts, and started lecturing in record production to simply pay for the cost of the divorce.

Al DJed, mixed records and bought a nightclub – “never again!” he exclaims. The pair reformed D:Ream after a chance meeting in a park in 2008. “We decided to play around in the studio and see what happened.” The result was the 2011 come-back album, In Memory Of…

Life-long Hearts fan Al admits his brutal honesty can be his undoing. “I don’t really suffer fools. I used to be a bugger. Now my brain goes into gear before I speak.”

Both are against streaming. “We don’t stream, the returns are terrible,” says Al. “The sale of one album is the equivalent of 100,000 streams. We’ve become a cottage industry. It’s an uphill struggle. People our age don’t buy records but we’re getting lots of love.”

Pete says the new album is “about keeping connection with the fans”.

“We have live gigs coming up and a tour next year. In lockdown, we started to make our own videos. Now we’re thinking about making a movie. Why not? I dream big!”

* Open Hearts, Open Minds by D:Ream is out now.