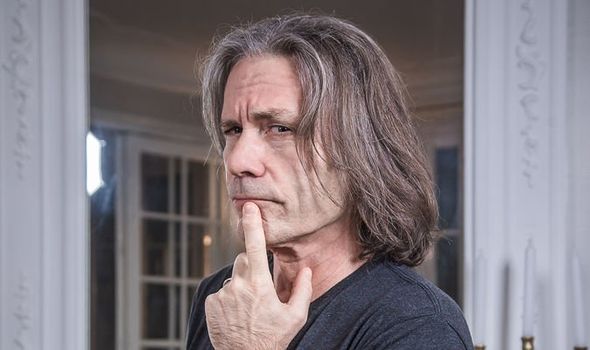 Bruce, 62, will reminisce about his years as a boarding school rebel and “explain how I ended up singing instead of drumming or joining the army, and the story of my ridiculous trousers. “But,” he says, “the last third of the show is entirely adlibbed. The audience are given cards for questions and comments. I see them in the interval, shuffle them around and create an improvised script. You have to think fast and laterally but it can be very funny.

Could Maiden have a secret love-children?

“We weren’t exactly choir boys,” Bruce says candidly. “Especially at the beginning, 23-year-old lads in America… talk with an English accent, and women’s clothes dropped off before your eyes. But the main event with us was always on stage, not off it. We always took it seriously.”

Bruce came slightly late to the Maiden party, replacing original singer Paul Di’Anno in 1981, in time to lend his operatic vocal range to the East End band’s third album, the multiplatinum Number Of The Beast, and first top ten single, Run To The Hills.

Not everyone was impressed. One fan complained that Bruce’s singing was ‘like listening to my favourite songs through an air raid siren’. Maiden responded by dubbing Dickinson “the Human Air Raid Siren”, turning the negative into a positive.

Since then, the band have sold more than 100million albums worldwide. Have you turned into a British institution, Bruce?

“I might end up in one,” he snorts. “We’re immensely proud of being British. We’re a little bit eccentric and quirky and we don’t fit easily in a heavy metal category. We’ve got our own identity and we side step all attempts to put us into a little box.

“Our relationship is not with the media, but with our fans. They’re like plywood, every year we add a layer…”

Despite Bruce’s protests, heavy metal is in his heart, his soul, and even his left leg, thanks to recent surgery.

“I had five and a half inches of titanium hammered into my thigh and was up walking the same day,” he says proudly.

Decades of jumping around on stage had eroded the cartilage in his hip joint. “The fencing played a part too,” he says.

“I fence left-handed so my left leg takes the brunt of it. I was hobbling around last October and the surgeon said, ‘Your cartilage has worn out’. I said, ‘Can we just change it now?’ A week later, the crutches were gone and I’d started physio. I’ve been cycling, I’m doing weights. It’s incredible.”

The irrepressible Dickinson is the only child of a shotgun marriage between an aspiring ballet dancer and an ex-soldier. He was brought up by his formidable grandmother in Sheffield while his parents toured with a performing dog act. When they got regular jobs – estate agent and car salesman – he was dispatched to Oundle boarding school at 13.

Bruce’s school horror stories take up a chunk of his first half. He famously had two tons of horse manure delivered to his housemaster’s front door and was expelled for defrosting the headmaster’s runner beans in an unorthodox way.

“If I’d been around in this day and age, I would’ve been medicated at an early age,” he laughs.

Dickinson joined the TA before studying history at London’s Queen Mary College and joining his first metal band Samson. A can-do person, when Samson’s manager forgot to book them a tour to promote their first album, Bruce jumped on the phone and did it himself.

He has rival careers as an airline pilot and beer brewer “because I love them,” he says. “Life’s too short to do things you don’t love.”

Not all his ventures have turned a profit, but he says “If money is your only arbiter, rob a bank.”

Fate dealt him a bum hand in 2014 when he was diagnosed with cancer of the head and neck.

Postponing a tour for treatment, Bruce advised Maiden’s manager to “tell them the reasons are too tumorous to mention”.

He says “I get questions about cancer and what I try to do is make cancer amusing and serious and sad all at the same time – a bit of dark humour to allay a lot of the fear that goes with it, hopefully funny and a bit informative.”

He talks about flying jumbo jets, the band’s own Ed Force One plane (named after Maiden’s monstrous stage mascot, Eddie), and bringing troops home from Afghanistan.

Maiden anecdotes can be scary. At a concert in Florence, a Kiwi roadie was so incensed by seeing a man assault a woman that he broke his jaw, only to learn he was a mafia don. He returned the next night in Naples “with heavies with bulges in their suit pockets,” says Bruce. “He said, ‘Where’s the Australian? I kill him!’ We said he’d taken off in fear, but we’d hidden him in the bay of the bus.”

Other tales are hilarious, not least the terrifying experience of flying with Maiden drummer Nicko McBrain. All are told in graphic detail “so be careful bringing small children to this show.”

One of nature’s cavaliers, Tory-voting Bruce finds himself at odds with lockdown measures.

“I’m not an anti-vax conspiracy theorist but there’s such a lack of joined-up thinking, it’s quite frustrating. I had to go to France because my girlfriend had an eye operation. We’re both double vaccinated, and when we came back we had four nasal swabs, we took the tests and were all clear, yet we’ve still had to quarantine. Are we all mad?

“I don’t think most of the SAGE committee know any human beings at all. They’re like a weather forecaster who never looks out the window. Do they have any real clue what effects the lockdowns have on people? People who didn’t have health issues have started to acquire them because of that lack of human contact.

“People get depressed, it makes me angry. I could accept it at the beginning, old people dying, but now it’s time common sense prevailed. I’m so sorry for people who have lost years of their lives, old people unable to see grandchildren etc. We need a new broom someone with a brain and some nous.”

Bruce, who lives in London, spent the first lockdown in Paris with girlfriend Leana Dolci. “I spent three months sitting on a balcony writing stuff about military history which might turn into something.”

He’d moved to France three years ago after his split with second wife Paddy, mother of his three grown-up children, who died last year in a tragic accident.

Iron Maiden have got a sold-out European tour to play “as soon as the government work out how to get us visas,” he says.

“Every tour and album are an adventure. I’ve been writing stuff for Iron Maiden which I can’t tell you about but I will be able to talk about it at the one-man show. It’s exciting!

“What we’ve done will really rock your world…”

An Evening with Bruce Dickinson tours next month. Tickets available now on Ticketmaster.