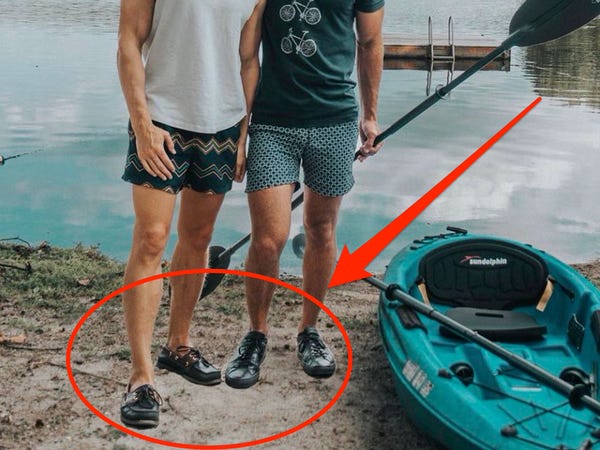 A Broadway actor, writer, and director explained on social media why he had manipulated a photo after facing backlash for what appeared to be an obvious photo edit.

Andrew Keenan-Bolger, who goes by the handle @keenanblogger on both Instagram and Twitter, recently posted a Twitter thread about how and why he had edited a photo that was circulating in a viral tweet, demystifying the process and explaining that he edits photos "all the time."

The photo, originally posted on Keenan-Bolger's Instagram account (although it appears to have since been deleted), was reposted to Twitter by user @boy____troy, who tweeted the photo with a simple "??" caption. It zoomed in on the couple's feet and amassed nearly 160,000 likes. In the comments, others scrutinized aspects of the photo that appeared to demonstrate that it had been edited.

"Welp, I'm getting dragged for photoshopping myself 'onto a beach' in my most recent picture, which is… silly," Keenan-Bolger wrote on Twitter, saying that he had done a "bit of a rush job" editing the photo because he was hosting a phone bank right after doing so.

In the thread, he said that the hadn't photoshopped himself and his husband onto the beach itself, but had rather superimposed a backlit photo over a different test shot that featured a background, something that he said that he does a lot.

"I hate to break it to ya, but I use Photoshop ALL THE TIME," he wrote in the Twitter thread, highlighting other examples of photos he had posted that he had edited to create impossible shots like one in which he is both holding a mirror and reflected within it.

"Photoshop's an awesome tool for digital artists and I'm always impressed by the creative ways people can use it," Keenan-Bolger wrote in the thread. "I've seen some incredible ingenuity with people's photography, particularly when we're all cooped up inside and unable to travel or hang in groups."

Bolger did not address another photo that some users suggested included the photo of an edited chicken.

Poultry in motion 🐔 We are on the tiny island of Terre-de-Haut, a French island on the archipelago of Guadeloupe. It’s insanely gorgeous here with bright colored houses, lush tropical vegetation, untouched pristine beaches, oh…and did I mention chickens? So. Many. Chickens. #SeabournPartner #extraordinaryworlds

People online are typically quick to call out what they perceive to be photo editing mishaps, and are particularly unforgiving the bigger the celebrity. For public figures like the Kardashians and Jenners, people are more than willing to call out posts that they perceive to be edited. The same standard, in many ways, also applies to influencers, who may face a deluge of criticism if someone calls them out for editing a photo.

Keenan-Bolger's thread demystifies some of the reasons why influencers may edit their photos, while also calling his the trolls. His husband, Daily Beast writer Scott Bixby, was doxxed earlier this year after publishing a story regarding a Bernie Sanders' staffer's private Twitter, in which he made derogatory tweets about other candidates. Since then, the couple has faced increased scrutiny online.

"So for all the new followers who are just here to troll me, welcome! I promise to provide you with a steady stream of photos to make fun of," Keenan-Bolger wrote in the thread.