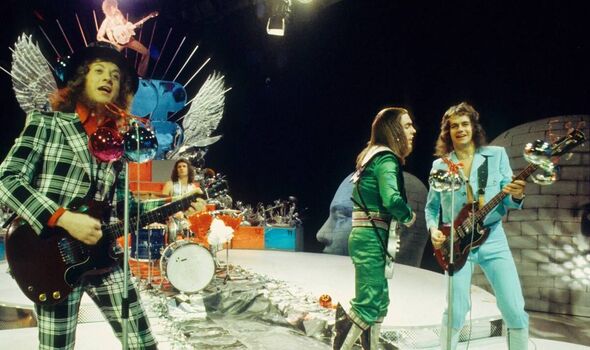 On Christmas Day, the Queen makes her first speech to the Commonwealth – the first of 69 December 25 addresses over the course of her long, historic reign. But while Her Majesty was busy making history, another tradition had been born.

At number one in the pop charts is the Italian-American crooner Al Martino, with the song Here In My Heart.

The ballad is not just the first Christmas number one but the first chart-topper of all time as the official “hit parade” only began in November.

Today, with downloads and streaming having replaced sales of seven-inch singles, the number one slot is arguably less prestigious.

But there is still great kudos for claiming the slot, especially at Christmas.

The importance and influence of the Christmas number one grew during the rock’n’roll era and it became a big thing to top the charts in the last week of December.

Over the years that followed, getting to the top at Christmas became even more prestigious.

There were tremendous battles between some of the biggest names in the business to claim the coveted slot at the time of the year when record sales were at their highest.

Some iconic songs have been crowned festive number one, from Queen’s Bohemian Rhapsody to Don’t You Want Me, by the Human League.

There have also been some heartwarming number ones, such as the Justice Collective, a group that raised funds for charities associated with the Hillsborough disaster, whose rendition of He Ain’t Heavy, He’s My Brother hit top spot in 2012.

In 1984, Band Aid topped the Christmas chart with Do They Know It’s Christmas?, subsequently returning to the slot twice.

Tinsel all the way: The Most Christmassy HITS

Seven number ones since 1952 have had the “C” word in their title, but many more have had a festive theme. Perhaps the most popular Christmas number one of all time is Merry Xmas Everybody by Slade, which sold a million copies on its original release in 1973 and which has been re-released in every subsequent decade.

Ironically the song – never off the airwaves at this time of year – was recorded in a summer heatwave during the band’s US tour.

“I think people wanted something to cheer them up – and so did I. That’s why I came up with the line, ‘Look to the future now, It’s only just begun’,” recalled Slade’s Noddy Holder.

“Once I got the line. ‘Does your granny always tell you that the old ones are the best’, I knew I’d got a right cracker on my hands.”

Cliff Richard is another artist closely associated with this time of the year.

He topped the charts at Christmas with I Love You, with The Shadows in 1960, and twice as a solo artist, with Mistletoe And Wine in 1988, and Saviour’s Day two years later.

This year he will be hoping to claim his fourth festive chart-topper with new single Heart Of Christmas.

The definitive golden age of truly classic Christmas number ones was the mid-1970s. In four of the six years between 1973 and 1978, tunes with a festive theme made it to the top.

After Merry Xmas Everybody in 1973, came Lonely This Christmas by Mud in 1974, When A Child Is Born by Johnny Matthis in 1976, and Mary’s Boy Child by Boney M in 1978 (the second time the song about the baby Jesus had made it to the top at Christmas, having also been a number one for Harry Belafonte in 1957).

Another enduring Christmas chart-topper was Merry Christmas Everyone by Shakin’ Stevens, a number one in 1985 and which re-entered the top 10 in both 2019 and 2020.

Is this just fantasy?

A number of tracks that have absolutely nothing to do with Christmas topped the charts on December 25 and have since become standards.

The epic, six-minute Bohemian Rhapsody by Queen was number one for nine weeks between November 1975 and January 1976, and returned to the Yuletide pole-position 16 years later, when it was re-released after singer Freddie Mercury’s death.

Other classics to be number one at Christmas were Don’t You Want Me by The Human League in 1981, and The Pet Shop Boys’ cover of Always On My Mind, in 1987.

The Christmas charts wouldn’t be the same without novelty records, a tradition stretching back to the late 1960s.

In 1971, comedian Benny Hill made it to the top of the musical Christmas tree with his stirring tale of Ernie, The Fastest Milkman In The West, which former Prime Minister David Cameron later revealed to be the only song he could sing in full.

In 1993, Mr Blobby, one of the stars of Noel Edmonds’ House Party, claimed the top slot, while seven years later it was the turn of the animated children’s television character Bob the Builder with We Can Fix It.

Dad’s Army star Clive Dunn was at number six at Christmas 1970 with Grandad, but the man who played Lance-Corporal Jones didn’t have to panic as he did claim the number one position early in the New Year.

Two of the most unusual festive chart-toppers were Lily The Pink by Liverpool comedy group The Scaffold in 1968, and Save Your Love, by the serenading duo Renee and Renato, in 1982.

No Snow in Sight: The Very Un-Christmassy Number Ones

In 1979, progressive rock group Pink Floyd’s grim and chilling, but musically brilliant, Another Brick In The Wall (Part Two) – with its famous children’s chorus of “We Don’t Need No Education” – held off the much more seasonal I Have A Dream, by Abba.

Four years later, acappella group The Flying Pickets had a surprise Christmas number one with Only You.

It was not intended as a Yuletide hit but the Pickets did enter into the spirit of the season by dressing up as snowmen for their Top of the Pops appearance.

In 2009 American rock band Rage Against the Machine with the very unfestive Killing In The Name – a song first released in 1992 – claimed the top spot after an online campaign to stop another single from TV talent show The X-Factor getting to number one for the fifth year running.

What started as a small social media campaign to get the US rockers to number one turned into a nationwide movement.

Simon Cowell called it “stupid” and “cynical”, but the public loved it, helping to shift more than half a million copies of the protest song.

Normal service was resumed a year later when X Factor winner Matt Cardle took the slot back for reality TV.

The Spice Girls had three Christmas number ones in a row in the late 1990s, but they couldn’t quite match The Beatles who bagged the number one slot four times in the 1960s – with non-festive numbers.

However the Fab Four’s own achievement was equalled in 2021 by husband-and-wife YouTubers LadBaby (Mark and Roxanne Hall), who registered their fourth consecutive Christmas number one, each one raising money for the food bank charity the Trussell Trust.

Their 2021 chart-topper Sausage Rolls For Everyone also featured Ed Sheeran and Elton John.

This year they’ve recruited Money Saving expert Martin Lewis for a rewritten version of Do They Know It’s Christmas? So will this year be their fifth number one in a row?

Doing it for Charity

The ultimate Christmas number one good cause fundraiser was Band Aid’s Do They Know It’s Christmas?, first released in 1984 to raise money for anti-famine efforts in Ethiopia, and then re-released with different line-ups of pop stars in 1989 and 2004.

The original single sold a million copies in its first week, making it the fastest-seller in UK chart history up to that time.

Other charity songs to make it to the top for Christmas Day include Wherever You Are by Military Wives with Gareth Malone in 2011, He Ain’t Heavy, He’s My Brother, by The Justice Collective in 2012 and A Bridge Over You, by the Lewisham and Greenwich NHS Choir which raised money for a number of health causes.

From 2005 to 2014, winners of the X-Factor bagged the coveted Christmas number one position seven times, including four times in a row between 2005 and 2008.

These included Hallelujah by Alexandra Burke in 2008, and Shayne Ward’s That’s My Goal in 2005, which sold more than 300,000 copies in two days. The last X-Factor Christmas chart-topper was Something I Need by Ben Haenow in 2014.

The stars at the top of the Christmas Tree

Some of the biggest names in popular music have been number one at Christmas including Elvis Presley, with Return To Sender in 1963, Whitney Houston with I Will Always Love You in 1992 and Tom Jones with the Green, Green Grass Of Home in 1966.

But superstars who never quite made it include David Bowie, whose mash-up duet with Bing Crosby “Peace On Earth-Little Drummer Boy”, could only make number 3 in 1982, and Abba, who peaked at number 2 in 1979.

The songs that just missed out

Surprisingly, some classic Christmas hits didn’t quite make it to number one, or at least not at the first time of asking.

The perennial favourite Last Christmas by Wham! had the bad luck to be up against Band Aid in 1984 – which also featured George Michael – but finally made it to the top of the charts 36 years later, in January 2021.

Wizzard’s I Wish It Could be Christmas Everyday, which you can’t go into a shop without hearing in December, only reached number four in 1973, while Jona Lewie’s anti-war song, Stop The Cavalry, was up against the late John Lennon’s Starting Over and the St Winifred’s Choir, There’s No One Quite Like Grandma, in 1980 and only made it to number three.

In 1994, Mariah Carey‘s All I Want for Christmas Is You, was thwarted by East 17’s Stay Another Day, but did finally get to number one in the week leading up to Christmas 2020.