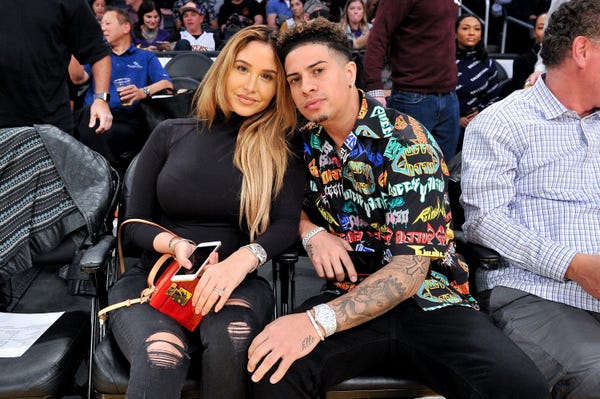 A shocking clip in an otherwise normal family vlog is causing concern among fans of the McBrooms, whose YouTube channel The ACE Family has more than 19 million subscribers.

Austin and Catherine McBroom are parents to 4-year-old Elle, 2-year-old Alaïa, and 3-month-old Steel. They first started posting videos in 2016 and have quickly become one of the most popular families on the internet. Millions of young fans watch their daily lives play out on YouTube and TikTok. Austin and Catherine have also been at the center of several controversies, including speculation that they've faked dramatic content for views.

On October 15, a new vlog about a "day in the life" of Catherine was uploaded to The ACE Family's channel. At the beginning, a clip showed Austin briefly yelling and cursing at Catherine before the two of them and their daughters filmed their upbeat video introduction.

The clip of Austin yelling has since been removed from the video, but a concerned fan recorded it and posted it on TikTok, where it had more than 2.4 million views at the time of this article's publication. Besides the uncharacteristic, tense nature of the interaction, it also includes a swear word that the ACE Family would never typically include in one of their family-focused videos.

In the since-removed clip, Austin appears to start rehearsing saying "What's going on everybody" for the video's introduction, then he interrupts himself to say "Look at my hair, good thing I don't have to—" Catherine cuts him off to say "No," and Austin says, "No, I'm going to say it. 'Good thing I don't have to be on camera today.'" Catherine says "OK," and Austin yells "God, My hair looks f—ed up, I'm not feeling it like this, so just go."

Catherine then counts down from three and records the family's usual introduction while Austin holds Alaïa and Steel.

Catherine also addressed the clip on Twitter, writing "And yes Austin and I get frustrated with each other sometimes it's called marriage […] I wish ppl would stop expecting ppl to have a 'Perfect' life it's just not realistic!"

Austin replied to Catherine's tweet, writing "No relationship is perfect, but the love @CatherinePaiz and I have for each other makes up for all of the small imperfections."

On TikTok, the viral clip is captioned "I know this man did not talk to her like that." The top comments express concern for Catherine, with one comment with more than 35,000 likes saying "She looks so unhappy in this."

Austin has been criticized by fans several times over just the past year. In December 2019, he suggested that fans should have to pay to watch ACE Family videos — an unpopular remark, given that the McBroom family had just moved into a $10 million California home with their YouTube earnings.

"Still waiting for Austin to be cancelled and Catherine to make her own YouTube channel without him," says another top comment on the TikTok with more than 24,000 likes.