A woman who discovered her husband has been having an affair for four years, has been urged to tell her family the truth about their separation instead of pretending that it was a mutual decision.

The UK-based mother-of-two took to Mumsnet, to ask for advice on telling her friends and family about her decision to separate from her husband and father of her children.

She explained that they’ve been together for 11 years, and have two children under two, including a nine-week-old baby, but she’s discovered he’s been cheating on her for the past four years.

Explaining that her loved ones will be devastated and will struggle to be around him, she fears that she will ultimately lose out because they will have to share special occasions such as their children’s birthdays between them, instead of gathering as a family.

However, a stream of users said that he doesn’t deserve her protection and that she shouldn’t have to lie for him. 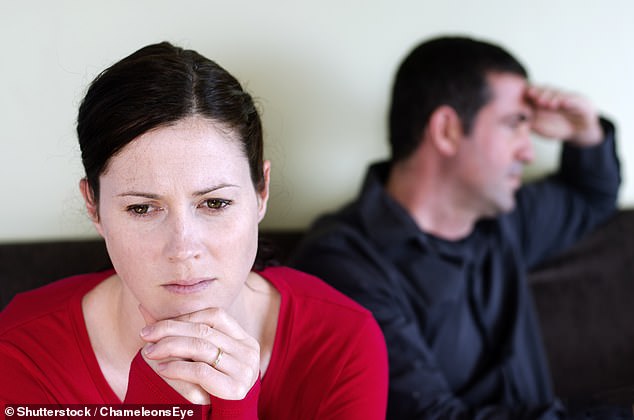 A woman who lives in the UK, sparked a debate about telling friends and family about the reasons for ending a marriage (file image)

Explaining the devastating situation, she explained that she’s spent some time getting her ‘ducks in a row’ and is now ready to separate, but doesn’t know how to handle telling her loved ones.

She asked: ‘Do I  tell family the truth of what he has done (we are really close to my family, I know they’ll be completely devastated, and angry!), and accept that Christmas, Birthdays, Celebrations etc for our daughters will be I suppose, shared?

‘Which completely breaks my heart as I feel I’ll be losing out/being punished for these occasions without my kids because of his actions.’

Her other option is to ‘tell everyone it was a mutual decision to separate, in order to keep some peace so he can still visit/attend celebrations/Xmas morning etc?

‘Although I will feel I’m letting everyone down, as I’ve literally just had a baby 9 weeks ago and now I’m considering telling my family that this was a joint decision?!

‘Please tell me if I’m crazy to be asking this, I just never in a million years thought this would happen and I’m so done with it all and tired and emotional and just want someone to pour my heart out to. I just can’t stand the thought of it all. Please give me all your advice.’ 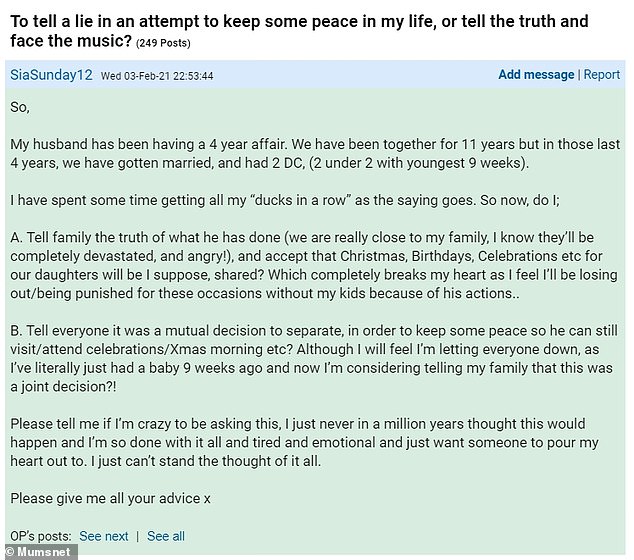 Posting anonymously on Mumsnet, the woman explained she has been with her husband for 11 years, however he has been having an affair for the past four

A stream of responses pleaded with the mother to be honest about the separation and seek support from her family.

One person wrote: ‘Tell the truth. Please don’t fill your head up with s*** you don;t need to remember and deal with. You are showing your children an excellent example of being strong and respecting yourself. It is hard thought.’

Speaking from experience, another said: ‘Tell the truth. I kept it hidden for awhile, but the strain nearly killed me. You do not have to cover up his deceit. Your family will support you and do whatever you want them to.

‘I think you are being too forward thinking. Somehow, I cant imagine that you will actually want him at any family events. He can make his own plans. Sorry this has happened to you and with such young kids. Look after yourself and get the best financial settlement you can.’ 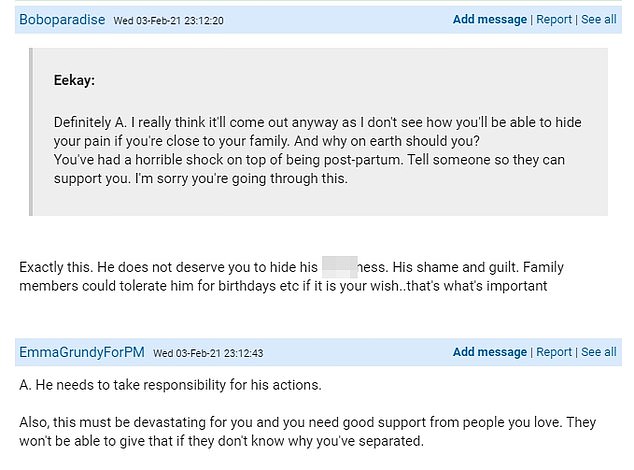 However, others reassured the woman she doesn’t have to tell her family the truth if it isn’t going to help her through the situation.

‘Do what you need right now. If you need peace right now, take the peace. Maybe you’ll want to tell your family the truth down the line when you’re in a better place. Or maybe you’ll find you need their support now when you split up. Do what is right for you, right now,’ one wrote.

Another said: ‘You don’t have to tell everybody, everything all at once. The simple basic facts are sufficient. Beware getting embroiled in other people’s stuff.’

A third added: ‘I don’t see why it can’t be both. Tell everyone honestly why you’ve separated (because why should he come out of this looking good?) but then it’s up to you whether to involve him in celebrations etc.

‘I think if you don’t tell everyone, you’ll resent it later when he’s hailed as a great dad etc for always being around, and you’ll know in your mind what he did.’

Others argued the woman shouldn’t tell her family about the reasons behind her separation, unless it will help her right now