On Tuesday’s episode, Gina decided to make a victim impact statement in court.

Gina Kirschenheiter decided to take a stand against her ex-husband Matt on “Real Housewives of Orange County.”

Matt was arrested in 2019 and charged with domestic violence and false imprisonment, following an argument in which he allegedly choked and threatened to kill Kirschenheiter. He has denied all the charges and pled not guilty.

On Wednesday’s episode, Gina met with her lawyer to talk about her DUI case, when talk shifted to Matt. Her lawyer asked Kirschenheiter if she would like to make a victim impact statement in court, a decision which left Gina with some unease. 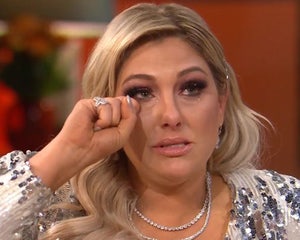 “It feels like it was all a long time ago and where we are now, we’re co-parenting so well. It’s hard to stand up to him,” she told her lawyer.

In a confessional, however, she said that “what happened that night, I struggle with it to this day. I still wake up in the middle of the night, I have bad dreams.”

She added that she wanted to give a statement because she felt, in the back of her mind, that it would be “good and healthy” for her to do. “But, I don’t know if I can.”

Later, she spoke with a few of her costars about the position she found herself in.

“It’s really shitty and I’m trying my best to pretend it’s okay and we’re going to coparent and we’re great,” she told them. “And we are to a certain extent.”

Telling them she had invited Matt to her home to celebrate their daughter Sienna’s birthday together, she got very emotional as she said she’ll have to “put a smile on my face” to look like a happy family for their children.

While viewers saw Gina and Matt remaining civil when he came to her house with his girlfriend, Kirschenheiter explained in a confessional she had made a decision about speaking out in court.

“I spent a lot of time just burying my feelings about a lot of things and it’s not right, so I decided to make a victim impact statement,” she said. “I at least want him to have to hear how I felt about that night because it is literally the most significant event that’s ever happened to me in my entire life.”

“It’s hard because my desire to make everything happy for my kids is always taking precedent to my own feelings, but I’m hoping that if he hears it, it will affect him in a way that will effect change,” she added.

With the charges against Matt coming with time behind bars should he be convicted, Gina said him going to jail “would be horrible” for their children.

“Knowing that this may be the last birthday that Sienna will get to spend with her father for a while, it’s sad,” she explained. “I don’t want that for my daughter and I don’t want to be the person responsible for that and I have a lot of guilt about that.”

“What’s going on, it’s heartbreaking, but I think it will be very beneficial for my children to see that I will stick up for myself and I’m not just gonna let Matt brush this off,” she added. “Somebody is always swooping in to save him and I just really feel like he needs to know that I’m not that person anymore.”

According to Us Magazine, the next hearing for Matt’s domestic violence case is scheduled for January 2021.

“These are just allegations brought by the DA, it’s not evidence of a crime, Matt maintains his innocence,” Matt’s attorney told E! when he pled not guilty. “He denies the allegations. He’s a fantastic father and a family man. His motivations have always been his family and his kids. Whatever happened was an unfortunate event.”

“It’s unfortunate that there are 3 kids involved, but Matt’s priority remains his 3 children,” he added. “Matt is not a risk to his kids, he’s not a risk to Gina. He has never been violent in the past, he doesn’t have any violent history. He is a good father, even Gina has said that publicly. He’s looking forward to his day in court, and having the truth come out and the opportunity to clear his name.”