Home » Lifestyle » What Happened To Queen Elizabeths Tiara On Her Wedding Day? 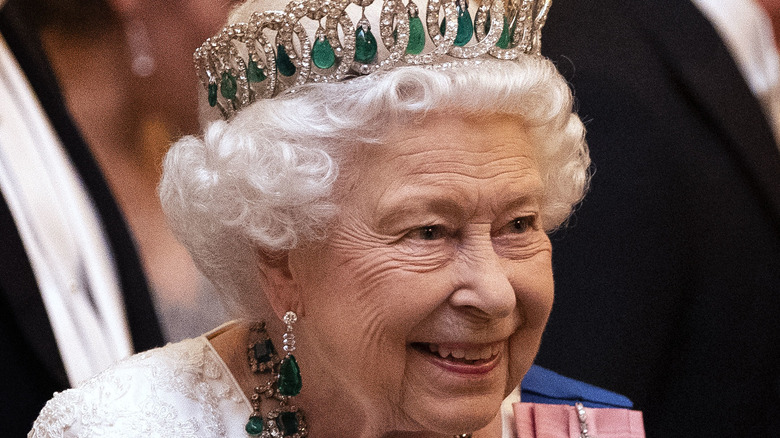 Wedding days are huge for everyone involved. From the bride and groom down to the guests, everyone is building up to the special day, trying on outfits and making plans, not to mention preparing for the hustle and bustle of the actual wedding day. And that’s a “normal” wedding. So you can imagine the meticulous planning that goes into organizing one of the world’s most public weddings. With an estimated audience of 200 million (via Hello!), Queen Elizabeth’s wedding to Prince Philip in 1947 was one of the most watched around the world.

The young princess had chosen her special day as the first time she would wear a tiara (via Hello!). The tiara in question was the Queen Mary’s Fringe Tiara, originally owned by Elizabeth’s grandmother, Queen Mary who had given it to Elizabeth’s mother, the Queen Mother (via Tatler).

The tiara had originally been a tapered fringe necklace, given to Queen Mary by Queen Victoria on her wedding day, which she then wore in her hair. As was the case with a lot of Queen Mary’s jewelry, she asked royal jewelers Garrard to adapt the piece into a kokoshnik-style tiara — a taller-style tiara based on Russian headdresses (via Town & Country).

Garrard created the kokoshnik-style Fringe Tiara with the necklace’s original 47 graduated brilliant and rose-cut diamonds, and separated them with 46 narrow jewels, which could be removed when not attached to the tiara frame, and would allow Queen Mary to still wear the piece as a necklace (via Tatler). 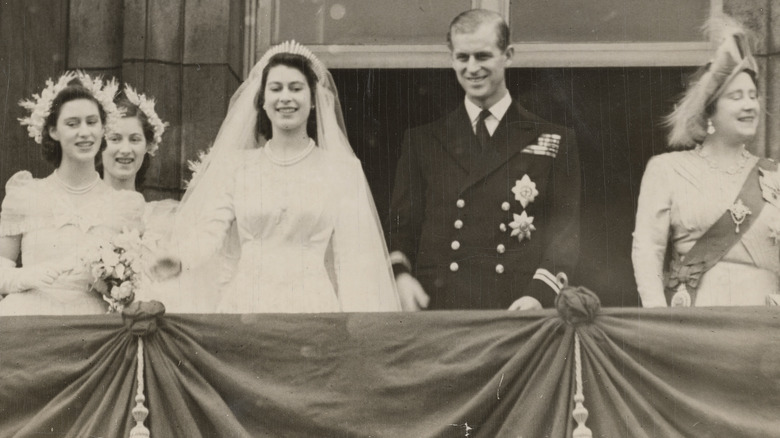 With the stage set for her big day, Queen Elizabeth was getting ready on the morning of her wedding to Philip Mountbatten, and the then-princess suffered a wardrobe malfunction of sorts. She revealed to Kate Middleton, Duchess of Cambridge, in 2018 while viewing the exhibition that displayed the duchess’ 2011 wedding dress that things had gone awry (via Tatler). Unaware that the tiara was once a necklace, the queen accidentally broke the tiara by touching the clasp. “The catch, which I didn’t know existed, it suddenly went,” she said, via Hello!. “And I didn’t know it was a necklace, you see … I thought I’d broken it … We stuck it all together again, but I was rather alarmed.”

You can imagine the chaos. The Queen Mother, who lent the princess the tiara from her personal collection (it had been handed down from her mother-in-law, Queen Mary) as her “something borrowed,” calmly said, “We have two hours and there are other tiaras.” But Elizabeth was adamant this was the tiara she wanted to wear on her special day (via Tatler).

Luckily the royal jewelers, Garrard, were on hand to mend the broken tiara, taken via police escort to the workshop and returned just in time (via Hello!). “I think he taped up the spring,” Elizabeth recalled. Whatever he did, all was well for the big wedding celebration, and the tiara is still a part of the queen’s collection today.

Although she rarely wears a tiara these days, Elizabeth will bring one out for state occasions, like at a banquet held for the President of Mexico in 2015. In keeping with tradition, the queen has also lent the Queen Mary Fringe Tiara to her only daughter, Princess Anne, to wear on her wedding day in 1973. Most recently, the queen’s granddaughter, Princess Beatrice, wore the tiara at her wedding to Edoardo Mapelli Mozzi in July 2020 (via Tatler).