The federal government has split the electorate over its sweeping plan to allow unions to pursue common pay deals across industries, with 32 per cent of voters against a mandatory scheme while only 26 per cent are in favour.

The exclusive findings highlight the risk for Prime Minister Anthony Albanese in overhauling the industrial relations law to empower unions with the “multi-employer bargaining” regime being resisted by peak industry groups.

But Labor has held its powerful lead in core political support after the federal budget and kept its edge on economic issues despite a gain in the Coalition’s primary vote from 30 to 32 per cent.

The exclusive findings in the latest Resolve Political Monitor, conducted for this masthead by research company Resolve Strategic, show Labor has a primary vote of 39 per cent, unchanged for three surveys in a row. Albanese has also retained his edge over Opposition Leader Peter Dutton to lead by 53 to 19 per cent as preferred prime minister.

The government is intensifying pressure on Senate crossbenchers to pass its IR bill by December 1 to avoid a lengthy debate that could overlap with the NSW state election next March or increase the chances that the Senate blocks the bill.

While 40 per cent of voters support the idea of allowing unions to negotiate with multiple employers at once, 24 per cent are against and 36 per cent are unsure.

Support falls sharply when voters are asked if the scheme should be mandatory for employers, with only 26 per cent in favour at a time of fierce public debate about the impact on wages and the risk of industrial action.

The RPM findings also show 29 per cent of voters would prefer to see higher wages even if it leads to higher prices, while another 29 per cent prefer lower prices even if this means lower wages.

Employment and Workplace Relations Minister Tony Burke introduced the industrial relations bill last week with a vow to fix the enterprise bargaining system after a decade of falling real wages, saying it would lead to better pay deals for industries such as childcare and aged care with a high proportion of female workers.

But the government is struggling to gain the numbers in the Senate because crossbenchers David Pocock and Jacqui Lambie want more time to debate the complex changes, while peak industry groups are trying to stop rules that would make it compulsory for employers to submit to deals.

“If enacted, this legislation would drag multiple employers to bargain against their wishes,” Australian Chamber of Commerce and Industry chief Andrew McKellar said.

While Pocock suggested on Monday the bill could be split to allow more time for the most complex sections, Burke said he was “deeply reluctant” to do this.

“People have had their wages deliberately held back for 10 years and with inflation moving at its current rate, I don’t see how I can deliberately hold back parts of legislation that seek to get wages moving again,” he said.

Burke also argued in a private meeting with crossbenchers last Thursday that workers had been waiting for pay rises for many years and needed the law in place as soon as possible, according to people aware of the talks who spoke on the condition they not be named. 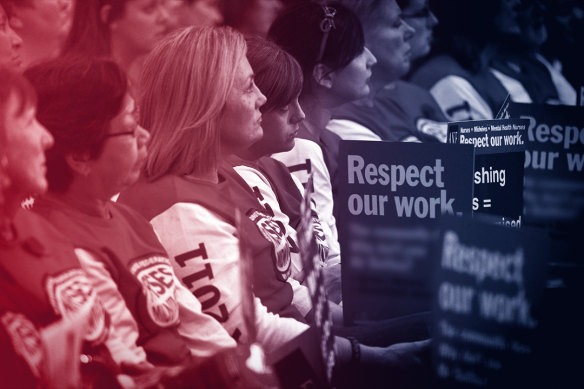 The government says its IR bill would lead to better pay deals for industries with a high proportion of female workers.Credit:Artists

ACTU secretary Sally McManus issued the call for multi-employer bargaining in August and the government included the scheme in a draft law put to parliament last week in the hope it could get it through the Senate by December 1.

The response from voters is sharply divided along party lines but highlights a level of doubt among Labor supporters about the changes, with 57 per cent in favour of the general idea of multi-employer bargaining but 9 per cent against and 34 per cent unsure.

Among Coalition voters, in contrast, 13 per cent support the idea of multi-employer bargaining while 51 per cent are against and 36 per cent are unsure.

Support among Labor voters falls when they are asked about a mandatory scheme for employers to join multi-employer bargains, with only 36 per cent in favour while 20 per cent are against and 43 per cent unsure.

“It’s a lukewarm reception and, as you’d expect with industrial relations, there is a partisan difference when we break the results down by voting blocs,” Resolve director Jim Reed said.

“Industrial relations is often judged on choice and fairness, so when you make it mandatory for employers, more people have a problem with it.

“A result where only 26 per cent support a policy is a bit dire. It’s not a great starting point for the government, especially if business groups start to campaign against it in earnest.”

The Resolve Political Monitor surveyed 1611 eligible voters from Wednesday to Sunday, when debate was dominated by the reaction to the federal budget including its forecasts that wages would not rise in real terms until 2024.

The opening question on workplace law said the federal government was about to introduce new laws that were likely to allow unions to negotiate agreements over multiple employers at once, rather than one at a time. It added: “Unions have pushed for this change as they say it will increase wages across industries, but business groups have warned that this would lead to strikes, higher costs and job losses. Do you support or oppose allowing unions to negotiate with multiple employers at once?”

The second question asked: “And would you support or oppose this type of multi-employer bargaining if taking part was mandatory, that is, all businesses in an industry were forced to take part in a single negotiation?”

Unions and employers have been at odds over the cost of the workplace changes, with the ACTU predicting higher wages while ACCI and others have forecast higher costs that could force companies to cut jobs.

The survey asked: “The ACTU says that multi-employer agreements could help secure higher wages in many sectors, including personal services, healthcare, retail and hospitality. Business groups have warned that the outcome of this is that prices would need to be put up to cover the wage rises. If you had to choose, which would be your preference?”