Singer Lisa Marie Presley, who died at 54 on Friday morning, appeared to be unsteady on her feet during an interview at the Golden Globe awards on Tuesday, just three days before her untimely death.

Presley was speaking to the host of the entertainment TV program Extra, Billy Bush, at the awards ceremony, where she was celebrating Austin Butler’s nomination for best actor in a motion picture (drama) for his role in Elvis, the biopic of her father. At the beginning of the interview, Presley held on to the arm of her friend, talent manager Jerry Schilling, who was attending with her. 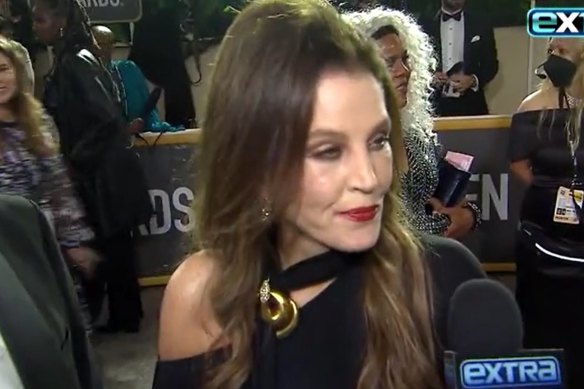 Lisa Marie Presley being interviewed by Extra on the red carpet at the Golden Globes. She appeared to slur her words and was unsteady on her feet.Credit:Extra

She spoke slowly and carefully as she told Bush of her amazement at the way Butler performed the role of her father so accurately in the film.

“I was mindblown, truly,” she said of his performance.

“I actually had to take, like, five days to process it.”

She said the star had nailed the “characteristics [and] the talking without doing it like in a caricature way like it’s been done in the past”.

Butler acknowledged Presley in his acceptance speech for the award.

“I also want to thank our incredible producers, and Warner Brothers, and Presley family. Thank you guys, thank you for opening your hearts, your memories, your home to me,” Butler said.

Her appearance on the Red Carpet was the last public sighting of the singer before her death on Friday.

The 54-year-old was in the intensive care unit on life support with a temporary pacemaker, and placed in an induced coma, before she passed away.

Emergency medical technicians reportedly performed CPR at her home in Calabasas, California, and paramedics were able to regain a pulse before Presley was taken to hospital, TMZ reported.

Presley released three albums during her life: her debut album To Whom It May Concern reached number five on the Billboard 200 albums chart in 2003.

She was the mother of four children, including actress Riley Keough who was in the 2015 hit Mad Max: Fury Road, directed by Australian George Miller. Her son Benjamin Keough died by suicide in 2020.

Crisis support is available from Lifeline on 13 11 14.