The Tender Bar is a memoir by J.R. Moehringer about his coming of age in Manhasset, Long Island, just outside New York City, in the 1970s and ’80s. George Clooney has adapted it with a script by William Monahan, who wrote The Departed, so you know you’re in good hands. 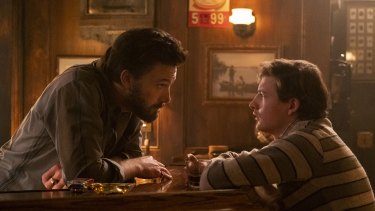 Ben Affleck and Tye Sheridan in The Tender Bar: you’re in good handsCredit:

The film starts with Radar Love and ends with Steely Dan’s Do It Again and there must be another hundred songs along the way. It’s like listening to the best classic rock radio station ever put together – which is apt, because JR, the 11-year-old boy at the centre of the story, only knows his father as a DJ on the radio. The father skipped out when he was little and never pays maintenance. Uncle Charlie (Ben Affleck) is the only father figure JR has because he can’t really count his grandfather (Christopher Lloyd) who’s crazy as a loon.

Much of the film is set in the grandfather’s house – which teems with JR’s cousins. He likes that they had to move back here after his mother could not make ends meet. ‘It’s people. I like to have people’. His mother (Lily Rabe) hates the sense of failure: her son is going to Yale or Harvard to become a lawyer. She drums it into him.

The boy grows up surrounded by love and craziness. Clooney gives it a warm glow that rattles along with good dialogue in broad working class “Noo Yawk” accents. Affleck is in his element here as Charlie, proprietor of the Dickens Bar, a neighbourhood joint with 500 books behind the bar. Charlie schools the boy in ‘male sciences’ – always control your drinking, never hit a woman, look after your mother, always have a secret stash in your wallet and never drink it, that sort of thing.

His scenes with the boy are the best thing about the first half of the movie – funny, tender, full of good things to learn. Badabing, and now JR is 18 and applying to Yale, wanting to become a writer. Tye Sheridan is well cast as the older JR but the movie loses the wind from its sails here. Yale, friendship, falling in love – all good material for a story, but Monahan’s script doesn’t knit it all together. “And then, and then …” is not a structure. Clooney begins to use music to paper the cracks and he follows tributaries for too long, like JR’s hopeless love for a girl who doesn’t love him (his Gatsby plot, JR jokes).

The film is an unmitigated pleasure for four-fifths of its length – and that’s more than most offer. It’s affectionate, thoughtful and very funny, with a strong desire to peel back the layers of class division in America – a theme worth exploring. I kept thinking a stiffer edit would have saved it, but Clooney is sometimes like that. When he loves a bunch of characters, for their fleshy humanity and interesting foibles, he can tend to lose his ability to cut deep. I’d still watch it again in a heartbeat.