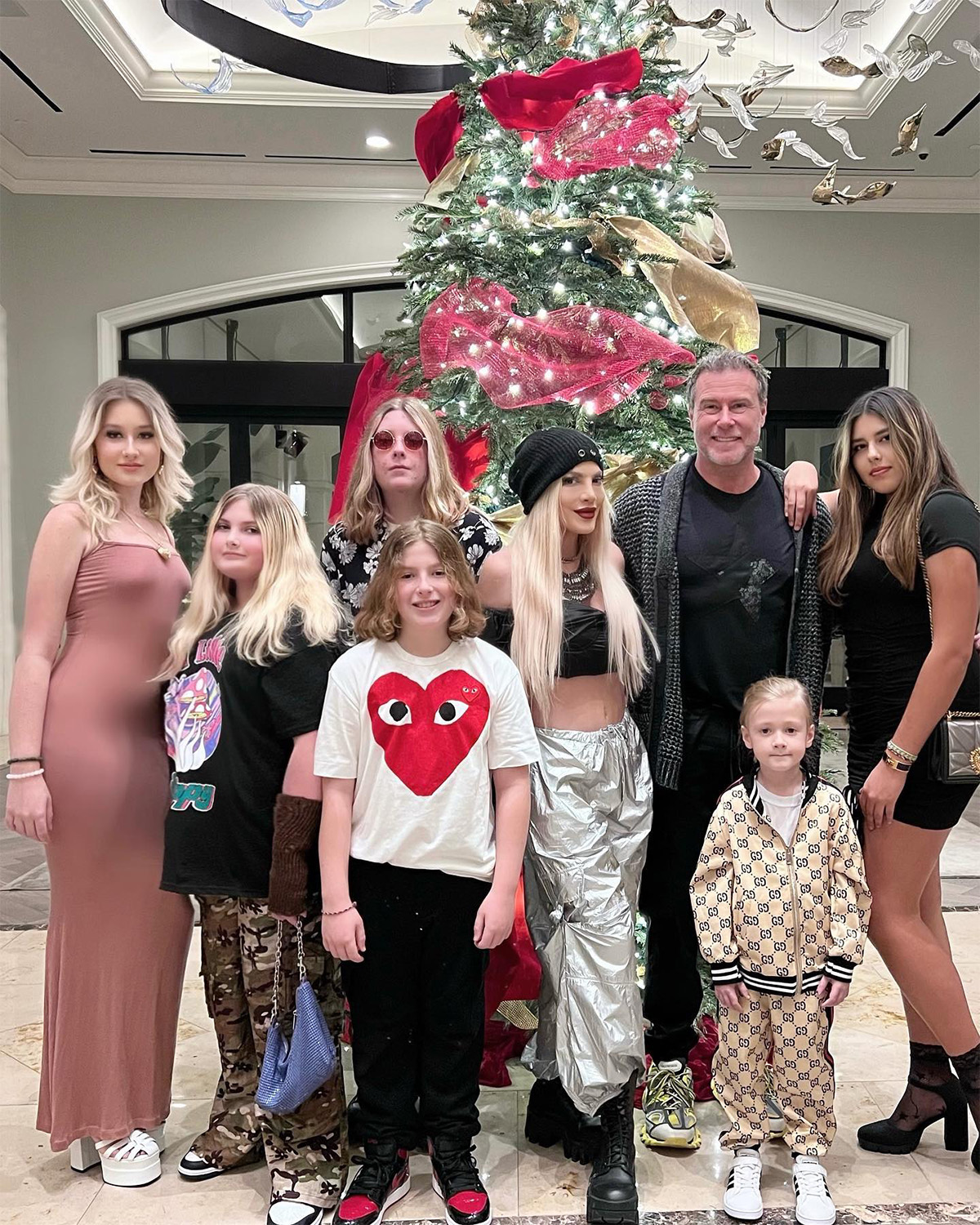 Under one roof. Tori Spelling and Dean McDermott showed off their blended family as they celebrated New Year’s Eve together.

“New Year 2023 ❤️… About last night. Celebrated as a family. Just missing @thejackmonty,” Spelling, 49, captioned an Instagram photo on Monday, January 2, of the group standing in front of a Christmas tree at the Park Hyatt Aviara Resort in San Diego.

The actress was joined by the kids she shares with the 56-year-old actor: sons Liam, 15, Finn, 10, and Beau 5, and daughters Stella, 14, and Hattie, 11. McDermott is also the father of son Jack, 24, whom he shares with ex-wife Mary Jo Eustace. The Divorce Sucks author’s daughter Lola, 17, was also in attendance at the family gathering.

The Beverly Hills, 90210 alum previously confirmed that Eustace’s youngest child, whom she adopted amid her divorce from McDermott, is currently living with them.

“It’s currently the Christmas season and I have seven kids right now. Because we have his ex’s two kids [with us], so one from his [past] marriage, my stepson, and then her daughter living with us,” Spelling told Bethenny Frankel on the “ReWives” podcast in December. “We have a big blended family right now. The more, the merrier!”

Earlier in the month, the family made headlines when Eustace, 60, slammed her ex-husband and his wife. In response, the Slasher alum walked away from his “Ex’s & Uh-Ohs” podcast, which he collaborated on with Eustace.

“Since my parents’ divorce in 2006, I have rarely spoken out as I preferred to stay out of it,” Jack wrote via Instagram at the time. “Unfortunately, due to my mothers recent decision to spread information about my Dad, Step mom and my siblings I am no longer able to stay silent. He chose to leave [the podcast] due to negative comments about our family and consistent attempts to malign his character. He also chose to leave due to the producer of the show betraying his trust and divulging private information.”

Spelling later revealed that the holiday season presented some unexpected challenges when she ended up at the hospital. “Here I am in [the] hospital since late last night,” she wrote via her Instagram Stories ahead of Christmas Day. “To all of you who gas lit me when you were told I [was] too sick to work, well here I am.”

After haters questioned her health scare, the Spelling Like It Is author clapped back, writing, “How about next time [you] take someone at face value and show kindness instead of doubtfulness.”

The Troop Beverly Hills star returned to her home days later. “Hope everyone had a very Merry Christmas. Still very much in the Christmas spirit today,” she captioned an Instagram post. “This morning Beau said, ‘Mom a Christmas miracle happened! The elves moved and it’s the day after Christmas. They always stop at Christmas!’ 🎄♥️.”