WHEN MY son Charlie was five years old, I challenged him to swim a mile in a life vest. We were in Montauk, New York, and he was game.

About a quarter mile into the swim, a woman who was several hundred feet away in her kayak started frantically screaming that she was going to “save” Charlie. I said, “Ma’am, we’re okay. He’s my son.”

Charlie kept swimming, hit the shore, and basked in the triumph.

I’ve busted Charlie’s chops since birth (I once put his Christmas gifts on a mountain, which he then had to hike in footie pajamas to retrieve), but I try to treat all my kids equally.

So back in 2018, I took my four children—Jack, then 12; Charlie, ten; Catherine, nine; and Alex, five—plus a buddy of mine named Mo to Vancouver.

Early one pristine spring morning, we headed out for a ten-mile trek around the Squamish Nation, where we would stay at a cabin later that night.

Five easy miles later, we faced our first omen: A well-coordinated team of men wearing glacier glasses and wielding ice picks told us we had another seven hours to the hut. “You’ll never make it there,” one of them said.

This was alarming, yes, but in all my training I’ve come to realize that people, myself and my kids included, always underestimate the indomitable nature of the human spirit.

The next thing I knew, we were knee-deep in snow. 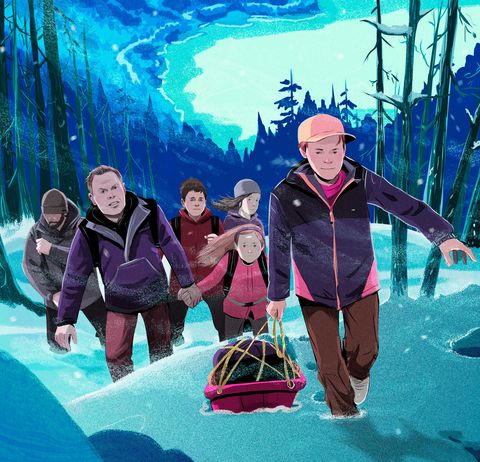 “Where is your jacket?” I asked Alex.

Blizzard-like conditions whooshed in. The sunlight began to weaken. I again heard the hushed voice of the bespectacled trekker like some demented Jiminy Cricket: “You’ll never make it there.”

But then I noticed Charlie. He was pulling a sled filled with gear, without complaint, while everyone else was melting down and whining. Every 100 yards or so, he would stop and eat some snow for hydration. Charlie, calm and collected.

At 2:00 A.M., we reached the cabin, depleted and nearly broken, both as individuals and as a family. Mo, who grew up on the border of India and Pakistan, was the only one unfazed.

Catherine was ready to put the hike behind her. She began to unpack her backpack: a robe, another jacket (the fact that she could have shared this with Alex earlier had escaped her, apparently), a sleeping bag, snacks, and—just to be extra prepared—a teddy bear. We all slept thesleep of conquerors that night.

Twenty-four hours later, riding in the car back home and starving, we stopped for french fries. Immediately, Jack dropped his on the floor of the restaurant. Like a ravenous pack of hyenas, my kids descended on the spoils.

Some people would—and do—call me crazy for these family adventures. But I believe that all of us used to have rites of passage and we no longer do. These rites are critical. They provide reference points in times like these, when the world is turned upside down.

I try to make this fun, and we always suffer together.

In 2019, as a mental challenge, we all memorized Theodore Roosevelt’s iconic “Man in the Arena” speech. Teddy said it best: “ … who at the worst, if he fails, at least fails while daring greatly, so that his place shall never be with those cold and timid souls who neither know victory nor defeat.”

To which I would only add: “Nor what it’s like to eat fries off the floor after almost freezing to death in Canada.”

This article originally appeared in the March 2021 issue of Men’s Health.