Triple J drive show hosts Lewis Hobba and Michael Hing spend their days chatting to folks all over the country. But, through the pandemic especially, it’s rare they get to meet people face to face – and rarer still that they get the opportunity to see those people slathered in olive oil, writhing around on the ground of a medieval fair.

“We got to the end of the past two years and were like, ‘what do we do now that we don’t have to be locked inside this glass box?‘” Hobba says, from inside the Triple J studio.

The answer was Australia’s Best Competition Competition: a new one-hour TV special, filmed over the past year, that takes the pair all around the country in search of our greatest contest. 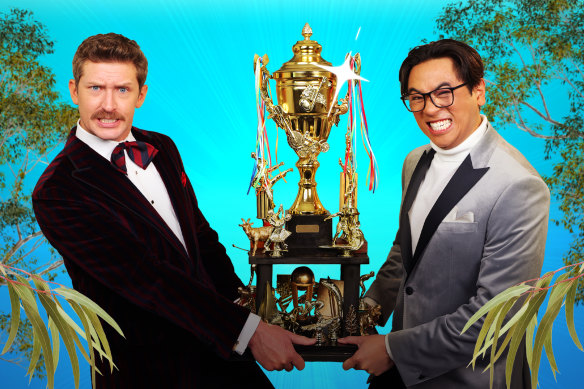 It includes everything from the Archibald Prize in Sydney to the Henley on Todd Regatta in Alice Springs to an all-ages Eisteddfod in Burnie, Tasmania. And it sees the duo try their hands at various skills including drag racing, roller hockey, cross-country skiing and yes, Turkish oil wrestling.

“I think that people will like the fact that Lewis injured himself quite a bit,” Hing says.

In fact, Hobba is still doing rehab after fracturing his knee during one event – and it wasn’t even one of the more physical ones. “Some of the [people we spoke to], even with low expectations, were pretty disappointed in our ability,” he says.

The show, airing on ABC TV Plus (formerly ABC2 and ABC Comedy) and iview this Thursday, is a fun lo-fi experiment from the national broadcaster – and a natural progression from the duo’s radio work, in a similar vein to Hamish and Andy’s Gap Year or Caravan of Courage (Hobba is pre-emptively frustrated the show will get compared to this, but when considering the content and tone it’s hard to avoid).

“Ita Buttrose came to us and said ‘we need someone to save the dying art of television’. Hobba and Hing, are you up to it?” Hing jokes.

In reality, the idea was originally conceived for radio and socials but ruled out because it was too expensive. They were then able to make it work by pitching it to ABC TV, and splitting the costs between that department and Triple J.

“Everyone was really on board,” Hobba says. “And it ticked so many ABC boxes as well.”

That’s easy to see in the finished product. The show features regional locations all around the country, and spotlights a number of ordinary Australians doing odd and extraordinary things. In fact, a few of them often steal the scene.

“It’s a certain kind of person who dedicates their life to Turkish oil wrestling in suburban Brisbane or wants to do a 42km cross-country ski race, right?” Hing says. “They’re bringing a lot of lovable kook energy to the show.”

And, amidst the stunty nature of the comedians trying (and usually failing at) each activity, there’s a very wholesome undercurrent too.

“All of these things bring communities together,” Hobba says. “I would never in my life think ‘I’m gonna run a dry riverbed boat race in the middle of Alice Springs’. Like, to have that idea and then to follow through with that idea – and to do it for really no other purpose than to bring joy to the town… I found that very uplifting.”

The duo would love the opportunity to expand the show into a full series, but they’re hesitant to get their hopes up in the face of ongoing budget constraints and broader difficulties in the TV industry. The ABC, for instance, has come under recent scrutiny (including from this masthead) for its lack of investment in young on-air talent.

“I think there are things in place at the ABC that make it really difficult for good people to try and make cool and interesting stuff.”

Though Hobba points out there are great commissions being made, like Take 5 with Zan Rowe (an older Triple J alum), he says this an issue “across all Australian TV” and perpetuated by all sorts of factors including the fact that young people generally don’t watch terrestrial television and there are no local TV quotas for streaming services.

“The ABC could definitely have more young people on, and I think they should. But there’s also not enough young people anywhere.”

Parts of Hobba and Hing’s new special will be posted on TikTok and YouTube to engage with younger audiences, and they’re also encouraging people to sign up to iview.

“People are like, why would I give you money for a thing that the audience you’re pitching to won’t watch [on TV]?” Hobba says. “So then you go, ‘well maybe they’ll watch it on iview!’ And they’re like, ‘Well, we have very limited broadcast space so maybe we should just make another show about trains that everyone that already watches TV will love’.”