Home » The race card just doesn’t stack up in Australia 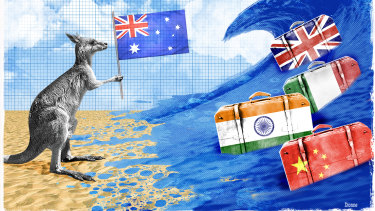 The 720,000-strong Indian community in Australia crossed an important threshold of identity last year. They overtook the Chinese to become our second largest overseas-born community after the English, just as the pandemic forced us to close our borders to the rest of the world.

Scott Morrison will be sweating over every one of those migrants and their local-born families and friends as he tries to walk back his government’s unprecedented threat to jail Australian citizens returning home from COVID-ravaged India.

The Indian community is simply too large and too magnificently welcome in Australia to be played off against the mainstream. The Indians are the single largest group of migrants in the world – 18 million live overseas – and the countries they choose to settle in when the virus is defeated and the free movement of people resumes will be best placed to thrive in the recovery.

Morrison understands all this, even if those spinning on his behalf insist that the Coalition’s vote jumps every time the argument switches to border protection. The politics of border closures are more complicated for the Prime Minister than for the Labor and Liberal state premiers because he doesn’t have the same margin to offend.

When premiers lock out their own people in other states, they can rely on the old colonial rivalries – Victoria v NSW, Queensland v NSW, WA v everyone – to kick in. A federal government with a slim majority anchored in the regions can’t play the same card against one Asian community without risking the ire of voters across all the cosmopolitan capitals.

Morrison has been in politics long enough to remember the cautionary tale of Bennelong, the electorate in Sydney’s inner north-west that John Howard lost along with government in 2007.

A decade of skilled migration and boundary changes had turned the once safe white upper-middle- class Liberal seat into a Eurasian melting pot. “More students, fewer retired citizens and an Asian community with volatile voting habits,” is the way Howard summarised the shift in his memoir Lazarus Rising. At the time, Bennelong had the nation’s second-largest Chinese-born population and was the only Liberal-held seat in the top 20 for non-English speakers (ranked 16th).

Nothing Howard did that year could have stopped Labor’s Kevin07 campaign. But the prime minister’s cause in Bennelong wasn’t helped by the Mohamed Haneef affair. The 27-year-old Indian national, who had worked at a Gold Coast hospital, was arrested at Brisbane airport in July that year and held for 12 days before being charged with providing support to a terrorist organisation. The charges were promptly dropped, but his visa was cancelled before his name was cleared – a decision later found to be unlawful.

The Indian community in Australia back then numbered just 200,000, and in Bennelong represented 2 per cent of the electorate. Labor’s Maxine McKew would have won the seat without them, but she noted the visceral reaction across the electorate when the story broke. “Haneef was one more brick in the wall,” she told me at the time. “People were saying ‘this is not right, this is not how we believe Australia should be’.”

Why does any of this matter now, given that Bennelong has been back in the Liberal tent since 2010 and was retained at the last election with a two-party vote of 56.9 per cent to 43.1? The reason is Bennelong is no longer an ethnic outlier in a sea of Labor. Liberals hold four of the top 20 seats for non-English speakers when you add Reid and Banks in Sydney’s inner west and Chisholm in Melbourne’s east. Lose one and the government loses its majority. Drop all four and Morrison would need to pick up at least two elsewhere to remain in front of Labor in a hung Parliament.

Elections are never that simple, of course. But it is worth drilling this reminder into a PM whose reflex under pressure is to blame-shift and divide.

Race cards might have worked in 1996, when migrants were in the minority and the English-born in Australia still outnumbered the total number of migrants from all Asian countries. But not now. Australia is a majority migrant nation, with almost 51 per cent of the population either born overseas (29.8 per cent on the latest figures for 2020) or with at least one parent born overseas (20.9 per cent). We crossed that threshold in 2018 – which happens to be when Morrison took the Liberal leadership in a party-room coup.

More than one third of all migrants (12.9 per cent of the 29.8 per cent born overseas) are from Asia. While they tend to cluster in safe Labor seats, the sheer size of the Indian wave in recent years will change the ethnic face of virtually every capital city electorate. More than 270,000 people have settled in Australia in the past five years alone, and many will have taken out citizenship and registered to vote. It is worth noting the total number of migrants from England and New Zealand fell over the same period as more people left than arrived between 2015 and 2020. Even the Chinese appear to have reached their high watermark, with a small decrease in their total number last year.

Migrants born in India were already the largest community in Melbourne ahead of the Chinese, and ranked second behind the Chinese in Sydney. When the national census is taken on August 10 this year, it is likely Indians will have passed New Zealanders to be the second-largest community in Perth behind the English-born, and swapped places with the Chinese in Brisbane to be ranked third behind the English and New Zealanders. Morrison will be wary of the shift in Perth and Brisbane in particular because these cities have, until now, defied the trend for the capitals to vote strongly for Labor at federal elections.

Morrison has been playing catch-up all week. By Friday he had announced the policy he should have run with all along, offering to repatriate the 900 most vulnerable Australian citizens and permanent residents stuck in India when the temporary ban on travel ends on May 15. That he didn’t extend the ban beyond that date tells you the politics of border closures was not the vote winner some of the more cynical members of his government thought.

The question now is whether Morrison will be sufficiently chastened by this experience to take his responsibility to govern for all Australians more seriously the next time he faces a difficult decision. Surely even he is tired of the fights he keeps picking, or falling into, with women, with city dwellers – and now with migrants?

Our Morning Edition newsletter is a curated guide to the most important and interesting stories, analysis and insights. Get it delivered to your inbox.