If he and Treasurer Josh Frydenberg did check the mirror, they would see just how much damage, both in terms of dollars and lives, the Delta COVID outbreak dealt the nation.

First and foremost was the human cost. 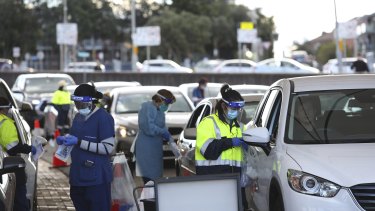 COVID testing at Bondi Beach – while the Delta outbreak from the suburb happened in June, its impact is still being felt today. Credit:James Alcock

Since mid-June, when the “Bondi cluster” was first identified, more than 1000 people have died including 630 in NSW and 511 in Victoria. The number of people seriously infected is far more.

Add in the mental toll imposed on the millions of people forced into lockdown and the human cost of lockdowns outweigh the economic.

On Wednesday, we got an estimate of that financial cost. The economy contracted by 1.9 per cent in the September quarter, a loss of $10 billion in economic output.

It would have been far worse but for government spending (federal and state). That spending included extra expenditure on our health systems and on capital works put in place to keep people employed.

Federal government spending hit a record $51.5 billion while state and local governments lifted their day-to-day expenditure to a record $63.2 billion. All levels of government then spent a combined $28.3 billion on capital works.

Thank goodness for government, for without the economic contraction would have been far worse.

Governments, particularly the Commonwealth, funnelled extra cash out to households and businesses. But with businesses shuttered, they were unable to spend that cash.

More than a quarter of a trillion dollars has been saved by households since the start of the pandemic. It is still there in bank accounts and on mortgage offset accounts, ready to be spent in coming months.

Frydenberg was right on Wednesday when he said there was a damn lot of money sitting there.

And it’s going to have to work damn hard.

GDP per capita – one of the best measures of living standards – fell in the quarter. It is now back to where it was in March 2018.

The resources of all governments in this country have been directed at dealing with the pandemic and its repercussions on human health and the economy.

But as Frydenberg urged on Wednesday, Australia now has to live with the virus.

That is also applicable for a government. All the economic problems evident pre-virus are still out there, easily seen through the front windshield.

Fascinating answers to perplexing questions delivered to your inbox every week. Sign up to get our new Explainer newsletter here.