More than 200 women’s safety services are asking the federal government to commit to concrete actions next week as domestic violence campaigners say 12 years of plans have barely changed anything.

A series of roundtable discussions this week and the national women’s safety summit on Monday and Tuesday will inform the Commonwealth and state and territory governments as they develop the next national plan for reducing violence against women and children. 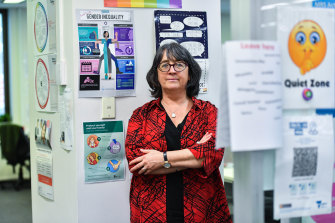 No to Violence chief executive Jacqui Watt says after 12 years there has been little reduction in violence against women and children.Credit:Joe Armao

This will be the fifth iteration of the plan, which was first developed in 2010.

Jacqui Watt, chief executive of the organisation No To Violence, says we “haven’t seen the dial shift” on the number of women and children being harmed over that time.

“Family and sexual violence in Australia is endemic. It’s a chronic issue. It’s not going away, if anything that might have got worse, and therefore it should be treated as something that’s business as usual for governments to find solutions to and provide funding for,” she said.

“We’ve had 12 years of a national plan on women’s and children’s safety so we’ve had a bit of time to think about what’s really important, what’s still missing, what action is needed at a national level to really drive progress.”

The open letter released on Thursday has been signed by 205 organisations and more than 5000 individuals, co-ordinated by campaigners Fair Agenda.

Their requests include increasing investment in specialist support services, giving programs long-term funding so they get enough time to work, expanding the focus on eliminating sexual violence, and expanding research to build up evidence-based services. The groups also want governments to prioritise Aboriginal and Torres Strait Islander community-led initiatives and to tailor other responses to community needs.

Ms Watt said there needed to be national data sets and standards to monitor progress and make sure programs offered value for money.

National Association of Services Against Sexual Violence executive member Heather Clarke said while initiatives to prevent sexual assaults were included in the fourth action plan, it needed to be a higher priority for governments.

This should include a nationally consistent definition of consent, strengthening respectful relationship education throughout schooling and giving schools the money to hire specialist educators, expanding timely and integrated responses for sexual assault victims, and implementing all the recommendations from the [email protected] report on workplace sexual harassment.

“[We’ve seen] the flood of disclosures and sharing from young people, from people, really, in all walks of life about the epidemic extent of sexual violence in so many domains of women’s lives,” Ms Clarke said.

“Obviously, there’s still a long way to go. It’s promising, but there are really clear steps that the government can take that would make a big difference.”

On Wednesday, the government defeated a bid by Labor and the Greens to change its [email protected] legislation to include a positive duty on employers to stamp out sexual harassment in their workplaces.

The duty exists in work health and safety laws but Sex Discrimination Commissioner Kate Jenkins recommended it be added to anti-discrimination laws.

Australian Council of Trade Unions president Michele O’Neil said the existing WHS law was failing to do the job. She’s been lobbying Attorney-General Michaelia Cash and Women’s Safety Minister Anne Ruston for the change but said they had not been receptive.

Greens Senate leader Larissa Waters noted the vast majority of submissions to a parliamentary inquiry into the bill had called for the positive duty.

But Senator Cash said there needed to be more consultation before the change could be made to make sure it wouldn’t increase complexity for people seeking protection.

“The government has prioritised those reforms which could be implemented quickly and easily,” she told the Senate. “More complex reforms will require more consideration and consultation.”