HIGH-cost credit lenders are targeting households in areas where the most people struggle to be accepted for affordable borrowing, a new report has found.

Families in the North of England are most vulnerable to the effects of sky-high interest rates charged by loan sharks and payday lenders. 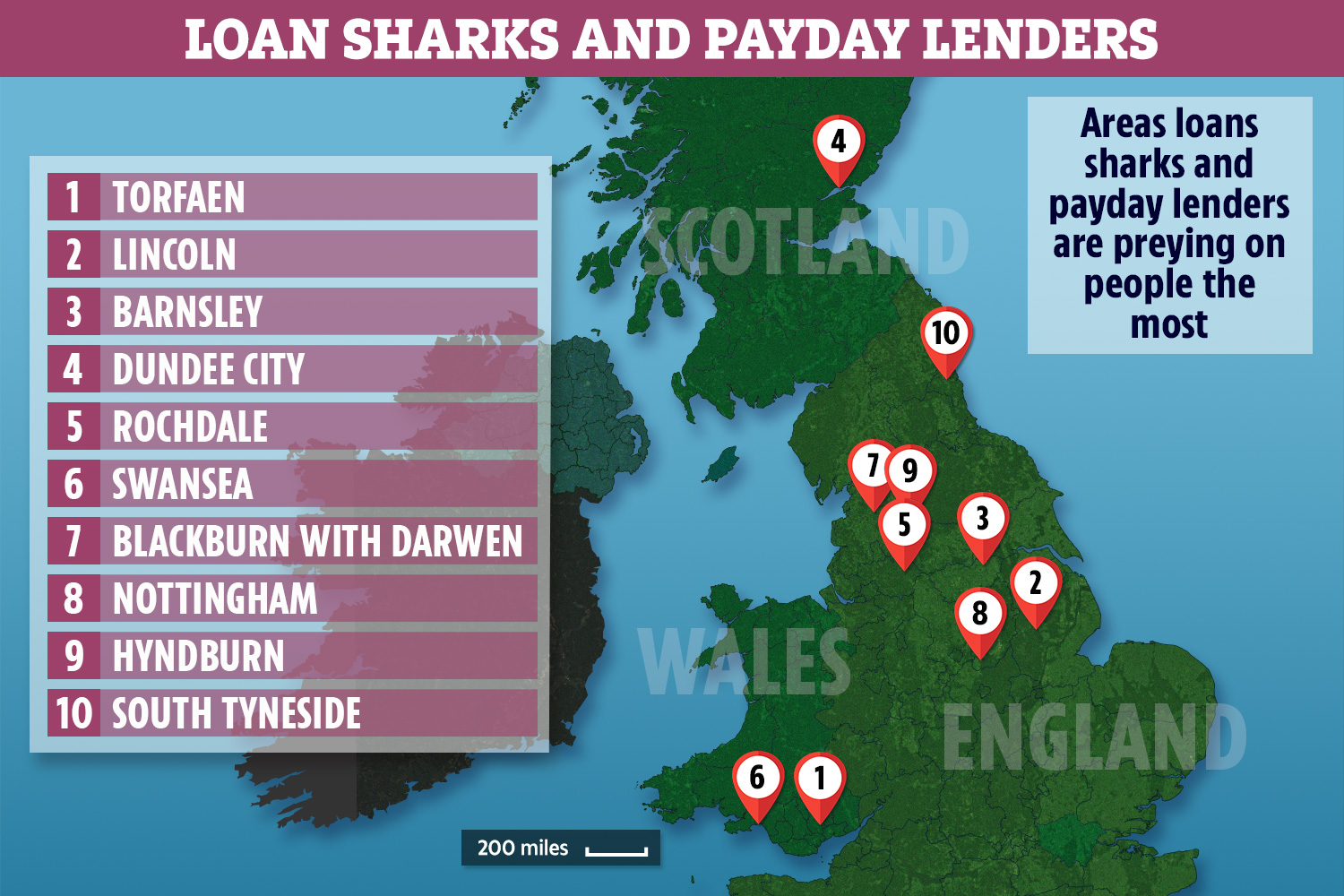 Demos think tank identified 29 "credit deserts" around the UK – these are areas where households have low credit scores, an overwhelming need to borrow cash and where there is a high concentration of high-cost lenders.

It's not to say that the regions identified don't have access to banks, credit unions and building societies, but some residents may not be able to access these services due to their low credit scores.

It means these people are more likely to turn to high-cost lenders for help, and as a result, more of these creditors have set up shop there.

The rip-off interest rates on these loans can in turn push vulnerable people further into debt.

The 29 'credit desserts' in the UK

THESE are the local authority areas identified by Demos as being preyed on the most by high-cost lenders.

These towns and cities have the most number of people with low credit scores, high concentration of high-cost lenders and there is a clear need for borrowing.

Fifteen of the local authorities were in the North of England, and included cities such as Liverpool, Rochdale, Sunderland and Blackpool.

Wolverhampton, Nottingham and Lincolnshire were among the six credit deserts in the Midlands, while a further seven are in South Wales, such as Swansea and Torfaen.

Dundee is the only one found in Scotland, while none were identified in the South of England.

But the think tank said that not all low-income areas are credit deserts as some benefit from high levels of home ownership.

In the same way, some middle-income areas can have seriously low credit scores, for example, because they have a high student population or that employment isn't always stable, making it harder to borrow.

How to get affordable credit

REMEMBER before applying for a loan, borrowing money and failing to keep up with repayments can have a big and long-lasting effect on your finances.

It could prevent you from buying a house or getting credit again in the future.

Here are some alternatives to high-cost credit:

Credit Unions – These are small not-for-profit groups that help people save and borrow money, and you may be able to get a loan. You can find out which credit union you are eligible to join by searching here.

Fair For You – You can buy household items on credit through Fair For You, a not-for-profit company that is owned by a charity. It's an altertive to rent to own firms that doesn't charge any late payment and rewards punctual ones. The pay weekly or monthly site charges 51.1 per cent APR compared to up to 69.9 per cent at BrightHouse, or 119.9 per cent at PerfectHome.

Lower-cost lenders – Firms like Scotcash, Fair Finance and MoneyLine lend to borrowers with a poor credit history at lower rates than most payday lenders. For example, Scotcash charges 246.6 per cent compared 1,293 per cent at Sunny loans.

Boost your credit score – If you're never rejected for credit then there are ways to show lenders that you can be responsible with your cash.

The report also found that the number of high street lenders operating from a shop is lower than it's ever been before, with only two out of seven larger lenders still paying out payday loans – but all of them are still operating online.

Unfortunately, Demos says there's no "one size fits all" solution but that local governments can business can do more to improve each area's credit experience.

Author of the report, senior researcher Sacha Hilhorst, said: "The Good Credit Index shows this is not just a matter of personal finances, but also geography.

"In places where insecure contracts are the norm and payday lenders are abundant, people face very different choices from people in credit havens.

"To break these cycles of credit is disadvantage, we need systemic change as well as place-based strategies."

StepChange has warned that credit building card lenders are pushing thousands of customers into spiralling debts.

It comes as rip-off credit card rates left one mum £12,000 in debt, just two years after taking her first one out.

Last year, The Sun revealed how card firms are stinging customers looking to improve poor credit scores with high interest rates of up to 70 per cent.