Home » Lifestyle » Thai cave rescue movie is gripping, but leaves many heroes out

The title, although clunky, refers to the 12 Thai boys and their football coach who were rescued from the caves in northern Thailand in July 2018. A more appropriate title might be 10,000 Lives, as that’s how many people helped with the rescue effort.

Inevitably, a lot of people are left out of Ron Howard’s gripping, generally accurate re-creation of the story. The screenplay is by English writer William Nicholson, whose credits include Gladiator, Unbroken and Everest. The casting gives us Colin Farrell as John Volanthen and Viggo Mortensen as Rick Stanton, the two British cave rescue divers who found the children four kilometres inside the cave. They had by then been trapped for 10 days, without food. 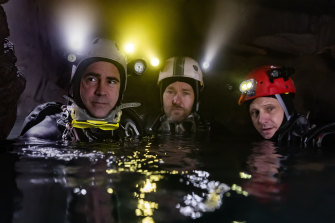 Colin Farrell (left) as John Volanthen, Joel Edgerton as Harry Harris and Viggo Mortensen as Rick Stanton in Thirteen Lives, which was filmed in Australia and Thailand.

About halfway through the 147-minute film, Joel Edgerton joins the other divers as Australian diver/anaesthetist Dr “Harry” Harris after Volanthen realises they will have to sedate the boys to get them out. Craig Challen, diving partner of Harris, played a significant part in the rescue, but he’s nowhere to be seen.

Three other British divers have significant roles: Kevin Spink as Josh Bratchley, Tom Bateman as Chris Jewell and Paul Gleeson as Jason Mallinson. Nicholson leaves out the rest of the Australian contingent, not to mention the Chinese, Czech, Finnish, Danish, Belgian, French, Canadian, Indian, Israeli, Japanese, Dutch, Russian and Ukrainian divers who went into the cave to help. There were more than 100 divers in those caves, most of them Thai.

Howard has said he tried hard not to make a white-men-to-the-rescue film, and to some extent he succeeds. Thai Navy SEALs have a major presence. The Thai actors speak Thai with subtitles rather than casting actors who can speak English.

The politics of national pride play a major part in the story. Howard makes sure we see the Thais working in every facet of the rescue, including a heroic, largely civilian effort to stop the flow of water into the cave from above the boys. The two men who died were Thai rescue divers. Howard recreates the death throes of Saman Kunan, the retired SEAL who came back to help, in agonising detail.

Much of the film was shot in Australia during the pandemic. Howard could not go to Thailand for scenes shot there. Apparently he directed by Zoom, which must be some kind of first. His work, as ever, is fabulously efficient — keeping tight rein on the sentiment, but not so tight that we miss it — and building tension to an agonising, almost paralysing degree. Even when we know the outcome, Howard succeeds in squeezing every drop of dramatic tension out of the narrative.

It’s not much of a character piece because there isn’t time. Howard has a lot of story to tell and there are few directors in Hollywood with such control of classical technique. Even if you’ve seen the excellent documentary from last year, the film is gripping. And we’re not done yet: Netflix is soon to debut a six-part series, with all new cast and crew. Apparently Craig Challen gets a role in that one, at least.

Thirteen Lives is streaming on Amazon Prime Video from August 5.