“Campus” is the word of the week. “My vision,” Art Gallery of NSW director Michael Brand wrote in a book to mark the launch of the gallery expansion, “has been for the Sydney Modern Project to transform the Art Gallery of NSW into an art museum campus with seamless connections between art, architecture and landscape.”

“My vision” sounds suitably grand but “campus” is harder to track. It’s Latin for “field” but almost always associated with a university. The only references I’ve been able to find for a “museum campus” are Chicago, where three science museums are clustered in a park alongside Lake Michigan; and the Clark Art Institute in Williamstown, Mass. where there has been a concerted effort to connect the art museum with the landscape.

Apparently, Sydney now has its own “campus” comprising three compartments of the same institution. The third element is Jonathan Jones’ “art garden”, which will be ready midway through next year. The “campus” idea is borrowed, just as the name Sydney Modern is borrowed from Tate Modern.

“Around our central focus on the work of art we can now spin a sense of the movement of both people and ideas through buildings and landscape,” the essay states. Spinning is a revealing choice of verb in an essay that reads like a prospectus for a new residential and retail development.

Sydney Modern may be a permanent fixture on the city’s physical and cultural landscape, but in some ways, it feels as insubstantial as a Hollywood set. We’ve been assured that the $344 million SANAA building is perfectly integrated into the landscape, but during the past week, I’ve read or heard comments by five architectural experts who would argue the opposite. These criticisms should at least be aired and refuted, if possible, but there has been such a fanfare that dissenting voices haven’t dominated.

The part of the project that is completely praiseworthy is the revamped AGNSW library, which is the best of its kind anywhere in Australia.

The greater museum’s future is pure fantasy, so rather than continue to speculate about success or failure, it might be better to look at some other aspects of the project, such as the new works the AGNSW has commissioned from nine artists. Of the pieces yet to be discussed the least interesting is probably Yayoi Kusama’s large flower on a site overlooking Woolloomooloo Bay. This is hardly more than a cheerful decoration by an artist whose public sculptures may be seen all over the world nowadays. 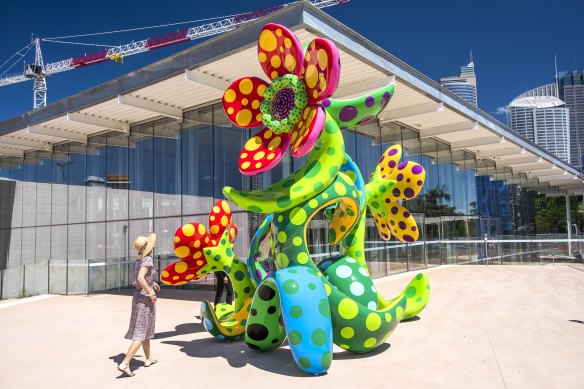 Yayoi Kusama’s Flowers that Bloom in the Cosmos, commissioned for Sydney Modern.Credit:Steven Siewert

Among the local commissions Lorraine Connelly-Northey has shown on previous occasions she is capable of working on a large scale, and her wall sculpture, Narrbong-galang (many bags), makes good use of an awkward space. Ten yellow-stained slabs of metal hung in a corridor on the entrance level of the building seem to be arranged for the benefit of passersby, who can view them from outside through a long window. If this succeeds, it’s because these schematic metal “bags” sit flat to the wall. Together they feel like memorials to the vanished hunter-gatherers who once roamed these shores.

A suite of paintings by Richard Lewer, recording the people who helped build Sydney Modern, will seem less relevant as the museum ages, but for the time being they have an appealing freshness, showing us some of the lesser-known faces behind the project.

The two most engaging commissions, in their different ways, are Lisa Reihana’s GROUNDLOOP, and Lee Mingwei’s Spirit House. Reihana came to worldwide attention when her video installation, In Pursuit of Venus, was one of the hits of the 2017 Venice Biennale, and GROUNDLOOP, a fantasia of the Pacific, is an excellent sequel. 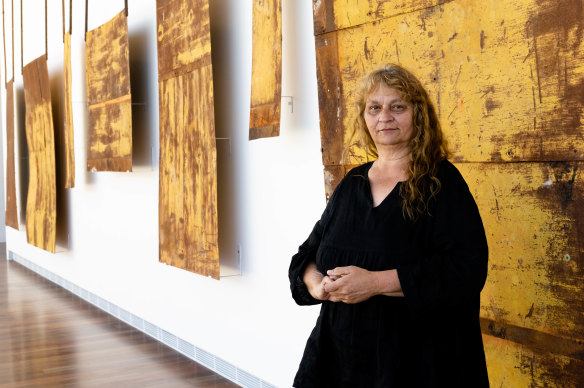 The piece is displayed on a vast screen, viewable from level -1, although partially obstructed by columns. It represents more than two years’ work and incorporates the same production values one might expect to find in a blockbuster motion picture. If Reihana manages to stay on the right side of the Marvel Cinematic Universe, it’s possibly because she’s given us no exploding planets or cosmic monsters, unless one counts a large pelican that emerges from beneath the sea. What’s most impressive is the level of detail, with costumes, sets and choreography, not to mention a range of references that invite scrutiny.

If Reihana’s piece is information-heavy, Lee Mingwei’s Spirit House is little more than an earthen chamber tucked away by the side of the building, in which we encounter a seated Buddha. There’s a great serenity about this installation, which seems to transcend the hubbub of styles on display, inviting viewers to pause for a moment of introspection. Visitors are invited to take a stone from the Buddha’s palm, carry it home, load it up with their anxieties, then bring it back. I’m looking at one right now, although it’s going to take some time before I’m through with it.

To view the other two commissions, Simryn Gill’s Clearing and Karla Dickens’ To See or Not to See, visitors will have to tear themselves away from Sydney Modern and return to the old building. As part of the Sydney Modern Project, the original AGNSW has been completely rehung in a rather startling manner, but more of that later. 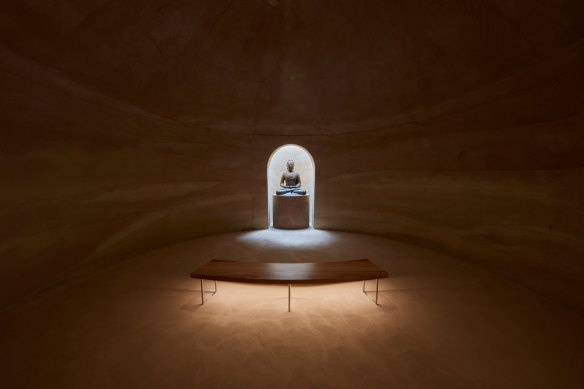 Like Richard Lewer, Gill has applied herself to the actual building of Sydney Modern, looking at a single palm tree that was uprooted to make way for the new museum. It’s a reminder that when something is gained, something else is lost. The building’s critics will tell you that a precious area of greenery and part of the Botanic Garden has been obliterated. Gill ventures a more general observation that the objects of the natural world have their own distinctive history and there’s a pathos in the fall of an elderly tree. From this idea, she has produced a 26-metre rubbing and a series of supporting works that take up a space large enough to accommodate an entire plantation.

Karla Dickens has made her reputation in recent years with bold, irreverent sculptural installations on a grand scale. This didn’t make her an obvious choice to create a discreet piece to sit above the entrance to the old building. She has come up with an eight-metre steel and glass panel featuring six hooded faces. The reference is to the hoods used on boys in the Don Dale Youth Detention Centre in Darwin. 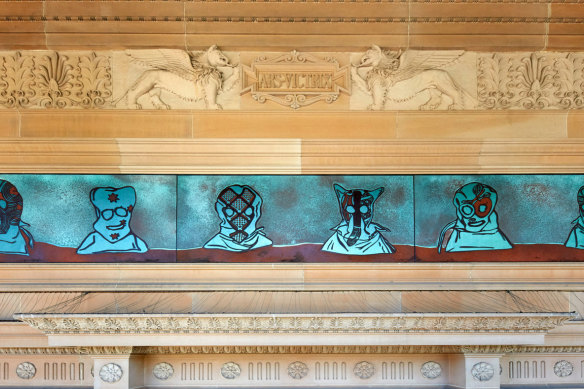 Karla Dicken’s glass relief, To See or Not to See.

Dickens says her work is for the “invisible people”, for her Indigenous ancestors, “for queers, and for forgotten artists that do not fit the status quo.” It’s a provocative gesture for a piece on the front of a major public institution because it actively bites the hand that feeds. The AGNSW has been as guilty as any museum when it comes to rendering people “invisible”, so Dickens’s work is presumably meant to symbolise a new openness.

This is right in line with the globalising philosophy of the Sydney Modern Project. The old building continues the strategy of mingling Australian with international art, juxtaposing the historical and the contemporary, and placing Indigenous items in every room. It’s an attempt to break down conventional categories and disavow the institutional preference for works in an established western tradition. One may appreciate this impulse to a certain extent, but when a museum decides to abandon the idea of a canon of artists that define a style and an era, the hang becomes so democratic that any one thing seems as good as the next. 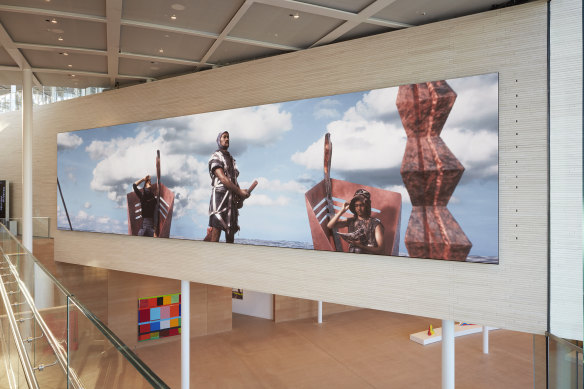 There’s still much to enjoy in the new hang, such as the placement of Thea Proctor’s The Bathers (circa 1925), alongside Tsuruta Goro’s Contemporary Women Divers at Rest 1935. It was also an eye-opener to see Sidney Nolan’s Self portrait (1943), in relation to Head of a Man (1957) by British artist Cecil Collins. There’s no tangible connection between any of these works, but the visual affinities are remarkable. It’s a trick repeated many times, as the curators have enjoyed finding these unusual relationships.

On the other hand, there is such a quantity of work by Frank and Margel Hinder that an overseas visitor would imagine the couple were the most important modern artists in Australia. I did, however, enjoy seeing a painting by Kerry Gregan hung alongside Tony Tuckson and Aida Tomescu. There’s a genuinely forgotten artist who deserves another look.

I could go on citing good and bad examples, but a periodic shake-up of the hang is a valuable exercise that allows us to rethink the way we relate to art and artists that have grown too familiar. It’s more problematic when such hangs become the only thing the gallery has to offer – a kaleidoscopic display that becomes tedious without a firm sense of place and chronology. Those associated with the Sydney Modern Project seem to believe audiences will keep returning simply to look at the fun things they’ve done with the collection. They won’t. 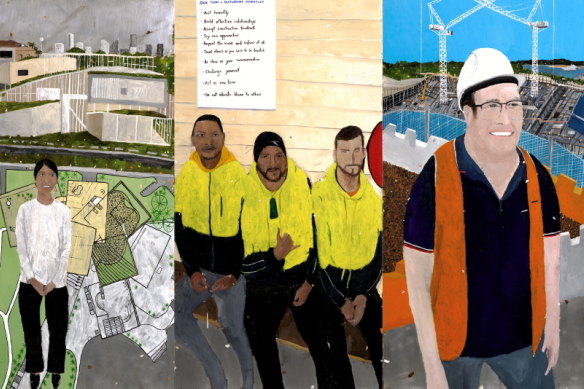 Nothing in either building dents my conviction that dedicated exhibitions are the most important requirements for a successful museum. Treating the permanent hang as a quasi-exhibition is not a viable option.

For those of us who still believe in the quaint, old-fashioned idea that one of the pleasures of the museum is the quiet contemplation of works of art, Sydney Modern’s new, entertainment-plus approach presents a few challenges. With major art institutions today, the balancing act is to be dignified but not boring, popular but not vulgar. The Sydney Modern project, for all its instant popularity, is already walking this tightrope. A little spin might help the spectacle, but it also adds to the degree of difficulty.

To read more from Spectrum, visit our page here.