Home » Lifestyle » Sure, there are downsides to public transport, but lots is right on track

I've had a recent change in lifestyle that is both utterly common and profoundly significant. I have – get ready, it's pretty big news – recently returned to public transport as my most commonly used A-to-B.

I know, big whoop, right? Millions of people use public transport every day, either by choice or necessity, and they don't carry on like they've earned a Bravery Award. I agree, but I've had enough friends react in a "why would you do that?" way that I'm led to believe I'm doing something a bit weird. 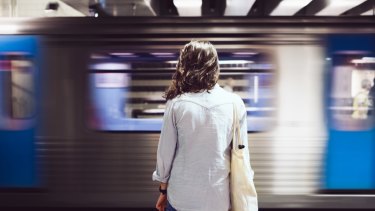 I love connecting with people. I love the camaraderie of a packed train after the footy, and I’ll never forget the pre-teen buzz of the train ride with my daughter to the Taylor Swift concert.Credit:Stocksy

One mate has bet me I can't last a year; another assumed I'd lost my licence!

The truth is my car died over summer, at a time when I was happy to take advantage of living within walking distance of train, bus, tram, school, shops, coffee and wine – all the essentials – and I got used to the slower pace. I should mention we only have one child. We're not juggling three kids and 3000 weekend sporting activities, so it's easy to be nicer to the planet and just get on a train.

I admit it's about as newsworthy as a reality TV star's new haircut, but it's been a big enough shift in lifestyle for me to make some observations.

First, catching public transport really can stink. Especially that last tram I was on. Also, some days arriving on time is about as likely as arriving in another dimension. And for some reason, all the worst manners are on trains: there are the Pusher Inner-ers, the Leg Spreaders, and the Loud Talkers (I'm talking to you, woman at the end of the carriage who doesn't want to be her sister's matron of honour. Do you want me to tell her for you? Otherwise, shoosh!) The Nose Sniffers really grind my gears. I mean, carry a tissue – and USE IT!

Then there are the Random Yellers, randomly yelling random things to random targets. Most of the time I find them non-threatening – just a dude, trying to get rid of the voice in his head. Some days I can relate. But the energy in that confined shared space is unmistakable: what if random turns truly scary? We sit on the edge, waiting, tense and alert, the result of the collective frightening experiences most women have had.

I've been travelling by train since I was 12. I've lost count of the times I've sat rigid with fear. This is the dark side of public transport that can't and shouldn't be ignored. All commuters must be safe. End of story.

Thankfully, though, in this current version of Life on the Rails I've had nothing but positive experiences, and I'm growing to love it. It's so much more relaxing, not driving through traffic. I love sitting idle, in my own thoughts, staring out the window at tiny snippets of other people's lives. It's amazing how much you can see as you speed by. Couples in love, or breaking up. Laughing mums, a cranky toddler. A driver picking their nose at the traffic lights. It really does lift your soul.

Mostly I love connecting with people. I love the camaraderie of a packed train after the footy, and I'll never forget the pre-teen buzz of the train ride with my daughter to the Taylor Swift concert. All the little girls, dressed like slightly older versions of themselves, giggling and chirruping with bursting excitement. Best part of the concert, to be honest.

I wish I could explain that joy of connection to all the screen addicts on our trains. "LOOK UP! LOOK OUT!" I want to Random Yell.

I want them to know I have friends today that I made on the train in high school. Twenty years ago, I fell in love with my husband while catching the tram to work together. And the other day a woman tucked in the tag on the back of my top, thereby becoming the nicest person on the planet and the latest addition to my will.

PT isn't easy. Some days you hate it. But at its best, public becomes community. And you don't get that in your car.

This article appears in Sunday Life magazine within the Sun-Herald and the Sunday Age on sale July 7.