Home » Lifestyle » Summer has arrived, but Sydney’s cool spell is here to stay

As storm clouds rolled in on Monday, Sydneysiders’ memories of a weekend spent at the beach may have faded. It’s been cooler than usual and that is set to continue, with rain forecast to return during the week.

Sydney’s Observatory Hill recorded a maximum temperature of 28 degrees at 2:30pm on Monday, but even that was below average, according to meteorologist Dean Narramore from the Bureau of Meteorology. 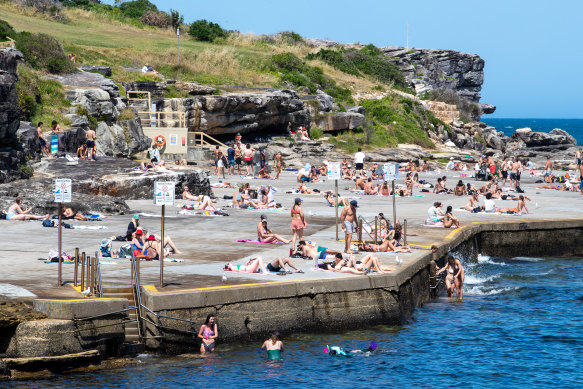 Sydneysiders flocked to Clovelly Beach to enjoy the warm weather on Monday.Credit:Edwina Pickles

“It would normally be about 30 degrees by now,” he said. “We’re noticing a cool trend in our December outlook, and we’re expecting below-average temperatures for this month.”

The cooler temperatures in recent days are a result of south-easterly winds which carry colder air from the ocean onto the land.

“Instead of the wind coming off the land and dragging heat to the coast, the wind is coming more off the ocean,” Narramore said.

That’s forecast to continue throughout this week, as maximum temperatures sit between 21 and 28 degrees, peaking on Wednesday.

The south-easterly winds are also bringing more moisture closer to the land, contributing to greater rainfall.

The Bureau of Meterology is forecasting a 60 per cent chance of a shower or two on Tuesday this week and Monday next week.

“Sydney had a really wet summer last year, and it won’t be as rainy as that, but there will be slightly above-average rainfall,” Narramore said.

Sydney has already had an exceptional wet year, and in October smashed the previous annual rainfall record set in 1950.

The cooler weather and rainfall won’t prevent at least a few heatwaves during the summer.

“It doesn’t mean we’re not going to have hot days,” Narramore said. “There will still be days in the 30s.”

Areas in Sydney’s west and south-west have already entered that zone, with temperatures around 35 degrees in Penrith and Bankstown on Monday afternoon.

While the average minimum temperature at Observatory Hill hasn’t fallen below 15 degrees in the first five days of summer, it’s yet to reach the highs from December last year.