Victoria’s public sector wage bill soared past $30 billion in the past financial year, with the cost of fighting the pandemic and wage deals won by government workers blamed for the 10 per cent year-on-year increase.

Despite the extra spending, the state’s public sector finances were recovering before the latest lockdown hit, finishing the 2021 financial year with the government’s net debt at $72.7 billion and its budget $14.6 billion in the red. 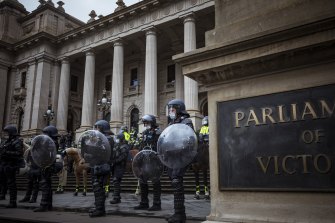 The figures from the state’s Annual Financial Report published on Friday morning were an improvement on the predictions in May’s budget which forecast $77.5 billion in net debt and a $17.5 billion deficit.

But the new budget data covers the 12 months to June 30 and does not reflect the fresh blow to the economy and its impact on the budget from Melbourne’s sixth lockdown, now in its third month.

The pandemic has ravaged government budgets across the nation, plunging all the states and territories, except Western Australia, and the Commonwealth deep into deficit and leaving them heavily indebted, with Victoria faring worse among the jurisdictions.

Total government spending in the financial year soared to $87.2 billion, an increase of more than 17 per cent on the previous 12 months, when $75 billion was spent. In 2019, the last year before the coronavirus stuck, the total was $68 billion.

An unprecedented $15 billion was spent on state government capital works in 2021, which Treasurer Tim Pallas claimed on Friday was a key factor in keeping the economy functioning through the COVID-19 crisis.

The public sector wage bill soared again by more than $839 million to top $30 billion, more than 10 per cent – or $2.8 billion – higher than the previous year,

Treasury and Finance blamed the increase on “additional resources in the health sector for the COVID-19 response” as well as pay rises won by government employees in new enterprise bargaining agreements.

The surge of punters back to the pokies in December and January, after Melbourne’s long lockdowns ended, drove taxes on losses on the machines up to $665 million, more than $77 million above expectations.

Mr Pallas said the report demonstrated the state’s “strong fundamentals”, saying Victoria was in good shape to recover from the latest lockdown.

“We bounced back after previous lockdowns and we will again.”

But the state opposition was scathing on Friday about the final budget outcome, with Treasury spokesman David Davis describing the growth in the wage bill as “startling”.

“The eye-watering deficit of $14.7 billion should concern all Victorians, and much of the large capital spend is being mismanaged with project cost blowouts now a sad norm under Labor,” the Liberal frontbencher said.

”Despite the COVID hit, the Victorian government took more tax, from payroll … and $473 million more in stamp duty.“