In his first television interview since the record-breaking Netflix show, Oh Yeong-su revealed he doesn’t even have a manager.

He captured and broke — and, presumably, allowed the stabbing and even harvesting of — hearts in Squid Game as Player 001, Oh Il Nam.

In his first televised interview since the Netflix drama shot him to mega-stardom, 77-year-old Oh Yeong-su has revealed he doesn’t even have an agent.

The actor claimed he’s been inundated with offers for commercials, but he isn’t rushing into anything.

“I feel like I’m floating on air,” he told Korean show “How Do You Play?”. “It makes me think, ‘I need to calm down, organize my thoughts, and hold myself back right now.'”

“So many people have been contacting me,” he shared, per Soompi, “and because I don’t have a manager to help me, it’s hard for me to handle the volume of calls and messages I’ve been receiving. So my daughter has been helping me.”

“Things have changed quite a bit,” he added. “Even when I go out to a café or somewhere like that, I now have to be aware of [how I appear to others]. It’s made me think, ‘Being famous is tough, too.'”

Responding to previous praise from co-star Lee Jung-jae, who played main character Seong Gi-hun, Oh Young Soo shrugged off the commendation he was a “senior actor with a youthful mindset”, claiming: “I was the only older cast member, and all the other actors were young. Since I was among them, I went overboard in pretending to be young in order to match their energy.”

He revealed that some of the actors actually played the infamous dalgona game between takes, in which players have to poke out a predesignated shape in a thin sugar treat using a needle without breaking it (the stakes being a little higher in Squid Game). 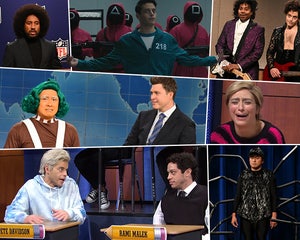 “There were some actors that did that,” he recalled. “While filming this drama, it felt like all the actors were returning to their childhoods. We had fun playing like grown-up children. It was a happy time.”

“Squid Game” is Netflix’s most watched show ever: more than 142million tuned in during the first month alone, almost twice as many as previous record holder “Bridgerton”.

Later in the interview, the septuagenarian was asked to share his philosophy on life — and brought host Mijoo to tears while doing so.

“Our society often only acknowledges first place, as if everyone else doesn’t matter. As if only first place exists, and second place is meaningless. But even though second place lost to first place, second place also beat third place. So everyone is actually a winner. That’s why I think a true winner is someone who is working hard at the things they want to do and attempting to reach a certain state on the inside. I feel like that kind of person is a winner.”

“I don’t have any grand ambitions,” he continued. “Big or small, I’ve received a lot of things while living my life. Now, I want to leave behind those things that I’ve received. To put it simply, let’s say you go to a mountain and see a flower. When we’re young, we pick the flower and take it for ourselves. But by the time you reach my age, you leave it there exactly as it is, and you go back to see it again later on. It’s the same with life. Leaving things exactly the way they are. It isn’t easy.”

His ‘second place matters’ sentiment, while beautiful, obviously does not apply in the Squid Game!